A spooky seaman’s tale, The Isle screened at Norwich Film Festival in 2018 with an introduction from co-writer and director Matthew Butler-Hart. Butler-Hart describes the film as influenced by slow-burn horror of the 1970s, and he also spoke about the inspiration for the story — Eilean Shona, an island off the coast of Scotland that had a thriving community until the mid-nineteenth century, at which point people started to leave. A stranger was murdered, various myths circulated, and the population dwindled.

From this premise, Butler-Hart crafts a tale of haunting, grief, guilt and fear, while also promoting Eilean Shona where most of the film was shot. As a tourist piece, The Isle certainly offers some beautiful landscapes that provide a stunning backdrop. This is the tip of the iceberg in terms of production, as Butler-Hart recounted to this writer some of the trials involved in the shoot. After a three-hour drive from Glasgow to the Scottish coast, cars containing cast, crew and equipment had to be loaded onto boats that then navigated the sea in gale force winds. During the three-week shoot, weather conditions on Eilean Shona changed regularly from suitable to utterly appalling. This uncertainty feeds into the film’s drama, as the island is an eerie place where one can imagine mysterious and even malevolent forces rising, so it may not leap to the top of favored vacation venues.

These mysterious forces invoke Greek mythology while also drawing upon folk horror, The Isle proving to be an intriguing blend of generic and narrative borrowing. Opening with the sound and images of the sea, the film introduces the viewer to its three central characters, survivors of a shipwreck drifting through a cloaking fog. Upon landing on an unfamiliar shore, they find shelter (and porridge/oatmeal) with the locals, but quickly learn that all is not what it seems. Of these locals, the men are weird, the women even more so. Clearly there is danger, but who or what is the source? As the three sailors explore the island and seek a means to escape, they steadily learn that returning to the mainland may be even more difficult than navigating in a fog.

The central trio of shipwrecked mariners are engaging and relatable, as well as being varied. The ostensible leader of the group, Oliver Gosling (Alex Hassell, “Suburbicon”), tries to adhere to a chain of command. The more nervous Jim Bickley (Graham Butler, “Miss in Her Teens”) has frequent bursts of anger, which become increasingly understandable as events spiral out of control. Perhaps the most likable of the three is Cailean Ferris (Fisayo Akinade, “The Girl with All the Gifts”), an affable and slightly nerdish figure, whose race is not an issue for his friends but a pleasing contrast to the whitewashing of many a period film. Of the islanders, Douglas Innis (Conleth Hill, “Salmon Fishing in the Yemen”) provides the standard curmudgeon, although softened with the necessary donations of rum. Fingal MacLeod (Dickon Tyrrell, “Globe on Screen: Julius Caesar”) is both hospitable and a very convenient documentarian, as his diaries provide vital clues to the mystery of the island.

The standouts of the film, however, are the female characters, Lanthe Innis (co-writer Tori Butler-Hart, “Keeping Rosy”), Korrigan McLeod (Alix Wilton Regan, “The Heartbroke Hitman”) and, in brief but highly significant appearances, Persephone (Emma King, “The Vanishing”). These women embody allure and mystery in equal measure, peculiar flashes in their eyes as well as striking familiarity with the shipwrecked sailors highlighting their uncanny natures. This is a standard trope of gothic and horror fiction — the dangerous women who simultaneously tempt and threaten the men. The film’s best jump scare comes during a scene that features both these elements, and even though the viewer may see it coming, the scare is nonetheless effective.

The film is not especially original in its inclusion of generic tropes, but Butler-Hart does use these tropes in an interesting fashion. As the mariners learn more about the history of the island, the viewer is treated to a horrific display of toxic masculinity. With this greater knowledge, the danger posed by the women is understandable and even justified, Lanthe and Korrigan presented as much victims as villains. While this is an interesting spin on the haunted environment/temptress tropes, The Isle does suffer in places. Butler-Hart’s direction is uneven, sometimes veering awkwardly from banter to dread. Horror and comedy are a difficult balancing act, and the release through comedic interludes jars with the slow build-up of dread. Further jars are caused by discordant editing patterns that are more aggravating than unsettling. There is also a lack of period feel, the characters often seeming anachronistically contemporary in their dialogue and behavior, especially in comparison to other historical dramas such as “Lady MacBeth” and “The Woman in Black.”

Despite these problems, overall The Isle is an effective chiller. That the film was put together is a major achievement, and there is enough good stuff to check out in terms of creepy atmospherics, critical gender politics and ravishing landscapes. It also bodes well for whatever the writing-directing/acting team of the Butler-Harts will deliver next. 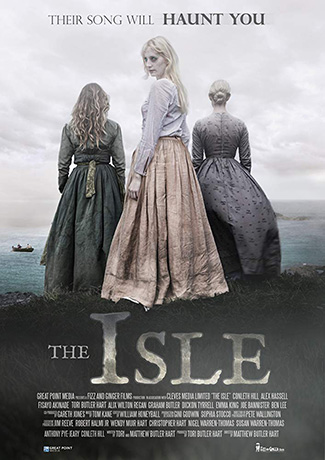