The Woman in Black, directed by James Watkins (“Eden Lake,” “My Little Eye”) and written by Jane Goldman, is a cinematic adaption of Susan Hill’s popular novel of the same name. Daniel ‘Harry Potter’ Radcliffe plays a young widowed Victorian lawyer named Arthur Kipps, who is forced to leave his young son in London with the nanny to venture to Eel Marsh House to settle the affairs of his recently deceased client, Alice Drablow. As to be expected, Arthur finds a lot more than he bargains for on arrival to the village. It’s not just the death of Alice Drablow he is confronted with, but also an entire village that lives under the constant shadow of death as they regularly lose their children to unexplained suicides. It’s so prevalent in fact, that many villagers, driven by fear, now keep their children barricaded indoors in an attempt to ensure their safety.

When Arthur leaves the village behind and makes it out through the marshes to Eel Marsh House he is still haunted by the death of children, literally. He hears the screams of a drowning child and he sees the ghosts of decaying kids. He is also haunted by the ghostly spectre of a strange woman dressed in — you guessed it — all black. As Arthur returns daily to the house to process more of Alice’s paperwork the disturbances become increasingly more persistent and spooky. As he digs deeper, a link between Alice and the deaths of the villager’s children shows itself, panicking Arthur — he fears for his precious son, as he is soon to arrive at the village in a few days time. With no way to contact home to stop the visit, Arthur works feverishly to decipher the clues to put the ghost of the woman in black to rest for good.

For those of you who have read the book and seen the play, it’s safe to say that the film sits somewhere in the middle. Although the book is deemed a horror classic and was an enjoyable read, it never really delivered on the scare factor. The play, on the other hand, delivered a uniquely eerie atmosphere (beyond expectations for a live production). The Woman in Black takes viewers back to the times of good old-fashioned ghost story telling — it doesn’t go for in-your-face scares common to recent horror flicks. Instead the production takes its time using very slow build ups to create many tense moments that will have viewers on the edge of their seats.

A simultaneously beautiful and horrifying misc-en-scene filled with cobwebs and shadows indicated that ghosts were present all around the village before the woman in black had even made her first appearance. The children’s toys in the nursery played against Arthur as characters in their own right. Despite your average child’s toy being an inanimate object, those in the movie had a distinctly life-like quality — their eyes felt human and they seemed to have their own agenda. The jack-in-the-box specifically appeared to have a waxy human-like skin complete with wounds and blood.

On a negative, much in the same way as the actions of a stereotypical dumb, buxom blonde in an old 80’s horror classic, Arthur’s reactions to the ghostly screams and bumps weren’t entirely convincing. If by some unlikely chance someone was to find themselves alone in a house as creepy as Eel Marsh, they would turn and instantly walk away (and most certainly wouldn’t keep returning alone). And, on hearing a rocking chair rocking in a locked unused nursery, the last thing anyone with common sense would do is go and investigate. Arthur, well, he just couldn’t seem to help himself and plays right into these horror clichés.

Aside from wanting to see an old ghost story brought to life on the silver screen, part of the excitement of The Woman in Black was seeing how Radcliffe faired in his first outing since his turn as the boy wizard. It’s immediately clear that he was a smart choice for the role as he brought something contemporary to the old which gives the film an edge. His performance was contained, however, which left me wondering if he was simply struggling to reign in his “inner Potter” (I’ve since come to the conclusion that the role called for it).

Thanks to Radcliffe’s downplayed performance and Watkins choice to deliver the scares through methodical, old-school horror conventions, The Woman in Black is both terrifying and touching in equal measures. 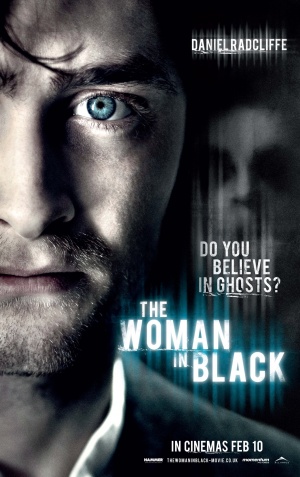