The Tale of the Princess Kaguya is famed film director Isao Takahata’s first movie in 15 years. A labor of love that’s been eight years in the making, it draws inspiration from the 10th century tale “The Tale of the Bamboo Cutter,” one of Japan’s oldest surviving narratives about a girl who magically comes to Earth from the moon. That might seem an inordinate amount of time to work on a film, but trust me, it’s time well spent.

The princess of the story starts her life (on Earth) in the form of a live miniature doll. Nestled in a bamboo shoot, she is discovered one day by Okina, an old man who makes his living cutting bamboo in the woods near to his humble home. It seems as though she’s destined for him and so he rushes her home to his wife, Ona, whereupon the Princess quickly mutates into a baby as if to fulfill a life-long need of the childless couple.

The magical girl grows at a surprisingly fast rate and the neighborhood boys nickname her “L’il Bamboo.” Despite her actually being named Princess by her adoptive family, she is a child that enjoys the simple pleasures in life and she can find beauty in most things. But when her father finds a stash of gold in the same bamboo shoot she was discovered in, he takes it as a sign that his daughter should not be living a basic country life and should instead be be raised as an aristocrat, befitting her circumstance and beauty. Against her wishes, he whisks her away to a palace in the city so she can be taught grace and etiquette.

Her new life is stifling. Expectations of females in a male dominated society are pushed upon her much like a prison sentence. There is no place for her free-spirited nature here. Life is so structured for her now that when five suitors come to woo her she has to receive them from behind a curtain. They are not allowed to even see her and she them. While her father thinks he is doing what is best for her, he doesn’t realize he is, in fact, losing her.

The main body of the animation is a bright and bold affair, a mix of vibrant ink sketches and watercolor washes reminiscent of Japanese hand-painted scrolls. It’s minimalistic, loosely drawn, free-flowing style stands in contrast with other wonderful Studio Ghibli efforts like “Grave of the Fireflies” and “The Wind Rises,” but is the perfect choice to capture Princess Kaguya’s child-like innocence (similar in look to the classic, “The Snowman”).

A dark, stormy color pallet coupled with vivid blurry scribbles depict Princess Kaguya’s anger with vigor when she eventually reaches her boiling point. Refusing to have her spirit squashed further, she storms out of the palace in a blind fury and into the forest bringing viewers one of the most visually arresting scenes of the entire film. Composer Joe Hisaishi’s soundtrack is the perfect accompaniment to the moment (and to the rest of the film).

Like the two disparate worlds Princess Kaguya finds herself torn between, The Tale of the Princess Kaguya screens in two distinct versions. One with English subtitles is voiced by Takeo Chii (the old woodcutter), Nobuko Miyamoto (his wife) and Aki Asakura (the Princess). The other is English dubbed featuring the voice work of Chloë Grace Moretz (“Carrie”) as the Princess, James Caan (“Cloudy with a Chance of Meatballs”) as her woodcutter father and Mary Steenburgen (“Last Vegas”) as her mother. You can take your pick, although immersive authenticity is found more with the former rather than the latter.

There are a lot of life lessons to be found within the unusual narrative construct of this magical film and watching some of them unfold is truly heartbreaking. And unlike films typical to the genre of animation (especially those with princesses), The Tale of the Princess Kaguya doesn’t tie everything up in a neat happy bow for us at the end. Life, magical or not, rarely plays out any other way. 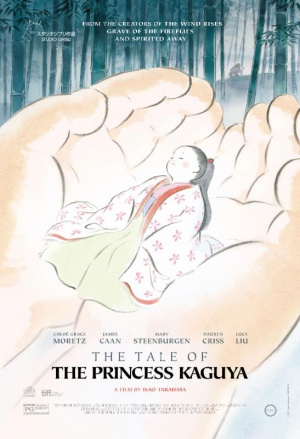