Filmmaker Margy Kinmonth’s new feature documentary Revolution: New Art for a New World should delight art fans and historians across the globe. It offers up a plethora of Russian Avant-Garde art from 1917-1932 to view from the comfort of your cinema seat (or home recliner) and simultaneously talks one through the accompanying history of this controversial period in Russian history.

It’s clear to see from the onset that this is an extremely well rounded and researched project with impeccably reliable sources — a must-have with any kind of archive based documentary. There are contributions from the collections of major Russian art institutions, contemporary artists and curators and we even get to hear from the direct descendants of the pioneering artists in question such as Chagall, Kandinsky and Malevich.

The documentary was filmed on location in Moscow, St. Petersburg and London in co-operation with the Royal Academy of Arts, London. Without having to travel to Russia, Revolution: New Art for a New World takes its audience inside The State Tretyakov Gallery, The State Russian Museum and The State Hermitage Museum. Also (as if this wasn’t enough of a treat for art lovers), the audience is privy to previously banned masterpieces that have not seen the light of day for decades.

The reasons behind Revolution: New Art for a New World?

Kinmonth’s initial, most driving inspiration was the film “October” by Eisenstein which she discovered to be nothing more than a propaganda exercise. Lenin discovered that art was a great means by which to spread his communist principles and therefore it ended up playing a central role in the Russian Revolution. With this in mind, Kinmonth knew there was a vital story to be told about the artists whose experiences were so meaningful and connected with these political events and the upcoming anniversary of the 1917 Russian Revolution (November 7th) seemed like the perfect time to do it.

Also Kinmonth’s previous documentaries (both TV and theater) definitely show her deep admiration for art and history, and to a lesser extent, an expertise on Russia. “War Art with Eddie Redmayne,” “Hermitage Revealed,” “Royal Paintbox,” “Outback Art: The Gold Rush,” “The South Bank Show” pepper her filmography over the past ten years. The contacts made and dues paid cataloging, investigating and admiring undoubtedly helped her to gain access to people, places and works not available to the average person. And the effort shows: The history and images congeal together beautifully to tell the tale with the contributions from the likes of Mikhail Piotrovsky, Zelfira Tregulova, Andrei Konchalovsky, Matthew Macfayden, Tom Hollander, James Fleet, among many others.

Revolution: New Art for a New World explains (and celebrates) how the modern work of the Russian Avant-Garde movement was in direct response to the utopian challenge of building a “New Art” for a “New World” in which myriad of colorful and inventive works were produced. And while Stalin’s rise to power 15 years later may have seen this freeing period come to an end, the movement clearly continues to — as it very well should — influence art to this day.

'Movie Review: Revolution: New Art for a New World (2016)' has no comments 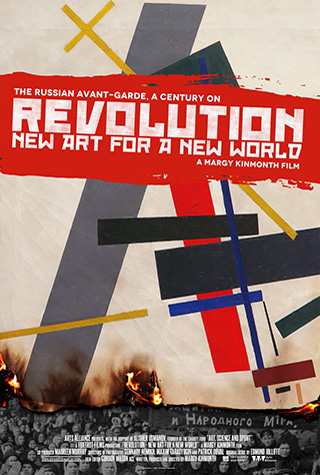