Sometimes gripping narratives detailing the familiar plight of teen girls do not necessarily have to be about the adversity of choice such as pregnancy, alcoholism, prostitution, domestic abuse, illiteracy or homelessness. There are youthful feminine coming-of-age stories that feel equally captivating in inspiration, determination and the spirit of competition and tradition.

In filmmaker Otto Bell’s soaring and beautifully shot first feature documentary The Eagle Huntress audiences are certain to become engaged by the true story of a gifted 13-year old Kazakh girl’s quest to explore uncharted territory by becoming the first female in many generations to earn the sacred title of eagle hunter . . . a distinction reserved for her older male counterparts. Refreshingly uplifting and revealing, Bell’s exquisite and challenging Mongolian-based documentary artfully juggles the perceptions of blossoming girl power, animal activism, familial norms/expectations and the jaw-dropping meditation of the world’s vibrant aerial landscape steeped in both picturesque tranquility and turbulence. Indeed, The Eagle Huntress is a rewarding character study particularly for the legions of young girl’s encouraged to explore their boundaries beyond the perceived societal confines of restriction.

As narrated and co-produced by English actress Daisy Ridley (“Star Wars: The Force Awakens”), The Eagle Huntress specifically spotlights Aisholpan Nurgaiv as she strives to achieve her ultimate goal in hunting game with the accompaniment of her trusty feral eagle. This goal, as it happens, will also override the gender barrier linked to the 12 generations in her Mongolian tribe’s backstory where only the males are allowed the privilege for intense gaming. Thankfully, the young gal is blessed with support from her family to pursue her huntress ambitions. Importantly, Aisholpan has the guidance of the male members of her family to supply the training foundation for her craft as it is known that Aisholpan has big shoes to fill in her eagle-hunting endeavors — her father has scored countless accolades for his hunting prowess.

The colorful journey that the courageous Aisholpan undergoes as a ground-breaking female trying the crack the untested Mongolian masculine code of dominance with the breathtaking backdrop of the Altai Mountains is certainly praise-worthy enough. However, what makes Aisholpan also so unique and cherished is that she is a mere child out on a very grown-up adventure. This crafty kid will accept nothing less than what she sets out to gain in her proud role as fierce huntress to be reckoned with at large. Still, we also see that despite Aisholpan’s eagle-hunting ambitions and her navigating around the so-called “girly” assigned duties (such as perfecting her homemaking skills in the manner of her beloved mother) she is very much a typical product of an impressionable youngster that probably would appreciate what her contemporaries crave — the attention of the opposite sex, applying nail polish and harboring reverence for her domesticated mother who serves as a role model.

Although it is clear that Aisholpan is the treasured and true centerpiece that resonates so effectively in The Eagle Huntress, the film produces other relevant elements worth the price of admission. For instance, cinematographer Simon Niblett’s sweeping and sensual camera captures the scenic crystal blue skies meshing so lyrically with the wintery white frozen surfaces below. The partnership between the resourceful Aisholpan and her trained eagle — an incredible specimen in its own right — is downright sweet in workman-like form.

The powerful message at stake in the film should not just be dismissed as simply a feel-good female empowerment spectacle even though this labeling is far from being considered derogatory. Bell musters up a solid and positive look at one young girl’s venture into womanhood by ironically tapping into the male ritual of eagle hunting en route to a revitalized self-discovery. This is definitely an important and intriguing story for children to duplicate, respect and learn from. Kids, however, are not the only audience that can benefit from Aisholpan’s perseverance for excellence in the male-dominated game of hunting. There are plenty of adults that should take a cue from this pint-sized, mountaintop over-achiever.

Sure, there are a few extraordinary girl-inspired entries that can compare to the telling triumph highlighted in the heartwarming The Eagle Huntress. Namely, Niki Caro’s 2002 New Zealand-based drama “Whale Rider” comes to mind. Hopefully though, viewers will hunt for this particular eagle that spreads its adventurous wings for all young girls (and even boys for that matter) who wish to embark on a difficult path to potential greatness. Hey, it certainly worked for the resilient huntress, Aisholpan Nurgaiv. 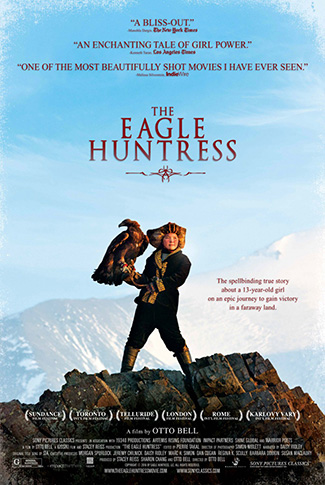