Congratulations Christopher McQuarrie. Brian De Palma, John Woo, J.J. Abrams and Brad Bird each had their shot, but with Mission: Impossible – Rogue Nation you are officially the director of the best installment in the “Mission: Impossible” series to date. That’s not so say number five is without imperfections (it still has its share of flaky, over-the-top cheesiness sprinkled throughout), but it plays out fresher and connects better than its predecessors.

It’s also clear his familiarity with Tom Cruise (they worked together in one capacity or another on “Edge of Tomorrow,” “Jack Reacher” and “Valkyrie”) is an asset and McQuarrie gets right to work showing this by delivering a money shot right at the beginning in the shape of Ethan Hunt (Cruise, “Oblivion”) hanging off the outside of a plane during take-off. McQuarrie leaves no doubt it’s his star doing the stunt and that we’re in for a crazy ride by drawing the camera in for a close-up on Cruise’s face looking, for all intents and purposes, as if he is genuinely taking the full g-force impact of a plane ascension.

Hunt’s reason for his death defying leap is nothing compared to what he and his IMF team soon find themselves up against. The Syndicate, as they’re known — a criminal organization of rogue agents and trained killers — are intent on eliminating the IMF leaving the path clear for their world unsettling plots. Clouding Hunt’s ability to react to the threat is CIA director Alan Hunley (Alec Baldwin, “Still Alice”) who is working the political channels to have the IMF disbanded (again). With friend being foe, foe being friend and any combination thereof, Hunt has no choice but to take the team off grid in order to complete one last impossible mission — should they choose to accept it . . .

Cue country hopping — Morocco, Austria, England, United States — as Hunt searches out The Syndicate who he is convinced is planning to assassinate the Austrian Prime Minister. There are plenty of sequences to keep the audience gripped to their seats as Hunt, with the returning help of Benji Dunn (Simon Pegg, “The World’s End”), Luther Stickell (Ving Rhames, “Piranha 3DD”) and William Brandt (Jeremy Renner, “Avengers: Age of Ultron”), get into explosive shootouts, car/motorcycle chases and whirlpools.

There is also the gorgeous Ilsa Faust (Rebecca Ferguson, “Hercules”) to thank for getting Ethan out of many Syndicate-related scrapes during the hunt. Ilsa is a mysterious femme fatale figure who is more than a match for him; she can break people’s necks with her thighs and has no problems doing so. Ethan has some tricks of his own up his sleeve though, a most impressive one (other than hanging onto a plane 5000 feet in the sky or holding his breath for an inordinate amount of time) is his being able to shimmy upside down up a pole he’s hand-cuffed to, in order to escape (you have to see it to appreciate it).

McQuarrie, however, also understands that in order for an action scene to work it doesn’t have to be played out at top speed. One such sequence takes place at the opera and it unfolds slowly enough to leave the audience waiting on tenterhooks while the tension builds to a crescendo. And he’s certainly not afraid to throw some humor into the mix as this same scene highlights the size difference between Ethan and a giant thug from The Syndicate and in others Benji delivers all the well-timed comic relief Mission: Impossible – Rogue Nation needs.

There is little allowance for complacency though. Time after time McQuarrie (who is also credited with writing the screenplay) toys with emotions taking Ethan too close to death for comfort and, although we know he will most certainly survive, it’s not always through his own doing. Ethan Hunt, unlike say John McClane (as per his last outing in “A Good Day to Die Hard”), is not superhuman after all. His “realism” is carried over from “Mission: Impossible – Ghost Protocol” and expanded upon even though other aspects of the film have gone the way of “far-fetched.”

But overall, that’s okay. McQuarrie has found and tapped into the right mixture of providing plenty of smart espionage twists, maguffins and dead-ends to accompany the ridiculously dizzying action of Mission: Impossible – Rogue Nation. And with Tom Cruise refusing to put the brakes on the abuse his 53 year-old body can go through, this happy medium can surely be used for the next IMF adventure in which they are once again disbanded by the government and ruthlessly hunted. 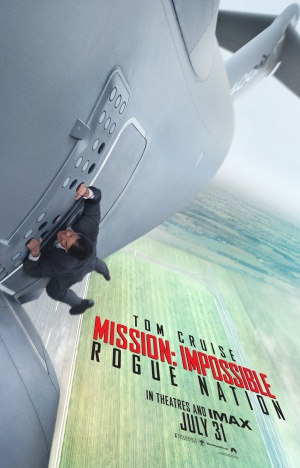