The Church of Scientology must’ve numbed Tom Cruise to fear (or common sense) — it’s the only explanation for the stunts he does in Mission: Impossible – Ghost Protocol — because the actor dangles 100 stories in the air outside Dubai’s Burj Khalifa, the world’s tallest skyscraper. And although it’s awfully hard to believe he agreed to be holstered up that high (regardless of the use of any nets, harnesses or wires), one can’t deny Cruise’s magnetic screen presence. So whether or not you’re a fan of his various media appearances (or simply a bystander who can’t forget his infamous “couch-jumping incident”) you can prepare to be charmed, and in my case, feel emasculated by his Ethan Hunt’s “no problem” approach to facing down global terrorism.

Shot in IMAX format, the production benefits from excess, with brilliant photography and top-notch special effects being exaggerated by massive wall-to-wall screens and booming surround sound. Like the plot, it’s all about shock-and-awe.

Helmed by Brad Bird, Mission: Impossible – Ghost Protocol, the fourth installment to the blockbuster series, marks the director’s live-action debut after overseeing acclaimed Pixar animations like “Ratatouille” and “The Incredibles.” Penned by Josh Appelbaum and André Nemec, it follows Hunt (Cruise), Jane (the foxy Paula Patton), Benji (Simon Pegg), and Brant (Jeremy Renner), a ragtag troupe of disavowed IMF (Impossible Missions Force) agents forced to go rogue after being implicated in the bombing the Kremlin during an operation. With limited supplies and no backup, their mission is to clear the organization’s name and capture Hendricks (Michael Nyqvist), an extremist armed with Russian nuclear launch codes, whose goal is to cleanse the world via total destruction, believing that it would lead to peace. Yet, to the rest of us, the only outcome is another World War, and thankfully, the orphaned team has our back.

Those unfamiliar with the franchise, fret not. Aside from an occasional tongue-in-cheek reference, the film is totally accessible, and it boils down to the fact that punches, gunshots, and wild car chases are fun in every context. Though, with all of the goofy tech (e.g., remote controlled magnets, information portals disguised as pay phones and, my personal favorite, gloves that cling to hard surfaces — allowing the wearer to scale buildings like a fly on a wall), don’t expect much realism.

The script caters to that playfulness. With a slew of larger-than-life characters and situations, Mission: Impossible – Ghost Protocol quickly establishes itself as popcorn entertainment. Benji is one of the standouts and chickenhearted audiences should find his paranoia relatable (. . . I know I did): Huffing and puffing over the simplest tasks, he’s the guy with the computer and, for the most part, he’s content with that. His wisecracks keep the movie from taking itself too seriously. But, one problem with the screenplay is how the writers approach Hendricks; despite a great performance by Nyqvist, there’s no forgiving the character’s stock antagonism. Rounding out the supporting cast, Renner plays an analyst with one of those dark secrets which threaten our opinion of the protagonist — in this case, Hunt. Unfortunately, it all leads down to an amazingly corny conclusion. And it isn’t cheesy the way action films normally are, in fact the schlock is more akin to a romantic comedy.

Nevertheless, while there are more effective ways of spending millions of dollars, none are as entertaining or awe-inspiring as blowing up a Russian national icon or choreographing a large-scale fight scene inside a maximum security prison. 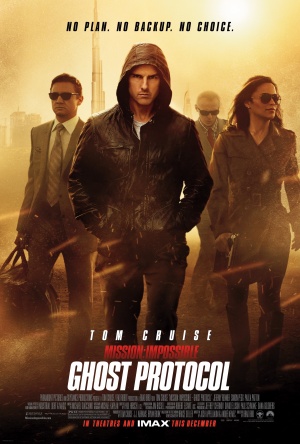