There is no doubt about the forces at hand when combining the potent artistry of Oscar-winning filmmaker Barry Jenkins’ (“Moonlight”) relentless creative cinematic vision and the social messaging of the late great James Baldwin’s raw, elegantly written work. Thankfully, the result is the soulful and artfully penetrating drama If Beale Street Could Talk . . . a refreshingly stark and candid observation about the compelling anatomy of strong black love, commitment, sacrifice, and impenetrable faith. Jenkins spins a poignant and captivating tale of the realities of racial inequity and cynicism embedded within an unconventional love story that is not always insightfully conveyed.

It is 1970’s Harlem where we are introduced to Beale Street’s young, attractive teen couple Tish Rivers (wonderfully played by newcomer Kiki Layne) and Alonzo “Fonny” Hunt (Stephan James, “Race”). Tish and Fonny have lovingly been devoted to one another since childhood — their love is deep, rich, and authentic. It will be trying times for the passionate pair as they are now faced by the upcoming responsibilities of parenthood, which is a treasured experience although one shrouded in uncertainty and anxiety. However, Tish and Fonny have each other and that is all that matters in the scheme of things.

Unfortunately, the engaging couple’s bright co-existence is abruptly tested when an ugliness of reality hits home for the both of them. Sadly, the expecting Tish has to go through the psychological ordeal of witnessing Fonny get falsely set up for a trumped-up rape charge courtesy of a despicable racist cop Bell (Ed Skrein, “Deadpool”). Now faced with this detestable dilemma, Tish has to muster enough strength and demonstrate vigilance in trying to free the unjustly incarcerated Fonny from behind bars.

Interestingly, Jenkins orchestrates a familial communion to show the undying support for the beleaguered couple. Headed up by Tish’s incredibly concerned parents (Regina King, “Miss Congeniality 2: Armed and Fabulous” and Colman Domingo, “The Birth of a Nation”), the family unit comes together in order to make sense out of the travesty bestowed upon the disillusioned Fonny. The consensus is clear: They must find a way to help the imprisoned Fonny beat the bad rap born out of racial contempt and ignorance.

The natural inclination is that the exposed psyche of Fonny and Tish is forever tarnished by the corruptible wave of unfathomable human indifference and indignity. Still, the glimmer of optimism breaks through due to the durable affection and emotion that these young adults maintain for each other. As sickening and reckless as it was for the systematic racism to claim the freedom of a young black man (or impacted black families for that matter), Jenkins dutifully reminds the audience that overcoming such blatant disregard can be remedied in dignity, determination, and measured defiance. Hence, there is not a shred of a defeatist attitude as Jenkins (and his on-screen creations) tackle the transgressions with an equal balance of anguish and encouragement.

With If Beale Street Could Talk, Jenkins once again infuses his distinctive storytelling with standout, complex performances and exquisitely shot scenes, matching the intensity and tenderness of Baldwin’s coveted literary convictions. Penetrating and piercingly heartfelt, the film dutifully echoes the cinematic resonance that Jenkins pronounces so resourcefully. As the conflicted couple at the centerpiece of this laudable love story, Layne and James are perceptively tortured as the persecuted pair facing life lesson-related desolation. In particular, Emmy-winning actress King is utterly compelling as the outspoken Sharon Rivers — the headstrong African-American mother who unconditionally has her distraught daughter’s emotional back. King’s explosive turn is worthy of Oscar consideration without question.

Poetically affecting and eerily as relevant today as the 70s, If Beale Street Could Talk is a must see. 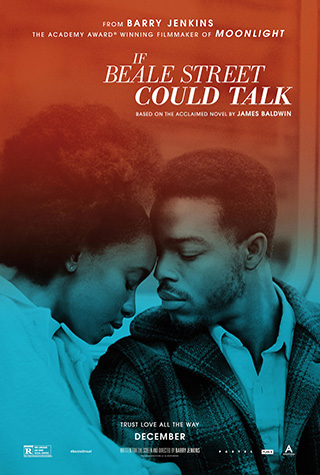