With the mildly surprising success of “Miss Congeniality,” Hollywood and Sandra Bullock figured why not pump out a sequel and hope for similar results. What do they get? Miss Congeniality 2: Armed and Fabulous. A mildly entertaining movie (of course).

Ms. Bullock reprises her role as FBI agent Gracie Hart. The dressed down, seemly stupid woman, who in reality is a hot, smart, tough broad (yes, Sandra Bullock IS hot). For this sequel, the producers bring as much of the first cast back as possible and ask Regina King to take the place of Benjamin Bratts’ reluctant partner.

Basically, the movie works. Gracie continues with her half-witted schemes that work and the feuding chemistry between her and Sam Fuller (Regina’s role) is fun to watch (even if it is a bit over-the-top). However, Diedrich Bader (Oswald, from “The Drew Carey Show” fame) steals the show. He plays an outrageous gay guy, who is assigned to oversee the hair and wardrobe of Gracie, who is now the FBI spokeswoman. Every scene he is in, I found myself laughing. Want a funny movie? All you have to do is write in an overly homosexual character. Even die-hard homophobes will shit themselves from laughing so hard!

My only real drawback of Miss Congeniality 2: Armed and Fabulous is Bullock doesn’t show any skin. Doesn’t wear any tight fitting dresses or bikinis either. Surely they could have found an excuse to get her into something even semi-revealing. Overall though, I’d recommend seeing Miss Congeniality 2: Armed and Fabulous if you enjoyed the first movie or need a way to spend two hours of your life and $15. Hell, just to watch Diedrich Bader act like an imbecile is worth the price of the ticket! 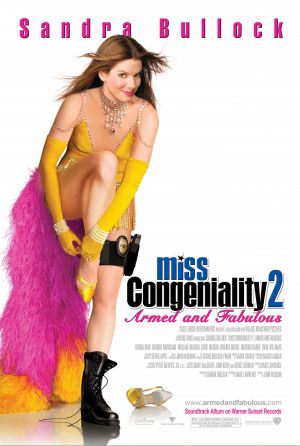