I went into this movie knowing full well D.E.B.S. was going to be at best a close second to that shitfest “Elektra.” But, I had to take a chance on chicks with short skirts, thigh highs, and the chance of lesbian make-out scenes. I’m a man, damnit!

However low my expectations were, I was still disappointed! D.E.B.S., I can honestly say is a worse film (can I call it that?) than “Elektra.” Let me say it again . . . this film sucked ass 50x worse than “Elektra.” No amount of lesbian kissing (I think there were two tiny make-out scenes) or gratuitous scenes of cute girls running around in catholic school girl outfits could save this movie. OK I lied . . . maybe a few more lesbian scenes could have made the movie better . . .

I can only wonder what the producers of this movie were thinking. They certainly could have tried to cast hotter girls in the movie since it was clear they weren’t even remotely interested in acting ability. Sara Foster (see “The Big Bounce”) and Jordana Brewster (see “The Fast and the Furious”) are the only girls to watch (and luckily they’re the two who kiss twice). Devon Aoki plays a horrible French broad who actually looks like a frog. Amazing typecasting! Worthless fucking frogs. She played a better Miho (see “Sin City“) . . . a black and white movie in which she doesn’t talk! The other two girls are unremarkable. I’ve already forgotten who they are.

And holy shit, James Spader alert! Some douchebag actor playing some worthless role (Scud or some shit like that) has decided to take on Spader’s mannerisms from that boring television show “Boston Legal.” Someone please tell this kid that people should not ever try and purposely put on a performance like that.

And while I’m at it, what the fuck happened to Michael Clarke Duncan? I like that guy, but what gives? Didn’t he win an Academy Award for his portrayal of John Coffey in “The Green Mile?” It’s been a slow steady drop for this guy, but how desperate do you have to be to take on a role that is clearly beneath him. Hey Michael, I’ll loan you a few bucks if it’s that bad!

Anyways, like I said, I walked into D.E.B.S. knowing it was pure drivel. What I didn’t count on was the magnitude of feces that was dropped on my head and mashed in for a little something extra. I can actually say I hate myself for watching this movie. I hate that my libido drove me to watch this movie. Thanks a whole fucking lot, Hollywood.

Next time I get a stupid fucking idea like this again (and trust me, there will be a next time), I want someone to shoot me in the head with a staple gun. Save me from myself! 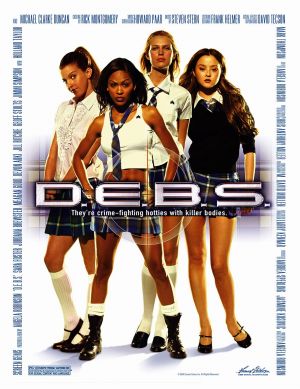