Over two decades ago, the British film scene was drastically up-rooted and challenged by the likes of an ambitious, dangerously addictive film centered on a closely knit group of Scottish junkies. That, and dead head-twisting babies crawling on ceilings. Danny Boyle’s on-screen adaptation of Irvine Welsh’s “Trainspotting” was a definite first in venturing into explicit content of intravenous drug use, sex and violence with a new-wave soundtrack and trippy, hallucinating visuals that became a part of Boyle’s auteur signature style.

Scotland in the Nineties seemed a rather suitable setting for Renton, Sick Boy and Spud’s hedonistic lifestyle. A cultural justification almost, with youth culture rejecting and mocking anti-drug campaigns against the backdrop of a newly born era of raves and recreational drug use. But now in 2017 — a solid twenty years after the events of the iconic black comedy — Boyle, with T2 Trainspotting, beautifully matures his Nineties classic by revisiting Edinburgh’s finest addicts, who are now in their mid-forties, enduring the aftermath of their heroin addled youth.

For Sick Boy (Jonny Lee Miller, “Dark Shadows”), who now simply goes by Simon, and Spud (Ewen Bremner, “Snowpiercer”), not much has changed since the betrayal that occurred over twenty years ago that saw a psychotic Begbie (Robert Carlyle, “28 Weeks Later”) arrested and taken to prison. With suburban disdain and crippling addiction still prevalent for a fragile Spud, the empathetic addict faces his darkest moments in an attempt for reconciliation from his past that still haunts his present life. Simon is forever chasing the perfect scheme. While blackmailing and prostitution ring sub-plots add an underground crime aspect to the film, it sees the bleached blonde pimp stuck in a cycle of failed attempts and a newfound dependency on cocaine.

Fellow abuser, Mark Renton (Ewan McGregor, “Jack The Giant Slayer”), however, appears to have ironically chosen life after a stint living in Amsterdam has seemingly morphed him into the idealistic average man he taunted in the now famous “Choose life” monologue. He chose a job. He chose a wife, a family, a mortgage. He chose everything he set out for twenty years ago after robbing “his so-called mates.” Renton’s sudden return to his home town ignites buried feelings of betrayal that have sitting right at the surface for an incarcerated Begbie. What ensues is a titillating and suspenseful man hunt, with a twenty-year-old target on Renton’s head.

Overall, T2 Trainspotting may simply be viewed as one big nostalgia trip. The line a “tourist in your own youth” becomes cemented as a central motif. With all four characters being disconnected from each other, Boyle enlists numerous flashbacks along with sensory triggers of sound and landmarks to provide objective memory experiences that successfully transport the characters, along with the viewers, back to the Nineties. That’s what the film ultimately succeeds in — it does not let us, nor do the characters forget.

And no fan will be dissatisfied in the excess of nostalgic nods to those iconic moments that were immortalized on film all those years ago. The first few moments of T2 Trainspotting focus on the image of Renton’s physically transformed feet furiously pounding on a treadmill like he did on Princess Street in the original’s opening scene. Re-creating imagery of train platforms, filthy club toilets and being hit by cars whilst letting out a manic laugh ensures a pleasing homage to the past that will leave a comforting feeling of being reunited with old mates.

What this desire to maintain a feeling of the past reiterates is how the sequel heavily relies on its predecessor. It’s rare to come across a sequel as loyal and devoted to its original. However, this does allow some pitfalls. In terms of style and cinematography, it was though as if some moments where lettering splashed in neon color across the screen, or the excessive use of split screens came off as grasping for a simulation of past aesthetics that unfortunately didn’t have the same effect.

Despite this, T2 Trainspotting doesn’t compromise Boyle’s signature style. Frames are washed with vibrant neon lights, freeze frames, and jump cuts to form an eclectic screen space. A visually stunning piece isn’t without its complimenting soundtrack, either. The new-wave nature of “Trainspotting” featured a techno-pop engulfed soundtrack. With subtle samples of Underworld’s “Born Slippy” acting as Renton’s theme for reminiscing about old times, Boyle reminds us, however, that we are now in modern times by featuring modern tracks from the likes of Wolf Alice and Young Fathers.

There are some images that will forever remain iconic. Spud, Renton and Sick Boy revealed to be standing on a train platform in the Scottish highlands will always be one of them. T2 Trainspotting remains true to that legacy Boyle created in the mid Nineties, giving Gen Xers the satisfaction of reliving their youth. 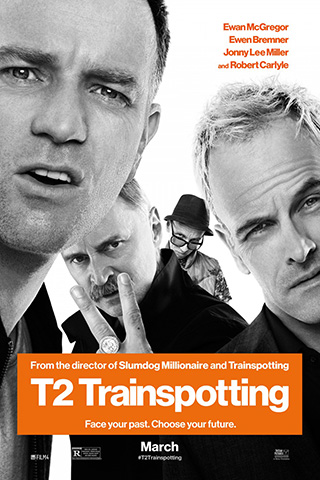