When anyone watches a movie, they enter into a non-verbal contract with the director that states that as we place ourselves in their hands for the next two hours; we trust that they will not screw with us. That does not just cover that they won’t plant us back in the Middle Ages and then have someone make a phone call on an Iphone but also that they know what they are doing and will not film someone’s chin when they intend to be capturing a close up. If they do film a chin, that chin better be important in the third act. Director Sol Tryon in his debut film The Living Wake, breaks this contract.

The Living Wake covers the last day of self proclaimed genius K. Roth Binew (played by Michael O’Connell, also co-writer of the screenplay). He is diagnosed with a “vague and grave sickness.” On the plus side, the doctor is able to pinpoint to the second the moment Binew is going to die. Therefore, K. Roth sets out on his last day to pass out invitations to his final party, a living wake. He enlists his best and only friend, Mills Joaquin (Jesse Eisenberg) to take him around on a bike-powered rickshaw. The quirkiness only escalates from there. In an attempt to finally get the brief but powerful monologue his dad promised him, a monologue that would uncover all of life’s mysteries, he endures trials and tribulations, mostly of his own making. He concludes his day with a final performance at his living wake. On a makeshift stage, in an open field, Binew’s friends gather to witness his madness one last time.

Jesse Eisenberg, still doing his best Michael Cera impersonation (God bless him), does an adequate job being a dutiful and long suffering lackey. He is the reason this film is getting a release at all, as he is the only known name in the entire roster, and I guess they figured they could release the film on his recent success in “Zombieland” and “Adventureland.” Carter Little wrote the music, which was often overpowering, (Michael O’Connell has his hand in this as well), although I did enjoy their attempt at wit by placing the Westminister chimes throughout the score as if to show how time is slipping away from K. Roth Binew. Ha ha! So witty.

There are places in the film where the actors physically pause for the laughter as if they are playing before a live studio audience . . . but the laughter in my audience never came. It is very difficult to express why and/or how this film misses the mark and I think the difficulty in the explanation is part of the mark-missing in itself. Let me explain. The Living Wake wants to be over the top, both with its characters and their audacity, and with the settings and situations they are placed in. However, it feels that Tryon is too timid and decides to play it safe. It’s not quite tongue-in-cheek and it’s not quite convincing to me that these are real characters. The movie lies in some middle lukewarm ground where everything is simple and boring. There is a song that K. Roth Binew sings, his final hurrah as it were where he shucks off this mortal coil and says goodbye to his acquaintances. The event itself is big. The character, to Mr. O’Connell’s great credit, is played very big. The song, however, felt understated, underdeveloped and underwhelming.

Perhaps in a different director’s hands this would have been a cult house classic — certainly something I would enjoy. In fact, I feel this film is begging for an immediate remake. I would love to see this story with most of this cast in a capable director’s hands. Tryon seemed to have been watching “Rushmore” on an endless loop while making this film and I can see what he was going for. Honestly, he just lacked the confidence to be brazen, to really let K. Roth Binew loose, to let him be an utterly contemptible jerk and, perhaps, to be hated by the audience. That’s where he was written to be. That’s where O’Connell was playing him. Instead, Tryon pulled way back on the reins, too scared that his protagonist was not going to be adored and therefore landed in the queasy no-man’s land of apathy.

The gravest sin, and the one that finally pushed me completely out of the fanciful world this film was attempting to weave around me, came at the end of the film. I would say that this is a spoiler because there is a tissue-thin veil of doubt the film tries to throw over our eyes about the finality of K. Roth Binew’s life at the end of the day. And perhaps it is because of that shred of doubt that I was in such a quandary about what happened. In any case, if you care at all, don’t read further and know that I would recommend waiting until the re-imagining to watch The Living Wake.

Shocker, I know, but he times it very well with the ending of that final “big hurrah” song I was describing earlier and lands in his coffin, standing up, arms folded across his chest (if only he could have been holding a lily). The problem is, Michael O’ Connell CAN NOT STOP MOVING! And it’s not a subtle, “Did I just see what I think I saw?” kind of thing. This was serious hand twitching, chest heaving, Adams apple moving going on here. It was to such a point that, when none of the mourners who were staring intently at him even mention it, I felt that they were either in some serious denial or that they had all gone mad. “Binew is going to get up at any minute now,” I thought to myself. Then they nailed shut the coffin and Mills Joaquin takes him away. “He’s taking Binew to a secluded place where he can open the coffin,” I thought to myself. Then Mills Joaquin places the coffin on a boat in a river and sets it ablaze. “Oh, so Mills Joaquin wasn’t in on the gag and K. Roth Binew will soon burst out of the flaming coffin and it will be funny,” I then thought to myself. Then the screen went black and the end credits started to roll. Then I finally realized that it was not the audience at the living wake who could or would not see the dead man moving, it was the director. And it was then that I decided that if the director, Sol Tryon, could not be bothered to care about his film, then neither could I.

Marco wrote, directed and produced the feature film Within. He has lived in the Los Angeles area his whole life. Top 10 Favorite Movies: Fight Club, The Fountain, Eternal Sunshine of the Spotless Mind, Oldboy, Pulp Fiction, Children of Men, City of God, Ferris Bueller's Day Off, The Shawshank Redemption and Memento. Top 5 Favorite Directors: Spike Jonze, Darren Aronofsky, Alfonso Cuaron, Quentin Tarantino and Billy Wilder. Top 3 Favorite Film Composers: Clint Mansell, John Williams and Howard Shore. You can follow his 140 character movie reviews on Twitter Or friend him on Facebook Or watch some short films of his on YouTube 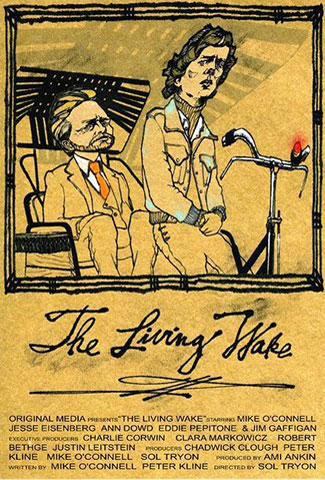