The Incredible Story of the Stone Boy (“La increíble historia del Niño de Piedra”) is an animated film that begins with our main character, a young girl named Marina, nonchalantly talking to a cloud.

Yes, you read that right. A cloud. With a face.

This cloud then gives Marina (voice of Melissa Gedeón) a ride (with her parents’ permission, of course) to the local fair to meet with her cousins. Together, they begin looking for the plot — I mean, uh . . . they begin looking for an “adventure.” It’s then that they run into a strange Italian man who reveals our titular character, a boy covered in stone because he got angry . . . or something. It doesn’t make a whole lot of sense, but with the help of a fairy Marina just happens to be BFFs with, the children are quickly whisked away by the aforementioned cloud on a magical journey to the Land of Senses, where hopefully, they’ll be able to restore the boy to his former human self.

I’m going to be honest. I cannot find much information about The Incredible Story of the Stone Boy besides a few trailers on YouTube. It’s evident it hails from a Spanish-speaking country (likely Mexico), as there is plenty of visual text indicating as much. The sound design is overall pretty awkward. Being an animated film, there is a good chunk of questionable voice-dubbing decisions, which honestly should be expected from a film like this. At best, they end up as slight distractions, but at worst, they’re actually kind of amusing, such as when Marina, who is probably less than 10-years old, somehow develops the singing voice of an adult. Characters’ dialog tends to overlap at weird moments and at times it isn’t synchronized properly, but the movie remains watchable. I’ve seen sound work done much worse.

The most striking aspect of The Incredible Story of the Stone Boy is its colorful visual design. The art style itself is rather simplistic, looking like a slightly more expensive Flash animation most of the time, but there are characters the children encounter that range from adorable Mogwai-like ear creatures to bizarre anthropomorphic noses, and I honestly spent the movie curious what new creature was going to show up next.

That being said, there is nothing memorable about any of the primary characters. The stone boy himself is given no development whatsoever besides what caused him to turn into stone. I’m struggling to remember the characters’ names as I write this, but the movie doesn’t spend much time seriously developing them. While there are a few songs in the movie, they all sound too similar to stand out from one another. The interesting visuals are really what guide the movie more than anything.

The Incredible Story of the Stone Boy is an easy target for criticism most of the time, but I’d be lying if I didn’t have some modicum of appreciation for humble filmmaking efforts such as this, even if in this case, it’s relatively slight. I hate to pick apart a movie this simplistic, but there are definitely better options out there. It is very obvious this was intended for the youngest of children (I would say strictly preschool). It teaches lessons about working together and helping others, but with the depth and complexity of a Nick Jr. show. It’s rather short (71 minutes) and has enough variety to keep the attention of young ones, so I wouldn’t recommend it to anyone outside that window. I enjoyed watching most of the visuals, but I can’t imagine adults taking anything else away from this one.

Unless, of course, you’re just THAT curious about it.

'Movie Review: The Incredible Story of the Stone Boy (2015)' has no comments 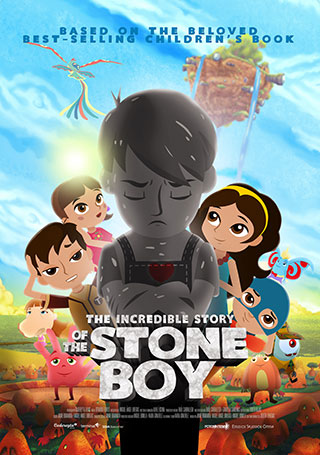 The Incredible Story of the Stone Boy (2015)