In the opening minutes of The Kill Team, we see brief glimpses of optimism, national pride, and infantry brotherhood from our titular platoon of soldiers — all of which ends up shattered well before the ten-minute mark as the horrors of wartime and their effect on those involved make themselves abruptly known.

Nat Wolff (“Home Again”) plays Andrew Briggman, who begins the movie fantasizing and romanticizing his own enlistment, having imaginary firefights in his bedroom days before his own deployment. He forms a quick camaraderie with his platoon as they are sent out to build relationships with the Afghani civilians. Their peaceful occupancy is uprooted when Sergeant Deeks (Alexander Skarsgård, “Long Shot”) enters the picture. Hosting friendly cookouts one minute and begetting violence the next, Deeks imposes a manipulation over the group that doesn’t just put them at odds with the native civilians, but with each other as well.

Having previously examined the real-life events in detail with a 2014 documentary of the same name, Oscar-nominated documentarian Dan Krauss dips his toes into narrative filmmaking, recounting the events of the situation his documentary centers on, albeit with the names of the subjects changed. While the true emotion only attainable from a documentary is absent, this new look at the events serves as a great companion piece, given the narrative here is almost entirely located on Afghan soil and the documentary deals with the following court proceedings.

Much like “Jarhead” before it, The Kill Team is a war film that’s surprisingly light on combat, but deeply engrossed in its characters. The tension remains contained and mostly internal on Briggman’s end, mostly built from his slow discovery of his Seargant’s ulterior motives.

With a structure like this, it really comes down on the central performances to carry the weight of the movie, and thankfully Wolff and Skarsgård do not disappoint. Wolff plays Briggman very convincingly as a confident military youth, eager to please his superiors but also determined to right the wrongs he sees committed in front of him. It’s a tricky line, but save for a brief crying scene that doesn’t quite land as hard as it should, Wolff straddles it expertly.

Meanwhile, Skarsgård continues what appears to be a recent, relentless streak of scene-stealing roles. A chameleon in his own right, Skarsgård capitalizes on a sociopathic approach to frame Deeks as an informed, hardened commander, effortlessly flipping between a stern-yet-approachable demeanor to that of a disturbingly unflappable psychopath. His dominance over the platoon is all the more legitimized and reinforced by his proof of experience, including tattoos symbolizing his kills and a collection of disembodied fingers.

While Briggman eventually sees Deeks as the threat he is, it isn’t so obvious to the rest of the platoon who, sometimes gleefully, follow in his dangerous footsteps, resulting in the senseless killings of multiple unarmed Afghani civilians. Finding no help from the country he’s pledged loyalty to, the stakes get higher as Briggman attempts to not only find a way to escape the situation, but to also escape the ever-growing suspicion from his fellow platoon brothers that something is amiss with him. The tension builds to a climax that certainly falls into the film’s bleakest territory, yet could’ve cemented the horror of the situation even further if it wanted to. Being the concise filmmaker he is, Krauss opts to end his story in a very specific place, containing its message and differentiating it from the documentary.

The Kill Team could’ve benefited from a pinch more filmmaking nuance — it’s a pretty straightforward recounting. But in most every other way, it’s an unflinching, heartbreaking look at the tragic events of the Maywand District Murders and the dehumanizing perspectives war brings out on every side, worth a watch for its lead performances alone. 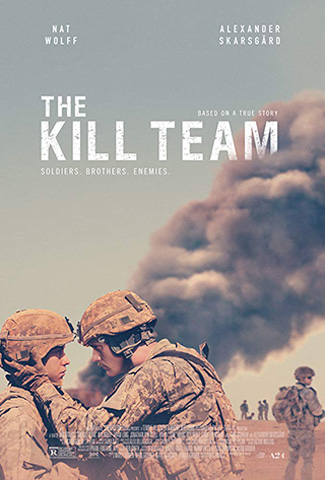