The first of two John DeLorean-focused films to be released in 2019 (the other being a documentary/re-enactment hybrid “Framing John DeLorean”), Driven does not adopt the typical biopic template. Rather, it positions itself almost as an eyewitness perspective to the entire scandal from the point of view of the FBI informer who ratted John DeLorean out. The result is a slight, yet somewhat entertaining comedic crime caper that certainly has the talent to back it up, even if the insanity of the true story never feels as fully captured.

It follows Jim Hoffman (an ultra-likable Jason Sudeikis, “Booksmart”), a drug smuggler who is forcibly brought in by the FBI to pin evidence on his former client Morgan (Michael Cudlitz, “Surrogates”). Along the way, however, Hoffman discovers his neighbor is the one and only John DeLorean (Lee Pace, “The Hobbit: The Battle of the Five Armies”), whose high ambitions and luxury lifestyle enrapture both Hoffman and his family, all of whom remain totally unaware of Hoffman’s troubled predicament.

Though Driven frames the story in a mostly atypical way, it mostly stays afloat on the backs of its cast, all of whom bring that little extra to the table. Sudeikis, as expected, is solid as the everyman with a sharp tongue and a winning smile. He is countered evenly by Pace’s DeLorean, who while not nearly smiling enough, holds an enigmatic balance between external showmanship and internal conflict. Corey Stoll (“First Man”) as the always frustrated, no-nonsense FBI agent closest to Hoffman shares the best scenes with Sudeikis, but Driven also deserves praise for giving the often unsung Judy Greer (“Ant-Man and the Wasp”) a quality supporting role that, if only by a little, applies both a modicum of depth and an agency to what could have been a rote, spectating wife role.

Then comes the actual meat of it all: The DeLorean car scandal. Bouncing back and forth between the climactic DeLorean trial and the events leading up to it, the film is paced very well and manages to avoid running on tired fumes for too long before introducing new and engaging story elements. At the same time, it does not stray very far from familiar formula, at times to its detriment. While the outcome is clear to anyone familiar with the real-life case, not enough is done to subvert by-the-numbers mechanics that would keep newcomers to the story invested. It’s in the third act especially where the composite storytelling (in addition to having DeLorean relegated to the sidelines in favor of Hoffman) begins to take a toll. You can’t help but feel that there’s a deeper, more tragic layer in these characters worth exploring. The film opts against this in favor of laughs, and while the comedy doesn’t always land — there’s an embarrassingly obvious BetaMax joke at one point — the novelty of its genre-crossing begins to wear thin, but not enough to distract or bore the casual viewer.

Driven, at its worst, is generic genre fluff. At its best, it’s a brisk, entertaining two hours. The characters, while archetypes, stand out and overshadow most of the movie’s shortcomings. There’s a solid character study at the heart of John DeLorean’s downfall that feels like it was meant to be made into a movie. Even so, as an ensemble piece, Driven still manages to surprise with what it has to offer. 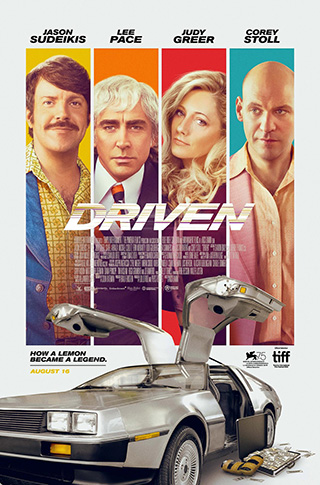