The horror genre allows many opportunities to explore opposition. The opposition may involve faith in “The Exorcist,” gender in “Rosemary’s Baby,” class in “The Texas Chainsaw Massacre” and sometimes all these and more, such as in “Drag Me To Hell.” With folk horror, the opposition is often between tradition and modernity, insiders and outsiders, new and old. Such is the case in William McGregor’s debut feature Gwen, an eerie, haunting and atmospheric folk horror set in 1855 Wales. Elen (Maxine Peake, “The Theory of Everything”) and her two daughters, Mari (Jodie Innes) and the eponymous Gwen (Eleanor Worthington-Cox, “Maleficent”), live an isolated existence in their Snowdonia family farm. Sheep and vegetables are their crop, and their contact with others is limited to market and church. The ripple effects of the Industrial Revolution are changing the society, with the neighboring farms having been bought for slate quarrying. Despite the efforts of industrialist Mr. Wynne (Mark Lewis Jones, “Child 44”), Elen refuses to sell the land, insisting that it is their home. But strange things continue to happen around the farm, prompting Gwen to question her mother’s state of mind and possibly even her sanity.

Any viewer familiar with the unholy trinity of folk horror — “Witchfinder General,” “The Blood on Satan’s Claw,” “The Wicker Man” — as well as more recent contributions like “The Witch,” “The Ritual” and “Midsommar,” is likely to recognize certain elements. The Snowdonia community is isolated with little contact with the outside world, the farm a significant journey from the nearest market. Traditions are followed with a strict fervor, and danger seems to swell from the very ground. A war — which Gwen’s father (Dyfrig Evans) left to fight in — is mentioned that indicates the wider world, but the insular community and entrapping landscape ensure a contained environment. Williams and director of photography Adam Etherington craft a chilling, but eerily beautiful, cinemascape. The landscape is as much a character as the humans, including the mountains and the quarries, the fields, glens and valleys where the drama takes place. Of particular note is a monolith that appears both in Gwen and Mari’s games, and Gwen’s dreams of happier times. Other dream sequences include a figure approaching through the omnipresent fog, obscured and seemingly engulfed by its surroundings.

Such engulfment is a recurring trope, as the film’s characters are often emphasized as tiny figures within the landscape, dwarfed and even overwhelmed by mountains, rock faces and encroaching fog. This fog is mirrored by the encroachment of modernity, manifested by the slate quarry that the family must pass through. In an early scene that takes place within the quarry, Gwen encounters a deceased family being brought out of their home. The quarry walls cast a gray pallor over the sequence, adding to the sense of foreboding. Dr Wren (Kobna Holdbrook-Smith, “Justice League”) diagnoses the cause of death as cholera, but uncertainty afflicts Gwen as well as the viewer.

Uncertainty and paranoia steadily increase, as the family farm is plagued by mysterious events. Superstition and Christianity intertwine and clash, animals die, Gwen’s dreams of family games turn to nightmares of death and monstrosity. Another common trope of folk horror is escalation, and the increasing horror of Gwen’s dreams reflects the increasing woes of the family. A supernatural influence is frequently suggested but not clarified, leaving the viewer to wonder whether the threat comes from within or without.

Much of this threat is conveyed by the compelling performances of the two central women. As Gwen, Eleanor Worthington-Cox is extraordinary, conveying the turmoil of adolescence and responsibility with the full gamut of expressive means. From quiet moments of introspection where her eyes speak volumes, to full-bodied screams of anguish and loss, Worthington-Cox wonderfully portrays a girl aged far beyond her years. As Elen, Maxine Peake matches the younger actor point for point, her flinty anger giving way to weary desperation, but with a resolve that never wavers. Supporting performances are also strong, especially Holdbrook-Smith as the figure of modern science and medicine, torn between professional duty and human compassion, as well as Innes as the virtually silent Mari. Mari is a largely passive observer in the drama that engulfs her family, yet her silence serves as a useful counterpoint to Gwen and Elen’s increasing hysteria. The moments between Mari and Gwen are some of the most touching in the film, the two sisters playing in a way that beautifully encapsulates their bond with each other as well as their environment.

As well as portraying the clash between agrarian tradition and industrial modernity, Gwen is also an intriguing foray into gender opposition. The figures of authority, most obviously Mr. Wynne and Dr. Wren, as well as Minister Bowen (Richard Elfyn, “Killer Elite”), are of course men, and the overtly absent father places the female protagonists of the film very much as victims of patriarchy. Mr. Wynne’s subtle, but cumulative, aggression manifests as dark figures fill the foreground of deep focus shots, Gwen captured as a tiny figure in the background. This visual composition adds to the chilling quality of the film, the expansive landscape acting as secure a prison as any number of stone cells. This is perhaps greatest strength to Gwen — a film acutely concerned with the outdoors that successfully creates in the viewer a sense of that outdoors. Coldness and isolation are the prevalent moods of the film, with little offered in terms of comfort and belonging. Come the end credits, the viewer will likely be left with a sense of profound bleakness over the prospects for individuals in the face of “progress,” and for women who offer a stand against the desires of men. 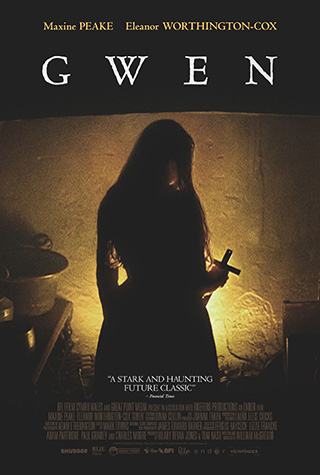