Those dastardly backwoods are calling again.

Based on the well-received 2011 novel by Adam Nevill, David Bruckner’s film, The Ritual, is a competent British-made horror which, after a so-so opening act, gradually mutates into something quite watchable and intense.

Luke was there when Robbie died. He hid while his friend was murdered. While his buddies simply grieve, Luke is also burdened by an overwhelming sense of responsibility. It’s a neat shortcut to empathy because we the audience know there was little he could have done. Spall, usually so energized, looks convincingly haunted in the role.

Up on the hillside, Dom does his knee in. Naturally, there’s no phone reception. So, the choice is made to cut through the woods to reach the lodge on the other side. In the woods, things go pear-shaped. A deer has been strung up and gutted; strange alien noises screech in the dark; there are curious markings on the trees; and tensions are tightening between the men.

The shift from creepy to catastrophic occurs when the boys find a shack and spend the night. What happens brings them all to the cusp of madness. Anger spills into accusation, and some raw feelings over Luke’s alleged cowardice surface. Moreover, they are being hunted by a nameless creature, whose pursuit is herding them toward an encounter with the locals. The locals simply love out-of-towners — even if their plans for them aren’t entirely wholesome.

The touchstones of The Ritual point toward the direction of the story: Hints of “The Hills Have Eyes” (1977) and, more recently, “Bone Tomahawk” — although Bruckner’s film lacks the nightmarish rawness of the former and the cinematic poise and poetic brutality of the latter. There are also parallels with Christopher Smith’s very fine medieval thriller, “Black Death,” in the way that the film takes an arresting shift in the final act.

It’s a pity that being stuck in the woods with these men is, for the most part, a chore. The performances are fine; excellent in the case of Spall, whose laid back naturalism provides an engaging counterpoint to the far-fetched excesses of the narrative. But the dialogue is excruciating at times, whether it’s the tiresome bro-banter (“How’s your knee?” / “How’s your mom?”) or the repeated, needless commentary on what the audience should be feeling (“Something’s not right here, lads!”). And the pace at which the group descends into disorganized chaos speaks not of character development but impatient writing.

The “oi-oi” dialogue never dovetails with the film’s craft: The drained palette; Andrew Shulkind’s (“The Vault”) still, handsome cinematography; Ben Lovett’s (“Black Rock”) brooding atmospheric score; Bruckner’s very admirable restraint. While these aspects connote some elemental horror at work, the characters busily reinforce outdated clichés: That men do not discuss feelings, won’t listen, are innately uncooperative, and endlessly compete. Dom gets the worst of the macho stereotyping — it’s no accident that the slowest gazelle also happens to be the one who shows the greatest deference to his wife.

The mood is too grim, and the build-up too slow-burning, to offer the knockabout fun of, say, “Dog Soldiers.” The only way is weird — and here’s where The Ritual redeems itself somewhat in the final act. While not fully throwing itself down the rotten rabbit hole of Ben Wheatley madhattery, once the threat is properly revealed, the film becomes an enjoyably unpredictable ghost train ride, with some effective jump scares.

Because it’s not in their heads — there really is a monster in the woods, and it’s a fantastic monstrosity, convincingly rendered in both CG and puppet forms. On top of this are Luke’s increasing hallucinations, which see the stark fluorescent lighting of the murder scene cut incongruously through the gloom of the forest. These sequences are skillfully implemented through clever editing and sleight of hand.

In the end, The Ritual does enough to shake off its formulaic structure and its banal script. Caught between its lowest-common-denominator characterization and something deeper, darker and more existential, it never fully coheres; never fully satisfies. But it is still a well-made, well-acted, solid horror; one which dares to go places, and which deserves a place on your Netflix watchlist. 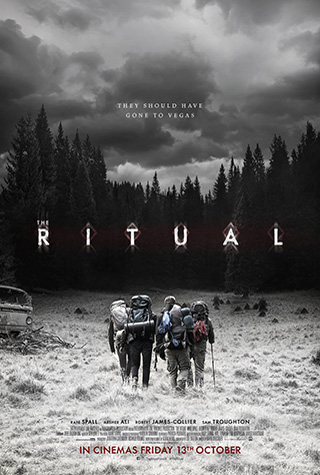