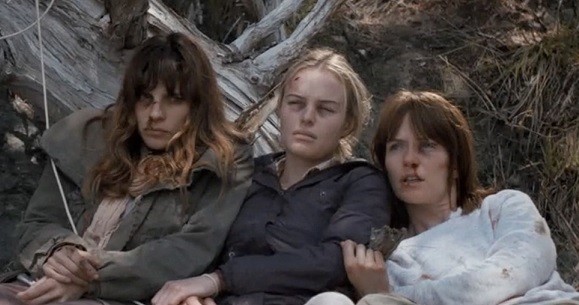 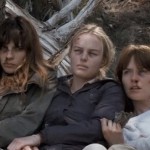 Katie Aselton dreamt up the premise, directs and stars in the new film Black Rock which chronicles a weekend in which three estranged life-long friends reunite for a camping trip on their old childhood haunt Black Rock Island. But what is supposed to be an escape to rebuild bridges between friends — Lou (Lake Bell) is feuding with Abby (Katie Aselton) over a sexual indiscretion and Sarah (Kate Bosworth) is stuck playing mediator — turns into a fight for survival.

Unfortunately, before the girls can get full on into a “Goonies” style treasure hunt to find an old time capsule supposedly buried on the isle (one of several activities planned by Sarah), the trio run into Henry (Will Bouvier), Derek (Jay Paulson), and Alex (Anslem Richardson); three ex-military men who are on the island for a hunting trip. Despite being married, Abby shows interest in Henry and they end up in a make-out session in the woods that Henry takes too far. Soon after Abby fights off her would-be suitor, the girls find themselves the new hunting targets of the well-armed men with a whole lot of PTSD anger to go with their bullets.

With Black Rock, real life partners Aselton and Mark Duplass have collaborated well as a writing team to develop a deep and convincing history between the three female protagonists. Their personalities are well developed and the dialogue shared between them — during both the light-hearted and horrific times — is believable. It’s made all the better as it is combined with actresses who have the chops to drive the narrative — so much so that as an audience member it felt like we’re a part of the proceedings as opposed to watching a performance.

The male cast, however, does not fare nearly so well, in particular Paulson as Derek. His characterization is woefully over-the-top and his boisterous performance is made all the more obvious by the comparatively opposite natural performances of the female cast (and to a lesser extent his male co-stars). He crushes any potential for atmosphere with his rants and is completely unbelievable. 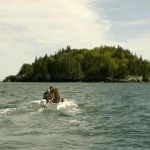 En route to an adventure.

With them the movie does, albeit not as profoundly as I would have liked, touch on the interesting subject of soldiers and their reintegration (or lack thereof) into society. These men are broken goods suffering from PTSD and a healthy dose of anger but it’s never expanded upon enough to help the audience understand them. It’s simply used as a way to explain their actions. (Maybe it can also explain how these guys get schooled by three untrained females too).

As a woman, it was nonetheless refreshing to see the roles reversed. Girls using the stereotypical male aggressor’s tools against him is an empowering feeling. And as the situation gets direr as the movie rolls into its third act, it was also good to see the three very pretty ladies transform into dirtied, calculating survivalists even if the scenarios they found themselves in were increasingly fantastic.

With Black Rock a concerted effort was made to reclaim the horror-thriller from the paranormal throes it’s been stuck in and reground it back to the good old days of movies like “Deliverance,” “Cape Fear” and “I Spit on Your Grave.” It is a damn good idea, but in this particular instance, it’s one that falls short of expectations. 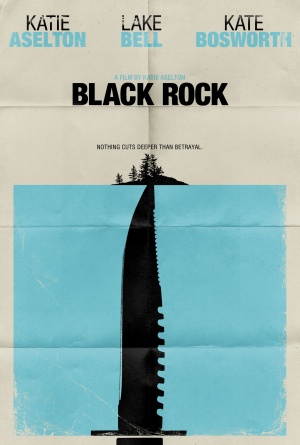