When everything in your life is looking rosy, there is always someone who will tell you that your happiness is on shaky ground. Though most of the time these naysayers will not profit from your misfortune, such is not the case in The Big Short, Adam McKay’s (“Anchorman 2: The Legend Continues”) hard-hitting comedy/drama about the collapse of the housing market in 2008. Based on the 2010 book The Big Short: Inside the Doomsday Machine by Michael Lewis with a screenplay by McKay and Charles Randolph (“Love and Other Drugs”), the film centers on a group of Wall Street functionaries who, despite the industry, government, and media telling them otherwise, discover that the market for bonds based on subprime mortgages is on shaky grounds and is doomed to collapse.

Supported by an outstanding ensemble cast that includes triple A-rated performers Brad Pitt (“Fury”), Christian Bale (“American Hustle”), Steve Carell (“Foxcatcher”), and Ryan Gosling (“Only God Forgives”), McKay takes highly complex material and molds it into an involving narrative that follows three sets of characters, each running on parallel paths, all intent with cashing in on the system at the expense of the average citizen. The film is narrated by Ryan Gosling who explains at the beginning that our picture of bankers as stolid and conservative citizens no longer fits the reality. They have gone, he says, “from the country club to the strip club.”

Like Michael Burry (Bale), they even go barefoot, sport a glass eye, listen to heavy metal music and are not the least concerned with what passes for social graces. Burry examines thousands of individual mortgages and realizes that a large number of subprime housing mortgages are “junk” and will collapse sooner rather than later. With no purpose in mind other than to benefit financially from the expected bursting of the housing bubble, Burry puts over a billion dollars of his company’s money into what are known as “credit default swaps,” an agreement insuring the buyer in the event of a loan default, in essence, betting against not only the housing market but the American economy.

These investments, disparaged by the banks, come to the attention of Jared Vennett (Gosling), a subprime mortgage bond manager who goes into business with hedge-fund manager Mark Baum (Carell). Baum, still mourning the recent suicide of his brother is, in many ways, the film’s most interesting character — abrasive and bullying, yet honest with a fine-tuned BS detector. The business also proves interesting to young investors Charlie Geller (John Magaro, “Carol”) and Jamie Shipley (Finn Wittrock, “My All American”), who recruit the knowledgeable ex-banker Ben Rickert (Pitt) to use his connections to help them work directly with the banks.

At one point, Baum’s team investigate a housing subdivision in Florida where they find out that many homes are in foreclosure, that mortgages were bought using the name of the family dog, and a stripper owns five homes with variable rate mortgages. Baum shudders when some young brokers tell him how they have made millions by selling subprime mortgages to the poor and to unsuspecting immigrants. To add more spice to proceedings, McKay uses celebrities talking directly to the camera in order to explain the complicated terminology used by bankers to make sure the average person has no idea what’s going on.

Provocatively sitting in a bubble bath and drinking champagne, actress Margot Robbie (“The Wolf of Wall Street”) explains the ins-and-outs of mortgage-backed securities, while TV food personality Anthony Bourdain compares an unappetizing seafood stew with banks who market bad mortgages as a triple-A rated financial product. There is also a clever demonstration at a casino gambling table using actress Selena Gomez (“Spring Breakers”) to show how Credit Default Obligations (CDOs), the bundling of bad mortgages, can lead to layers and layers of speculation. The three groups of characters cross paths at the American Securities Forum in Las Vegas where it soon becomes evident that the housing market is built on fraud and the banks are massively concealing the worthlessness of their holdings.

The Big Short is one of the best films of the year, a fast-paced ride filled with fascinating personalities that entertains even when it infuriates. The mood only turns dark when you realize that the stakes are bigger than winning a game of Monopoly, bigger than who was right and who was wrong. When the market collapses in 2008 sending the economy into a tailspin, it is Rickert who points out to anyone left who still cares that the consequences for real people are not the loss of stocks but the loss of their homes, their livelihood, and, in some cases, their lives. Not to worry, though, it’s not personal, just business. 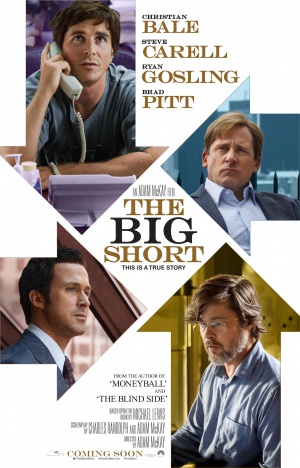