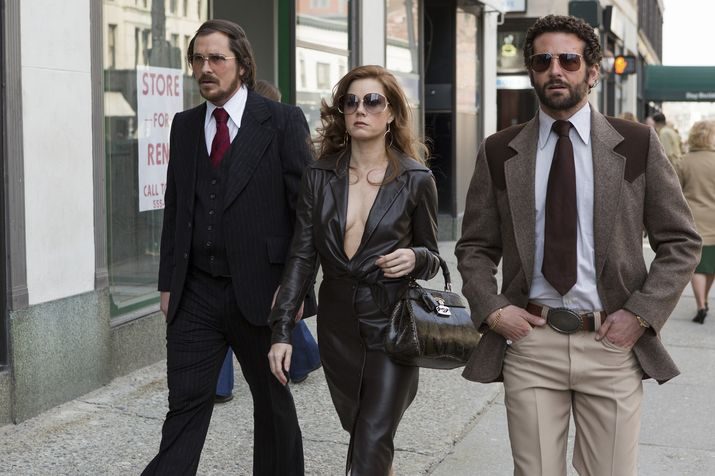 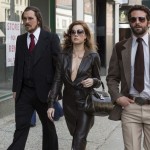 Comb-overs, perms, cravats, disco, embezzlement and corruption — American Hustle has it all and then some. And like Scott Cooper’s film, “Out of the Furnace,” David O. Russell’s production features one of the best ensemble casts of the year. And like that movie it too utilizes Christian Bale to its advantage, but this time he is as a scheming, cheating Long Islander instead of a poor, revenge seeking brother from Pennsylvania.

Adding 43 pounds for the role (the man loves to gain and lose weight for his roles, apparently), Bale plays Irving “Irv” Rosenfeld, a smalltime, chary but ambitious conman who supports his neurotic, young wife, Rosalyn (Jennifer Lawrence, “The Hunger Games: Catching Fire”), along with her young son, Danny. Dealing forged art and swindling desperate people of their cash is, it turns out, a brisk business, so Irv takes on a partner (and a lover) in Sydney Prosser (Amy Adams, “Man of Steel”), who chooses the stately alias of “Lady Edith Greensly” for their increasingly brazen business affairs.

Unfortunately, one of their “victims” is FBI Agent, Richard DiMaso (Bradley Cooper, “The Hangover Part 3”), a borderline sociopath with a lowly status but ambitions of crime fighting immortality. So instead of running Rosenfeld and Greensly downtown, DiMaso decides to use them to catch bigger fish: Powerful politicians on the take and the mobsters that have them in their breast pocket. Orchestrating an intricate, compelling scheme — having an Emirati Sheik come to the states to fund different projects to revive Camden and Atlantic City — DiMaso pledges to bring everyone down.

Dancing between farce and docu-drama, nothing in American Hustle is as simple as it seems on the surface. The deeper down the rabbit hole the players go, layers of the operation (which is very loosely based on an actual sting known as ABSCAM) begin to unravel. Irv develops a dangerous kinship with the Mayor of Camden and quasi-middleman behind the whole bribe, Carmine Politio (Jeremy Renner, “The Bourne Legacy”). DiMaso is enjoying the charade too much and wants desperately to sleep with Sydney. Sydney is playing DiMaso like a flute for her own gain or is she? The US Senators, local politicians and mobsters, like Victor Tellegio (Robert De Niro, “Last Vegas”) have other ideas than their downfall in mind. And what of Irv’s foxy wife Rosalyn — she may just have something to say about it all too. 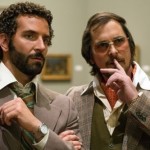 To try keep his movie firing on all cylinders and on course, David O. Russell calls upon some of the major actors of his recent Oscar winning movies, “Silver Linings Playbook” and “The Fighter.” Bale and Adams are the strongest of the lot — he is eccentric, confident and immersed; she with her elegant English accent and powerful facial expressions, is steamy and manipulative (and let’s just say that her cleavage-bearing wardrobe will really steer the eyes of male viewers). Cooper and Lawrence are tight as DiMaso’s curls too — he espousing a reckless arrogance; she is hot and unpredictable (and gives Adams some competition in the plunging neckline department).

Where American Hustle falters is in its uneven delivery. It’s manic all the time but sometimes you’re left wondering whether a revelation is supposed to be comedic or dramatic. And the characters, while well-acted, are very over-the-top. I don’t want to label them caricatures per se, but they are the outrageous epitome of each individual persona type.

Then again, American Hustle is set in “The Swinging 70’s” so maybe everyone and everything was like that and I’m just nitpicking. Either way, David O. Russell has delivered a near perfect movie again. American Hustle is wildly entertaining and even more fun to look at (did people really wear clothes and their hair like that?!). 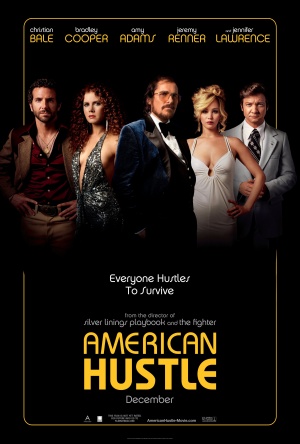