Much like the immediate outlook of its unlucky characters, the details are stark in Arctic.

In Joe Penna’s pulls-no-punches survivalist drama, the seemingly skyscraper-sized “SOS” carved out in deep snow; the remains of a grounded, battered plane that looks like it’s flown through hell and back; and the pop of red of a winter coat breaking a seamlessly, blindingly white winter panorama are impossible to miss — the foundation for a story of clenched-teeth resilience that doesn’t lend itself to rose-tinted inspiration so much as explore the prickly grittiness of how we respond when pushed to our absolute limits, and ultimately beyond.

Even Mads Mikkelsen’s name in the opening credits — the only one to appear before the film’s title, in a movie with only two credited actors — has a loneliness about it, a reflection of the entrenched isolation the next 90 or so minutes are imbued with.

Mikkelsen’s turn is a near-wordless one as a pilot we only come to know of as H. Overgård. He’s mired in a situation where identity is of no importance, a situation located firmly at the intersection of impossible-to-imagine and much-too-realistic.

The only survivor of a plane crash, he’s marooned in an arctic environment we quickly come to identify as barren and merciless, its denizens polar bears and its comfort for humans very much nonexistent. It’s one thing to say you wouldn’t have a picnic in his hellscape; I’m not sure if I could be paid to spend three days there with military-grade provisions.

We never learn the circumstances of Overgård’s crash-landing — whether there was anyone else on board, if a storm threw him to earth, or how long he’s been grounded — and that’s completely fine. It’s more than welcome, in fact Arctic doesn’t show a wife and kids that Overgård might desperately be trying to return to so much as instill a much more primal drive: Surviving, enduring and escaping this blizzardy hell that’s far from a winter wonderland.

Penna, using a too-rare style of show-don’t-tell storytelling that gives Arctic near-unceasing momentum, hints at how long Overgård has been here not by exposition, but by a stream of visual cues. Much of the film’s first half establishes the home base of sorts that Overgård has created, and the routine he’s obviously polished over time. Keep the “SOS” legible for anyone flying above. Check for fish. Crank up a box that is either some sort of radio, GPS or at least an indicator that someone is overhead (the ambiguity is intentional).

Mikkelsen (“Doctor Strange”), who perhaps utters about 50 words the entire film, wears 50 layers and dutifully goes about his tasks. He’s beyond hope — there’s very little of it to be found in Arctic — instead continuing his routine just to keep the blood in his veins from freezing. The routine chirping of his watch feels less and less like a reminder to move on to the next chore and more like an ominous countdown of his final hours.

All the while Arctic creeps along at a deliberate pace with destructive potential, like a slow-moving storm announcing its impending arrival over an already menacing landscape. Even the camera ambles along as if it’s of old age; the man behind it, Tómas Örn Tómasson (“Visitors”), rarely moves his eye, instead relying on static shots to emphasize a constantly inhibiting environment.

Overgård isn’t alone for long. In a circumstances-shattering event, the population of Plane in the Desolate Valley suddenly doubles when he rescues the female passenger of a helicopter he was trying to flag down for rescue.

But there’s a storm kicking up, as they are wont to do in these parts, and, well, you can imagine what happens next. In the wreckage Overgård finds a dead pilot and the gravely injured passenger, a nameless character played by Maria Thelma Smáradóttir (“Fangar” TV series).

Overgård brings her back to his plane and begins to nurse her back to health as best he can. But “as best he can” only takes him so far, and Overgård begins to grapple with an evolved situation: Do they continue to toughen out their conditions and wait for help, with the very real possibility this passenger might not make it another week? Or do they travel to the nearest outpost, painted early on as a clear suicide mission?

His companion’s worsening wound makes the decision for him, and he sets out on foot, pulling his counterpart behind him on a sleigh.

The hike is one of already near-insurmountable odds at the start, and becomes even more impossible of an endeavor. Penna and Ryan Morrison’s script throws as much as it can to crush Overgård’s spirit, and in a place where walking half a mile could garner frostbite, the second half of the film makes it even more of a peer-through-your-fingers man vs. nature experience, the kind of movie that will surely make you feel thankful for the roof over your head, warm food in your stomach and general well-being of your current state.

The screenplay never threatens to overindulge itself, though, rather using the grit and grime of this environment, and the unwanted journey of Overgård and his nameless companion, as a canvas for examining humanity at its most concentratedly dire. It becomes a rumination on spontaneous companionship, the instant bonds that are formed in a situation when human connection feels like a luxury.

Arctic engages not in showing where Overgård comes from, but in its suggestion that maybe it’s okay for him to give up. If we were in such a situation, do we continue to march toward the glimmer of light, or relish its presence while we can? It’s a morbid inquiry, one that only further marinates every second Overgård decides to push further.

Through it all Mikkelsen puts on a subdued performance in which his eyes — and the bags under them — are constantly telling us everything we need to know. His grizzled, increasingly weary Bear Grylls rarely vents his frustrations explicitly, instead continuing to march against the literal and subjective icy winds with another human life in tow, like a spiritual force refusing to be contained by his circumstances. For how little is explicitly expressed by Mikkelsen, though, there’s even less for Smáradóttir to do; we barely ever see more than her eyes, which store oceans of exhaustion.

In a film with minimal dialogue, Penna gets intimate with sounds, his team conjuring them up to piercing effect. It isn’t every movie, even within this genre, that sounds command so much presence. Even more rarely do films use them as a way to manifest emotion, but in the devastatingly lonely landscape being traversed by Overgård, sound is sometimes the only sign of a responsive universe. The suspicious crunching of snow about to give way, the relieving click of a working stove, even the rustle of a photograph as it’s placed on a metal surface — the acoustics of Arctic are its agents of melodrama.

The sound work only emphasizes a situation that Penna never chooses to relent from, never gives us a moment to relax in.

You can trick yourself into thinking you don’t know how Arctic will end, but Penna isn’t out to ruin your day with its conclusion. Narrative suspense, like hope, may be the last trickle of water in Overgård’s canteen, but story isn’t the focus here: Tone and attitude is. And the attitude of Arctic is gruff, tattooed with an authentically unforgiving atmosphere and impressive at carving out tension in spaces in places we don’t expect to be there going in. 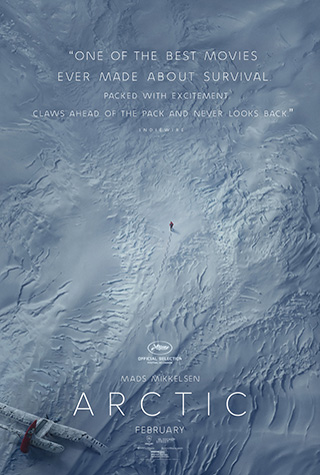