If you watched the trailer for The Gallows, you probably got the impression you were going to see an intense flick in which some high school kids that are involved in some sort of drama production are viciously attacked by a supernatural entity. And while you wouldn’t be entirely wrong, you’ve nonetheless been dealt a disservice by yet another horror film marketing team trying to capitalize (late) on the paranormal phenomena craze. Trailers have gotten longer and longer, and are either showing too much of the plot or showing too little to misrepresent it. The horror genre seems to have taken to the latter (which may be more damning than the former) which is now why I try to avoid them (although admittedly I did see a trailer for this months ago). As it is, The Gallows isn’t intense, vicious or gory at all — I’m not quite sure why it’s rated R — and feels very much like your run-of-the-mill PG-13 found-footage horror film.

In Beatrice, Nebraska, the high school drama class is putting on a production with a negative history: in 1993, the last time the school presented The Gallows, a tragic accident resulted in the horrifying on-stage hanging death of a performer (and why on EARTH the drama director would decide to — pardon the pun — resurrect this show is beyond me). The new 2013 cast is made up of “drama nerds” and the “football jocks” who are “stuck” in the class, hate being there, and hate the nerds. Reese (Reese Mishler) is a football star and his buddy Ryan (Ryan Shoos, “As Night Comes”) is on tech crew and follows everyone around with a camera to document how lame everything is. The female lead in the play, Pfeifer (Pfeifer Brown) is “the drama girl” whom everyone’s annoyed by. In order to help his buddy get out of having to do this HORRIBLE thing (perform in a play), Ryan suggests they break into the school the night before the show and vandalize the set.

Accompanied by Ryan’s girlfriend Cassidy (Cassidy Gifford, “God’s Not Dead”), the three enter the school through a side door with a broken lock and begin taking apart the set. Upon hearing strange noises in the dark, Reese, Ryan, and Cassidy try to leave, but discover Pfeifer who demands to know why they’re there so late at night. After some Drama drama, the four attempt to leave, but find all the doors are locked. They scramble to find a way out of the high school, dashing down dark hallways and hidden caverns (yes, there are caverns under this school), trying to escape a malevolent presence.

Written and directed by Travis Cluff and Chris Lofing, The Gallows is presented as found footage that belongs to the Beatrice Police Department and doubles the actors’ names as the character names. Every single character in this film is a cliché: The mean girl cheerleader, the football jocks, the nerdy awkward stage manager, the born-for-the-stage eccentric drama girl, and, of course, the adults — the goofy drama parents, the stern football dad, and the “I’m just here as a last resort” drama teacher; as a result, you don’t care about any of their fates. When danger strikes, you’re more interested in getting past the next predictable jump scare. The plot is lazy and a means to an end; situations are hurried along just to get the kids into trouble and the requisite rationale is hastily thrown together; for example, to understand why the lights don’t work later in the film, you need to have listened closely to the drama parents who talked about weird things happening since the tragedy, like doors locking on their own, power outages and any other spooky thing that can be rationally explained away. (The end of the main action does provide some interesting possibilities for “why everything is happening,” however, the ultimate end of the film is so strange and laughable it actually takes away from the scene that precedes it, ruining the effect).

Though The Gallows only runs for 81 minutes, it feels longer, taking a very long time to get to any real supernatural action. Too much time is dedicated to stumbling around in the dark, which only works for an audience for so long. The only scene that’s done really well focuses on Cassidy, who has been left alone momentarily while the others search for a way out. It’s framed very well, and the dramatic irony is pretty effective. The scene parallels an earlier moment in the afternoon when Cassidy picks up the camera and vainly checks herself out in the preview screen. Here, in the dark of the school, she’s timidly looking at the result of an attack on her neck, and the Blair Witch-like close-up helps add to the suspense of the moment.

While The Gallows takes its cues from groundbreaking found footage films like “The Blair Witch Project” and “Paranormal Activity,” it just doesn’t have the teeth to put an audience on the edge of their seats the way those other films did. Ultimately, it leaves viewers apathetic. And when you pair that with a weak story, rationale and characters, you’re left with a film that should have been left forgotten on a shelf in the dusty evidence room of the Beatrice Police Department. 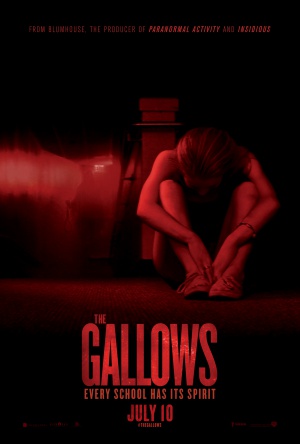