Reinert Kiil is the Norwegian director responsible for the sort-of-okay slasher “Christmas Blood” (“Juleblod”). If that film was a brooding modernization of “Silent Night, Deadly Night” then The House (“Huset”) must be his re-imagining of “The Conjuring.”

On the surface it’s an interesting new twist on the familiar, demon-possessed madhouse setup. Two Nazi soldiers are transporting a Norwegian POW across the snowy Scandinavian plains. They get lost and find themselves in a remote, abandoned house. Obviously, the building has a grisly past — albeit one revealed slightly lazily through disparate flashbacks of past crimes.

The ghosts of the house are summoned by the guilt of its occupants. Kreiner (Mats Reinhardt, “Battalion”) is a regretful SS officer haunted by a little girl, Ingrid, whom he sent to a concentration camp. The backstory of his younger subordinate, Fleiss (Frederik von Lüttichau, “A Room to Die For”) is less clear. He seems to be stalked by a lover with whom he argued before he left for war, and also by Max (Espen Edvartsen, “Dead Snow 2: Red vs. Dead”), a soldier buddy whose death has pushed him into a spiral of rage.

Fleiss blames their captive, Rune (Sondre Krogtoft Larsen, “Lyst”), for the death of Max. Rune is a virtually silent prisoner, and is for the most part oblivious to the ghostly occurrences around him. This only enrages Fleiss further, and much of the character drama gravitates around the Germans arguing over Rune’s fate. Soon, though, the soldiers’ own immediate fate will come into focus, as the apparitions become more dangerous and the divide between reality and nightmare becomes more blurred.

The House is nearly scary on occasions. There’s a very well-staged scene where Kreiner enters a bedroom to sit beside a cowering Ingrid. She appears to be gyrating oddly, as if not quite occupying the space. It’s an effect I haven’t seen before and it’s deeply unsettling. Alas, the setup is spoiled by a lame jump-scare.

Ah, the trusty jump-scare: Those snarling confessions that proper, under-the-skin scares are in short supply. For a film that succeeds in creating such a dense, oppressive atmosphere, it’s shame to report that so much of the film’s fear factor is of the smash-bang variety.

It’s a horror film of two halves: The intense psychological drama of guilt and desperation, coupled with aggressively clichéd genre beats. We get a whole bunch of slamming doors; a creepy journal (which might as well be the Necronomicon); sudden loud blasts of screaming sound; a demon radio; a child’s tinkling music box; cracked mirrors — the whole gang is here.

Narratively, The House is odd: A slow-burner that barely breaches the 80-minute mark. The seesaw of mystery and revelation continues right up until the final seconds, leaving the sense of a plot being given up on once the essential storytelling is done. The result is that it feels both inefficient and unsatisfying at the same time.

A twist in the temporal vortex at the hour mark does just enough to hold the attention, even if it doesn’t fully revive the film. For a moment the film tears up the rulebook, and we truly empathize with someone who is losing their mind; their grip on chronology.

Von Lüttichau’s performance is of special merit. On paper, Fleiss is a vengeful character of irredeemable vileness, yet somehow we connect with his rapid mental demise. Likewise, Kreiner is guilty of unspeakable acts but, thanks to Reinhardt’s measured performance, we allow him to be our main fulcrum of empathy. Working from a script that doesn’t excuse or sentimentalize — or, it must be said, make full use of the historical scenario — the burden of human insight falls on the actors.

Kiil’s film is beautifully and cleanly shot, and great care is evident in every frame. The landscape photography, capturing the silent snowy wilderness, is particularly sumptuous, with whites so stark the trees look black. Inside the house there’s atmosphere in spades — Kiil is the production designer also — even if the filter is so gloomy they might as well have ditched the lights altogether.

Aside from the undeniably eerie sense of isolation, on the micro scale I would question Kiil’s use of space. Where characters are in relation to each other is of particular importance when trying to bring across a sense of paranormal occupation. It’s a problem of Iris Jenssen Nylændet and Silje Rekk’s editing also, but Kiil’s grasp just isn’t tight enough to maximize the scares.

The House isn’t a bad horror film, though it is one that never fully capitalizes on its setting. It’s moody, well-realized and cosmetically original, but just beneath the ice is a lake of cliché. Come for the concept; stay for the performances; walk away and forget about it. 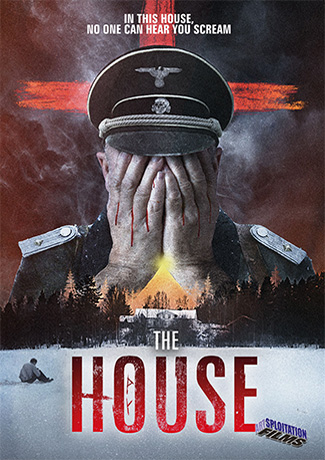