Christmas Blood is rather a bland title. Perhaps in translating from the native Norwegian — the snappier “Juleblod” — they could have jumped to the unused moniker of “Silent Night, Deadly Night”: “Slayride.” Reinert Kiil’s film is very much in the same ballpark as the 1984 seasonal “classic” (there aren’t that many slasher flicks where the killer wears a Santa costume, after all) although it’s not as humorous as Charles E. Sellier Jr.’s film.

Julia (Marte Sæteren, “Pornopung”) lost her mom a month ago, and she’s invited her old friends to her small town in northern Norway to comfort her over Christmas. They include Sanne (Helene Eidsvåg), the sensible teetotaller; Aussie mate Annika (Kylie Stephenson, “How to Matter”); fiery Rikita (Haddy Jallow, “Say That You Love Me”); and Elisabeth (Karoline Stemre, “Vegas”), a deaf and mute minx. Julia did not invite Santa (Jørgen Langhelle, “The Thing”), but he’s coming to town anyway — and he’s wielding an axe!

Far to the south, detective Terje Hansen (Sondre Krogtoft Larsen, “Lyst”) is on the trail of this nasty Saint Nicholas, but it’s a trail that’s gone cold. Reluctantly, he decides to enlist the help of Thomas Rasch (Stig Henrik Hoff, “The Last King”), the only person to have successfully captured the Santa serial killer — until the old bugger escaped again, obviously. Will they zero in on Julia’s house before it becomes a bloodbath? I wouldn’t bet on it.

After an excessively lengthy but well-staged tension scene at the start, Christmas Blood is almost fifteen minutes old before it has set everything up via a series of wearying subtitles, referencing a range of dates which mean nothing to us. It’s a textbook example of too much information obfuscating what should be simple. When bad Santa was captured the first time, why was he locked up at an easily-escapable “secret address” instead of a maximum security prison?

For that matter, why bother with a backstory at all? I’m struggling to think of a slasher franchise (which “Juleblod” is clearly positioning itself to be) where the films’ artistic quality has increased in conjunction with expanded detail about the main nemesis. Indeed, in the case of “Halloween,” much of such detail has since been retconned out of canon.

The prologue exposition dump suggests that all of those on killer Santa’s “naughty list” have been in the media (a broad term) for breaking the law. This got me hopeful about the possibility of a theme of guilt; some kind of subtext about who gets to be judge, jury and — indeed — executioner. But the conceit is dispensed with instantly and has no bearing on the victims or the perpetrator. He just murders folks regardless.

Writer-director Kiil has a good knack for building tension, and the kills themselves are just about varied and gruesome enough to stop repetition creeping in. It’s an atmospherically lit film, if at times needlessly dark. Combined with editing which, when events start really shifting, looks like the killer has had his wicked way with it, on top of Kiil’s tendency to jump back and forth between characters in different locations, there can be confusion as to who is doing what to whom.

Not that you’ll care too much. The lack of a focused main protagonist is a neat and democratic idea on paper, but the wealth of supporting characters renders everyone a cipher. And the killings are as wanton as the genre clichés so it’s hard to become attached to anyone as character arcs are mercilessly cut short.

Take away the Christmas setting — which is really just an excuse for a distinctive monster costume — and there’s nothing to distinguish Christmas Blood from any number of slashers out there. It’s probably too nasty (in quick succession there’s an attempted rape and an axe to the crotch) to be a fun alt-Christmas movie, and too derivative to satisfy slasher aficionados. But it’s fine if you’re looking for the familiar and nothing more. 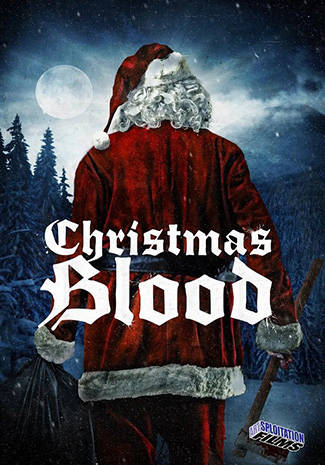