Arena lights are off, locker rooms are empty and primetime TV slots are dotted with holes.

We don’t have to be told that explicitly in Steven Soderbergh’s (“Unsane”) confidently insightful new film High Flying Bird. Curiously empty New York City sidewalks and forlorn attitudes tell us what we need to know: Professional basketball games are at a standstill amid a lockout, something seemingly as inevitable as the rising sun or a Russell Westbrook triple-double grinding to a halt. (Translation: Team owners and players’ representatives can’t come to an agreement, putting on-court action on hold).

But a whole new kind of battle is underway, one the film touts as “the game on top of the game.” And it’s a game that Soderbergh and screenwriter Tarell Alvin McCraney take a magnifying glass to, exposing the centuries-old racial systems that labor relations in pro sports leagues are powered by.

In the hands of a director with trademark kinetic swagger and a screenwriter just two years removed from winning an Oscar for “Moonlight” and channeling his inner Aaron Sorkin, watching the politics of a basketball league (that is essentially the NBA in all but name) play out at a nonstop, infinite dribble is a joy. High Flying Bird is like being in a game of pickup where the stud you’re defending tells you exactly how he’s going to score on you, yet you’re still amazed when he pulls it off.

The fact the movie is a January release on Netflix unfortunately means that match-up is destined to be relegated to an urban street alley rather than Madison Square Garden. Still, the streaming service continues to prove its prowess at attracting high-profile filmmakers, the latest example coming just a few weeks ahead of what might be the company’s biggest moment.

High Flying Bird wastes no time getting to how the situation is impacting human lives (a crazy thought, innit?). Just a few minutes in and André Holland’s (“Selma”) omniscient-seeming sports agent, Ray Burke, and Melvin Gregg’s (“American Vandal” TV series) recent top draft pick, Erick Scott, are trading streams of whip-smart, intellectually suave dialogue from both ends of a restaurant table. The stakes are made clear: Erick needs to be wary of his moves, and Ray of his client. New York has signed the former a contract, but he just wants to play. Meanwhile, the latter has just as much to lose in the lockout as the talented rookie does.

The opening scene feels influenced by the first minutes of Sorkin’s “The Social Network,” not just because of table sitting between them, but in the way it seamlessly introduces the motivations of Ray and Erick, the primary chess pieces we’ll be following over the next 90 minutes, in rapid-fire fashion.

At the same time, McCraney begins building the layers of what will become an unexpectedly perceptive story. It’s one-part scholarly, one-part fleet-footed, and entirely enthralling. “When it comes to selling merch and inspiring lyrics, they need you,” Ray says to Erick at the start. From that point on, we have an idea of what this chess match of a lockout represents beyond dollars and signatures.

It also sets the stage for what kind of movie High Flying Bird is going to be in the traditional sense. It’s essentially a string of conversations that are, for the most part, just as engaging as the opening conversation between Burke and Scott. As we begin to understand more and more the cards held by a lockout’s vital cogs — the agent, the owner, the player, the fan — the clearer the bigger picture becomes.

And it becomes clear in a very organic way. McCraney has the ability to boil down immense ideas about race, commerce and class, synthesizing them into ideas that are not only pertinent to such relationships in the NBA we’re familiar with, but also in the way the film suggests we, the spectator, hold just as much of the power, to say nothing of the stakes.

In an obvious way, High Flying Bird wears its confidence on its sleeve. Actually, it’s tattooed. A basketball movie with barely any actual basketball may be a blasphemous elevator pitch (there is a key scene with some one-on-one action going down in a public court, but even then Soderbergh and McCraney show it’s not a priority by cutting away fairly early), but the film makes it easy to forget about that intentional censorship. This is a tale about rising to the occasion, and that doesn’t just happen on the hardwood.

The charisma of Holland and others like Zazie Beetz (“Wolves”), Bill Duke (“American Satan”) and the scene-devouring Sonja Sohn (“The Missing Girl”) are eminently absorbing, from minute to shining minute. Soderbergh’s direction ensures they’re having fun, even against the backdrop of serious grassroots introspection, and his unique approach to shooting (on an iPhone 8; yes, really) lends to some fascinatingly intimate visuals.

Even in those moments when the story threatens to tread too deep into the foreign minutiae of the league’s inner workings (and, sure, it does wade into that territory at times) the script pulls us right back in with a funny zinger, an unexpected twist or another social media-age examination of the struggle between race and class, one where the two sides — ownership and players — are divided not just by skin color, but by expectation.

The paychecks may be lofty, but so are the stakes — it’s a jolt to see businessmen in $900 suits discuss having to cut their losses while their offices loom 50 stories into the Big Apple sky, but it makes us understand they could come tumbling back to Earth with each second the lockout remains in place.

This is 2019, however, a year in which society is beyond woke enough for that not to be an earth-shattering revelation. And High Flying Bird doesn’t treat it as one, instead using it as a template for some ruminations and possibilities that could make the Robert Krafts and Donald Sterlings of the real world sweat.

Where the film eventually goes in its third act, when orchestrating the chess board begins to pay dividends and we’ve realized we can’t view the NBA the same way again, is supremely satisfying, even if it takes rewatching the final 20 minutes a few times to fully comprehend what unfolds as sneakily as a heist. By the time the film addresses the rules it itself established about the ecosystem in High Flying Bird, it shatters them in ways akin to something we didn’t know we were longing to see about a system we thought we were very familiar with.

Big Brother is watching in High Flying Bird, but not as closely as he should be, and the resulting game is one with implications that resonate long after the credits roll. 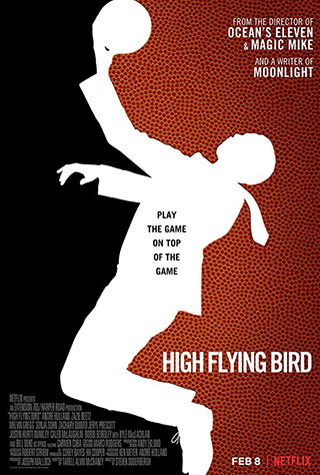