I’m not totally sure if A Vigilante — the feature debut from writer-director Sarah Daggar-Nickson — is meant to be soaked up as entertainment so much as a reconciliation between movies-as-art and movies-as-therapy. The small-scale story is interested in a single dominating issue, that of domestic violence, though in ways that feels inconsistently intentioned, despite the high amount of promise on display by Daggar-Nickson.

Her screenplay is a contemplative, slippery ice puck of a revenge-fantasy story, slip-sliding everywhere in chronology and priority. The movie has some interesting, if questionable, points to make about an issue that many other films are frustratingly content with circling overhead of, namely: Does eye-for-an-eye have a place in the age of #MeToo? Where is the line drawn between moving on and fighting on, and — more urgently, at least in the movie’s purview — are they one-in-the-same?

A Vigilante starts quick with a no-nonsense opening, its bluntness dropping anchor and its succinctness hammering it in. Sadie — played by Olivia Wilde (“Love the Coopers”), looking wearier and more downright disrupted than she ever has — is punching away at a bag as if her life depended on it. Perhaps it very well does. Tools of disguise cover a nearby tabletop; colored contact lenses, wigs, makeup, and a thumping score makes it seem as if Sadie is fighting against time itself. Perhaps she is.

Then, suddenly, she’s sitting in a living room, and another woman is taking the coat from a man we assume is her husband. It’s obvious he’s been told Sadie is there for reasons opposite her real intentions, which consist of delivering demands: Sign the house to your wife, transfer a small fortune to her account, leave and don’t ever come back. “I know what you do to her and the kids,” she says. The icy resolve in her voice is enough to make clear to us what he does, too.

What she is giving him isn’t an ultimatum; it’s an order. And with a moment of brute, physical, almost-laughably-effective force, she makes that clear to him. And follows it up with a smile.

For much of the first half of the film — which skirts along at a can’t-complain-here 80ish minutes — we observe Wilde in such a capacity, acting as judge, jury and executioner of domestic violence situations unfolding around her. We’re never 100% sure what connects her to the victims she helps, if there is a secret place the vulnerable in this community go to drop secret messages and await further instructions, and we don’t know, at least at first, why she does it.

It isn’t too long, though, before histories catch up with actions, causes with effects. Clarity brightens the darker parts of this story — what emerges is something darker still, a survivalist tale that’s equal parts thriller and psychological drama.

And its drama plays out in a world thick in visual contrast. The cinematographer, Alan McIntyre Smith (“White Rabbit”), is appropriately fixated with bringing grimy details to the fore, almost to the point of suggesting Sadie’s vigilante excursions are a figment of her imagination. The idea isn’t quite so obtuse when considering the repeated, at-first unexplained motifs of Daggar-Nickson’s story — a map of the surrounding area meticulously being shaded in by Sadie, her bunking in a motel, the drawing of mysterious origin that serves as an emotional anchor — and it’s only made more enticing by the film’s tendency to feel like it’s unfolding against the backdrop of a post-apocalyptic world. For these women, it may as well be.

What powers A Vigilante as a specimen of a movie deep-seated in anger, activism and the relationship between the two is Sadie’s routine. In helping abuse victims grab control of their lives, she wears a sheen of cold confidence that always feels like it may slip at the very last second, until we see her sobbing later in a car — emotionally bare, continually haunted by her past and how it’s reshaped her present. She seems as unsure about her actions as she is tactile in the moment of carrying them out, and it’s that tension, elevated by Wilde’s transformation, that keeps A Vigilante thoughtful and interesting for most of its first half.

It’s also these moments that make you wonder, as Daggar-Nickson might be, about Sadie’s driving motivations: Is she primarily out to help others, or does her moonlighting as a rescuer provide a Novocain to her own past? You can find your escape from the thicket of a thorny history by staying on the dimly-lit path, but Sadie prefers to slash her way out and deal with the scratches later.

Whatever the answer, she carries out her tasks out with a precision made transparent through Wilde’s almost unsettlingly calm demeanor. The actress puts on a fantastic turn as a reaper of karma, her eyes at times bulging out of their sockets as they strain to find the kind of humanity she’s desperate to believe still exists in a world completely changed after her own experiences. She’s a damaged soul that brings to mind Lisbeth Salander, sans the tattooed feathers that makes the latter a figure we’re so immediately eager to learn more about.

But Wilde is more interesting when she’s not exacting punishment, and at her best when she’s at a loss for ways to reckon with what has left her unwilling or unable to be at peace with stillness, as if the quiet itself will jump out and harm her.

The movie’s insistence on ping-ponging between different parts of the the story’s timeline hinders, almost obfuscates completely, the arc Sadie takes from victim to vigilante. Once Daggar-Nickson’s screenplay arrives at its most head-scratching part, I almost wished the details of Sadie’s past had been kept ambiguous. In what the director-writer seems to think is a boost to the story’s momentum — in reality, it halts it — A Vigilante goes out of its way to abrasively suggest that survivors of domestic violence should feel guilty that they aren’t the ones who have been buried as a result of their situations.

Survivor’s guilt is a very real thing, of course, but Sadie comes across it not of her own accord. It’s that decision that is so confounding, especially when presented as the final puzzle piece in building her up to become the kind of person doing what we see her do in the film’s opening minutes. What has felt, to this point, like a well-developed story nonetheless spliced and diced a la “Pulp Fiction” is now the study of a character who hasn’t come to be where she is by organic means.

The movie’s second half, meanwhile, made me wish so very hard that a A Vigilante had been a short film. Without spoiling, the story goes from a seemingly foundational message that not knowing how to cope with horrible experiences is not only human, but that it’s okay, to a final act that sternly and annoyingly conforms to movie standards by exclaiming it actually does know what’s best. And what’s best for Sadie doesn’t quite feel like it transcends the boundaries of the medium the way everything we’ve seen up to this point has suggested.

The eventual climax is, in a sense I suppose, empowering. But it’s empowering in ways that force us to evaluate what it means to be empowered, which might have been Daggar-Nickson’s intention all along. One of the things that nearly turns A Vigilante completely on its head, and not for the better, is in its thinking that we have to be told how to return from trauma and that doing so is an urgent matter, instead of figuring it out for ourselves, and in our own ways, and on our own time.

Sadie, robbed by her agency, eventually has the chance to have it returned to her. But we’re never quite sure if it’s in the form she really wants, or if it’s in the form the screenplay has puppeteered her into accepting. In turn, I’m not quite sure if it’s the form I wanted as a spectator to her story, either. But Daggar-Nickson should be credited for delving into a conversation movies rarely interest themselves in. C’est la cinema. 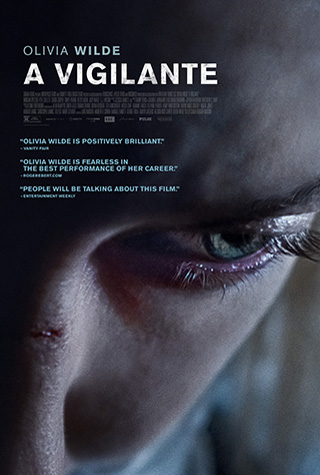