The most dramatic sequences of 2018’s Best Picture, “Green Book,” involved the piano playing of Doctor Don Shirley. In another recent awards winner, “Bohemian Rhapsody,” the recreations of Freddy Mercury’s performances proved to be a high point. These sequences, well-rendered by directors Peter Farrelly and Bryan Singer, respectively, are put into the shade of the electrifying musical display of Rocketman. While the release date makes its presence at the next Academy Awards dubious, the film speaks to the remarkable power that can be achieved through the successful synthesis of film and music.

After covering some of the direction of “Bohemian Rhapsody,” director Dexter Fletcher (“Eddie the Eagle”) here flexes his creative chops, creating a truly distinctive, utterly captivating film that blends biography with musical, confession with friendship, clear storytelling with extraordinary style. An accusation made of many a film is the privileging of style over substance. In the case of Rocketman, substance is beautifully intertwined into style, as Fletcher tells the story of the life of Elton John, a story that incorporates unhappy childhood, remarkable talent, difficult relationships, a meteoric rise to dizzying heights followed by sheer drops, much of it fueled by all manner of intoxicating substances. As Elton (Taron Egerton, “Robin Hood”) explains in his rehab group discussion, he is addicted to alcohol, cocaine, prescription drugs and more, as well as shopping. This discussion forms the framing narrative of the film, as Elton confesses all to his fellow addicts, while past and present, fantasy and reality intermingle.

This intermingling makes Rocketman an atypical biopic. The film does not present dates on screen, instead relying on visual cues to indicate the period, such as cars and fashion. While the composition of Elton’s songs — in collaboration with Bernie Taupin (Jamie Bell, “Fantastic Four”) — help structure the narrative, the songs do not appear in chronological order, giving the film the sensibility of a playlist on shuffle. Mood and emotion determine the song, which thus determines the event, from the young Reggie Dwight’s (Matthew Illesley) initial forays on the piano to early gigs before stardom and its associated problems come calling. Travelling this tempestuous path is a superb Egerton, delivering less an impersonation of Elton as a barn storming interpretation. Egerton makes extraordinary talent seem perfectly ordinary, while also expressing Elton’s exhilarating/excruciating juggling of private and public roles. Beneath all this, we see the utter agony of a man desperate to be loved, finding that love through performance and, when that fails him, pursuing a similar high through intoxication.

Much of the film presents Elton as isolated, be that in his family home, his subsequent mansion or on stage before legions of fans. However, he is also surrounded by a set of striking supporting acts. Aside from the long-suffering Bernie (an excellent Bell), Elton has a complicated relationship with manager/lover John Reid (Richard Madden, “Cinderella,” on creepily smart form) and a strained bond with mother Sheila (a barely recognizable Bryce Dallas Howard, “Jurassic World: Fallen Kingdom”). In addition, Stephen Graham (“Yardie”) almost pockets the whole film as album producer Dick James, who in a handful of scenes gives Elton and Bernie their big break as well as some withering put downs.

Across these interpersonal stories, Fletcher utilizes a range of visual styles: A distant camera in the love scene between Elton and John highlights the lack of emotional connection, while the scenes between Elton and Bernie are more intimate and often capture the two creators’ faces in the frame, highlighting the homosocial relationship at the heart of the film. Family scenes are often painful, the young Reggie yearning to gain affection from his emotionally distant father Stanley (Steven Mackintosh, “Gold”). While early scenes can evoke some sympathy for Stanley, an attempt at a reconciliation may generate hatred, this reviewer muttering an epithet at Stanley’s effective denial of his son. It may be clichéd to have Elton’s overall arc determined by a lack of childhood affection, but it works nonetheless, providing an emotional base note which underlies the various melodies.

Amidst this very fine conventional structure, characterization and performances, however, Fletcher’s master stroke is telling the story of Elton John as a musical. Scenes spill into song in a way that may surprise the viewer but always feel of a piece rather than jarring. The film eschews the weightiness often associated with biopics, maintaining an effervescent tone that fizzes and sparks from Elton’s creativity to his hedonistic consumption. At times Elton becomes actually weightless, floating away from his piano at a series of venues that steadily increase in size and grandeur. This defiance of gravity extends to the camera, which often captures the musical numbers in long, fluid takes that recall classic Hollywood musicals. An early bravura sequence follows the older Reggie (Kit Connor, “The Mercy”) through a pub, out into the street and through a fence into a carnival, where a hidden cut transforms Connor into Egerton, filled with the fire and force that makes Elton the performer he is. Style and substance combine as the vibrant camera expresses Elton’s volcanic talent, his eruptions further emphasized by the extravagant outfits Elton dons at his gigs, which are all the more absurd by virtue of being true, as any quick Google for Elton John will demonstrate.

Rocketman succeeds on multiple levels — as a sensitive portrait of a tortured soul; as a fitting tribute to a remarkable talent; and as a toe-tapping, ivory-tinkling, spirit-elevating musical extravaganza. Whether you have an interest in Elton John as a person, a love for his music, a fondness for musicals or indeed none of these, there is more than enough joy, pain, genius, verve and sheer energy to leave anyone still standing. 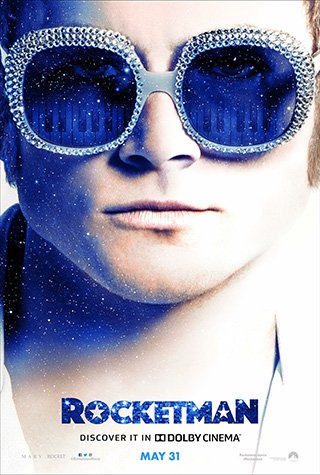