Martin Luther King’s message that people should be judged not on the color of their skin but on the content of their character came one year too late to reach the folks encountered by black Jamaican jazz pianist Dr. Don Shirley (Mahershala Ali, “Hidden Figures”), in his 1962 concert tour of the segregated Deep South. In Peter Farrelly’s warm and human comedy/drama Green Book, Shirley undertakes the journey together with Tony Vallelonga (Viggo Mortensen, “Captain Fantastic”), a night club bouncer who is known to his Italian mob pals in the Bronx as Tony “Lip.” While Tony was hired to do the driving, his main job, unacknowledged though it may be, was to provide physical protection for Shirley from any unwanted encounters with the locals south of the Mason-Dixon Line.

Inspired by a true story (isn’t everything?) and co-written by Nick Vallelonga and Brian Hayes Currie, the film’s title refers to the “Negro Motorist Green Book,” a guide used for many years by black travelers looking for hotels and restaurants in the Deep South where they can feel safe from discrimination and physical harm. Needless to say, neither the hotels nor the restaurants have many stars in the latest Michelin guide. We are first introduced to Tony who is working at the legendary Copacabana, a mob-connected New York nightclub known for its ability to attract name entertainers such as Frank Sinatra, and Sammy Davis Jr. When the Copa closes for renovations, Tony is open to an offer to become a driver for Doctor Shirley whose ostentatious living quarters above Carnegie Hall, to quote former U.N. Ambassador Adlai Stevenson, “staggers the imagination and converts vanity to prayer.”

Racism is not foreign to Tony’s outlook on life as shown when he throws the glasses used to serve water to black workmen in the garbage, but he is open to new experiences. Even though the tour will take him away from his wife Dolores (Linda Cardellini, “The Founder”) and his two small children for eight weeks, Tony promises to write often but will need some assistance from his cultured employer. As two Cadillac’s make their way along the highway, one containing The Don Shirley Trio’s cellist Oleg (Dimiter D. Marinov, “Act of Valor”) and bassist George (Mike Hatton, “Vigilante Diaries”), and the other the reserved and tightly-wound Shirley in the back seat and the chatty, uninhibited driver in the front.

Though the two travelers have little in common, their witty interplay on the road expands Don’s horizons as Tony provides samples of Little Richard, Chubby Checker and Aretha Franklin and, after much resistance, introduces him to the gourmet pleasures of Kentucky Fried Chicken (heaving their bones out of the window). Meanwhile, Don offers Tony some assistance with his grammar and teaches him about Orpheus and his demons, neither of which he needs to know to do his job. When they leave Pennsylvania and Ohio and head for Raleigh, Macon, Memphis, Little Rock, Baton Rouge, and Birmingham, however, things are no longer a laughing matter.

The pair get their first dose of reality when they hit their first “Green Book” stop, the run-down Carver Courts Motel to which Tony offers the relevant comment that “it looks like my ass.” While Don maintains his haughty above-the-battle demeanor, it soon becomes obvious that much of his persona hides a gnawing loneliness that becomes more evident as the two make progress on their journey. Encounters with the police and a confrontation with unfriendlies in a bar are just the tip of the iceberg and Don is forced to rely on Tony’s considerable skills as a Bronx tough to get him through some physically threatening moments. The irony for Shirley is that he is a much sought-after artist who performs for wealthy white audiences but is prohibited from eating in the same restaurants, using the same bathrooms, or sleeping in the same hotel with those who pay good money to hear him play.

Though Green Book suggests that these abominations are things of the past, we know better. During the performances, however, there is no black and white, no rich and poor, no coons or queers, only the exquisite power of the music which transcends hate and, at least for those few moments, reminds us of our common humanity and the fields of gold we all play in together. They are moments that can help us, as American poet Langston Hughes put it, “to shatter this darkness, to smash this night, to break this shadow into a thousand lights of sun, into a thousand whirling dreams of sun!” 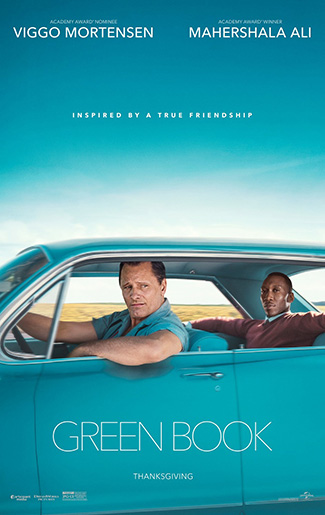