It’s hard to believe that Road to Hell is Albert Pyun’s 50th movie, and even harder to believe that he still can’t make a decent film. Originally shot in 2008, it’s surely a labor of love for the micro-budget auteur, although I’m not sure how much love it’s likely to receive beyond the initiated.

Heavily inspired by (i.e., an unofficial sequel to) Walter Hill’s 1984 “rock and roll fable” “Streets of Fire” — which also starred Michael Paré — Road to Hell is a baffling journey through the purgatory of the soul. And purgatory, it seems, is filled with seriously dodgy greenscreen.

Written by Pyun’s wife, Cynthia Curnan, the confounding plot is presented by the Archangel Gabriel (Joei Fulco, “Heidi”), and centers for the large part on Caitlin (Clare Kramer, “The Gravedancers”) and Ashley (Courtney Peldon, “Freeloaders”), lesbian strippers who are wanted for murder.

At this point, those expecting a “Natural Born Killers” or “Wild at Heart” road trip nightmare, or perhaps a grungy “Thelma and Louise” update, would do well to temper their hopes.

The girls stumble upon an ex-military hitch-hiker named Cody (Paré). He’s waiting for his daughter Ellen (Roxy Gunn) to come by, as she is due to play a gig in Edge City. (The title for “Streets of Fire” was inspired by Bruce Springsteen’s “Darkness on the Edge of Town” and Edge City may also be a reference to Alex Cox’s “Repo Man,” another 1984 oddity).

Ellen was also the name of Diane Lane’s character from “Streets of Fire.” So, we get flashbacks to the elder Ellen as well. Except these are re-imagined, with someone else lip-syncing the Lane role. It’s a rabbit hole of meta that is inconceivable to explore.

A good (by which I mean bad) chunk of Road to Hell is spent loitering at the side of the road, waiting for Ellen. Waiting for Godot this ain’t, though, as Cody is keen to move on from the overripe dialogue and start punching women. He’s lousy with PTSD, and he just wants his daughter to come along and fix his view of females. Paré does good brooding, but such is the quality of the script, it’s hard for us to muster any empathy, let alone sympathy.

Road to Hell is essentially fan-fiction for “Streets of Fire” fans, imagining what might have become of Paré’s character following that story. The movie also acts as an extended music video for “The Roxy Gunn Project,” a pretty ordinary Las Vegas rock outfit. And it’s a music video straight out of the 1990s, to boot: All over-saturated sunsets and faces superimposed on dusty landscapes. The road leads to a climactic concert scene, which is okay, but incongruent with everything that preceded it.

All of the desert scenes were clearly shot indoors against greenscreen. It’s a unique aesthetic — at times like “Sin City,” only brown and gold instead of monochrome. It’s also hideous to look at. In Pyun’s defense, there are some attempts at style and texture, and there’s a detectable mood of melancholy and menace.

But on a narrative level it’s just so wildly incoherent. The director is working from a manifestly un-cinematic script comprised of an awful lot of tell and not much show. It’s rambling and filled with cod-philosophy. Some would call it subtext; I’d call it bad storytelling.

Road to Hell certainly reaches for something different, even if it is terrible. Like virtually all of Pyun’s output, while watching it one is mesmerized by the shoddiness of the craft. Yet one also can’t shake the feeling that a cult following could await. Albeit a very small, niche cult. 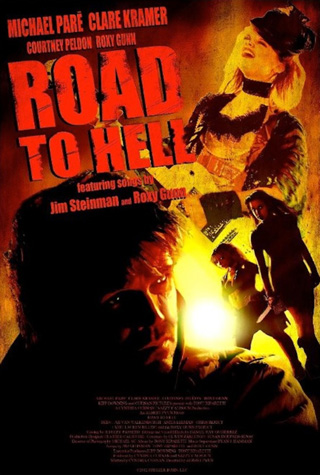