Write When You Get Work starts off with promise. The opening image is that of a young couple, rolling about on the beach, caught up in their own little sensual bubble. This is a good enough tease, where we are invited into their relationship but not bogged down with details, the movie excelling in the “show, don’t tell” means of story-telling. There are moments in the movie when the past suddenly intrudes, which adds an interesting layer to framing of the narrative. This allows us more insight into the life they shared — a life of passion, crime, with everything taking a turn when the woman gets pregnant. We move from the grit and sexiness of the sand to the harsher present reality of them leading lives separate from each other.

Jonny (Finn Wittrock, “La La Land”) is the more dazzling one of the two, still stuck in his old criminal ways, his mind consistently hovering over his next money-making scheme. Ruth (Rachel Keller, “Legion” TV series) on the other hand, has tried to move on from her past, loving her job as interim head of admissions at a fancy all-girls school. After years apart, the two run into each other again at the funeral of the man they call Coach, who was an important parental figure in both their lives, more so for Ruth. In an effort to remain a more permanent part of her life, Jonny literally breaks into her home, with the argument that if she didn’t want him to, she would have used better locks and wouldn’t make it quite so accessible for him. Jonny’s behavior here is a bit worrisome, since it gives the impression that if a woman doesn’t want a man in her life, this is because he is not being insistent enough. The saving grace is the mutuality of the love shared, since it becomes clear that Ruth’s decision to stay away from Jonny is not because her feelings are not there, but due to the idea that he is the symbolic representation of a life she is trying to leave behind.

When Write When You Get Work focuses on the love story between the two, this is where it shines. Unfortunately, those moments aren’t many, since the second act involves a heist of sorts, with Nan Noble (Emily Mortimer, “Shutter Island”) coming into the picture. She is the perfect target — isolated (she and her husband aren’t very well-liked) and vulnerable since the lifestyle that she has grown accustomed to might be going away because of her husband’s criminal activities. There are weird, intimate moments between Jonny and Nan, which I think is mainly there to highlight her vulnerability. She is no longer trusting her husband, and chooses to trust a stranger instead, though she has no idea who he is. There is definite commentary on the lives of the rich here, where Jonny being a part of the spaces the rich inhabit is why Nan decides to “invest” in him. There is superficiality to the relationships formed in these spaces, where people aren’t really close or intimate, and can spend time with each other despite not being fond of one another. The community of those not as well-off are painted in contrast, with everyone who spent their childhood together still hanging out and heavily involved in each other’s lives.

This is the realization Ruth comes to at the end, where trying to be better or make a difference does not necessarily mean a denial of the world that you came from. So in the end the rich get their just desserts, and Jonny and Ruth get their happy ending. It feels all too convenient and Robin Hood-esque, almost too fantastical for a movie that has dwelled on the realness of life for the bulk of its duration. Or maybe all we really need is love, and I am far too much of a cynic to appreciate that. 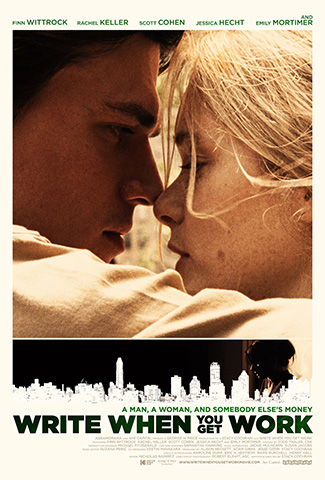