Dead Squad: Temple of the Undead is a full-fledged assault on your brain, particularly the pleasure center parts that produce serotonin and dopamine. If you have the endurance to stick it out to its conclusions, your only happiness will be derived from the arrival of the end credits. I know it seems like I’m hedging a little here, so I’ll be blunt — this is a no-good movie that will not make you happy.

What’s it all about? Well, a trio of college-age boys — Daniel (Jonathan Looper, “Happy Hunting”), Ethan (Guy Talon) and John (Ryan Sobolski, “The Crossing” TV series) — meet a troika of college-age girls — Tiffany (Bianca Zouppas, “Our Best Selves”), Jennifer (Elizabeth Morse) and Aneesha (Alina Carson, “The Possession Experiment”) — somewhere in what I assume is South America (the location is classified, the film tells us). They spontaneously decide to go rafting down a serene river to take in the sights. Their first stupid decision is to take a fork in the river that’s plainly cordoned off and bears a sign warning travelers not to enter. And that’s when they find the titular temple, hidden in the middle of the jungle. And then their boat floats away (or did it?), which is not a spoiler because basically the entire movie consists of their trying to escape the hidden temple. If it sounds similar to a Nickelodeon show, you’re probably a ’90s kid.

The film opens with a brilliant (seriously) flashback sequence taking place in the 1950s. A garden-variety evil Nazi scientist, now in the employ of the Americans, injects a soldier with a super-secret super serum. (The soldier is not happy with this.) The entire scene is shot in black and white with just a tiny splash of color — see if you can guess which color — and the effect is magnificent and provocative.

Unfortunately, we then move along to the present with our sextuplet of dummies. Naturally, they’re quickly trapped in the temple and encounter scads of weird beasties. They begin to disappear, one by one, but at least a couple of them get in some rumpus beforehand. But what are these beasties? Maybe it has something to do with the Nazi scientist from the flashback? Well, we the audience, we get the connection. But even as our six Fulbright Scholars run into electricity, cameras, monitoring equipment, and the like, they cling to the notion that they’ve discovered ancient ruins. And, as you might imagine, they fit all sorts of stereotypes: The slutty bimbo, the dopey jock, the preening sidekick, the sensitive lad, the don’t-touch-me girl, and miscellaneous. I think I might have found these stereotypes bearable, even relatable, if any of the actors possessed even an iota of talent.

I’m reminded of the 1960 movie “13 Frightened Girls,” directed by William Castle, which for most of the young actresses was their first and only screen appearance. And for good reason. I feel the same way about the youngish actors in this film. It seems to me that most of the budget for Dead Squad: Temple of the Undead was allocated to that flashback scene, with a bit more for some good costumes and makeup, and not one penny toward acting lessons for any of the apparent neophytes in this bunch. I mean, I’ve seen flatter deliveries from a pancake mailman. The performances are so terrible that you root for everyone, even the “good” kids, to be slaughtered wholesale. That probably wasn’t the aim of the writers.

The ending contains an entirely unnecessary twist. Look, the movie’s plot is basic as it is, so there’s no need to get “creative” and try to shoehorn drama where none needs to exist. I’m being intentionally vague on the off chance that someone reading this decides to undergo the supreme torture of watching the movie. I don’t do spoilers! But seriously, the last scene is even dumber than the preceding 80 minutes, if that’s even possible. Dead Squad: Temple of the Undead, with its (also) unnecessarily cumbersome title, is pretty much worthless. 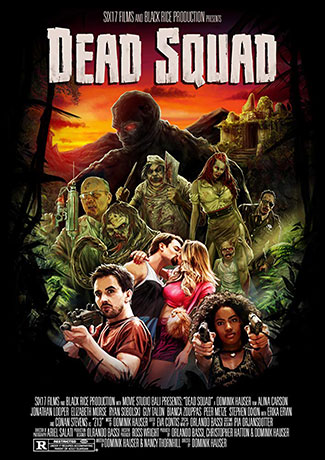