Sperm swimming toward an egg and the sounds of satanic incantations. From the opening shot, Gonzalo Calzada’s film, Luciferina, is unambiguously concerned with demonic possession and motherhood. That it sticks to its themes must be applauded — but in the actual experience of watching the movie there is less to applaud.

Natalia’s (Sofía Del Tuffo, “I Will Wait for You”) mom had serious mental health issues which led her to suicide, and she cut up her husband when he tried to stop her. Natalia’s dad is now catatonic. So, naturally, the only way for Natalia and her wayward sister Angela (Malena Sánchez, “Super Crazy”) to find out the truth behind their parents’ private past is to take a boat into the wilderness and get whacked on peyote.

Natalia is a nun, by the way. She’s only been at it a couple of years, but she’s already the worst nun in the world. She smokes, masturbates, lusts after a boy she’s just met, and she’s prepared to take drugs and indulge in a pagan ritual in order to contact the dead. Thinking about it, there’s no reason for her character to be a nun at all — it’s just so that someone can tell her to have faith.

The Black Mass trip is Angela’s idea. Angela — the devil to Natalia’s angel — hangs around with a motley group of friends. One of them is Mauro (Francisco Donovan, “The Clan”), whose favorite hobbies are bullying and sexual assault. None of Mauro’s friends like or approve of him, least of all the gentle soul Abel (Pedro Merlo, “The New Life”). So, it’s not clear why they associate with him, other than for the sake of some contrived movie conflict (after all, who needs character development when you can have them arguing from the very beginning?).

Natalia is being tormented by visions: Vivid dreams about a shrine in the woods, where she’s haunted by the girl out of “Ringu” wearing a cheap zombie mask. The mystery of this dream is cleared up oddly quickly, moments after Natalia arrives in Tigre. No sooner has the boat landed, Natalia, triple-traumatized by the death of her mother, an aggressive poltergeist and an attempted rape, decides to wander into unknown woodland alone. Of course.

Once the kids complete the ceremony — no one mentions that drinking blood might be a questionable idea — Luciferina takes a turn. Not a very interesting turn, but a turn. There’s a whole bunch of running around castle ruins, jump scares and eye removals. It’s like a cheap, slightly more dour version of Corin Hardy’s “The Nun.” This is the level of comparison we’re working with here — forget “The Exorcist,” or even “The Exorcism of Emily Rose,” or even “The Last Exorcism.”

There’s no wit or originality in the script; and actually very little happens, yet somehow the film bumps up against the two-hour threshold. I think half the runtime is taken up by the scene where they trap the devil in a huge ring of salt. Efficient storytelling this is not. I’ve already mentioned the laziness of the characterization, and we can add to that multiple occasions where a character will either fall asleep or faint and wake up in completely different circumstances. Lazy, lazy transitions.

Luciferina doesn’t even have the grace to be so-bad-it’s-good, except for one hilarious scene where Natalia and a wise old crone creep up on the Lord of Darkness while he’s taking an afternoon nap. Such unintentionally funny moments are unfortunately few and far between. It’s not like the filmmaking itself is stylish enough to distract us from the boring events. There are some nicely-composed shots, and the lighting is functional, but it all has the look of a TV movie before TV movies were as good as cinema movies. The climax (in more ways than one) looks like an ’80s music video, complete with slo-mo and a wind machine.

At a high level, Luciferina makes no sense, and this trickles down into every aspect of the production, poisoning it with nonsense. It’s like the second unit found a bunch of creepy-looking ruins and then Calzada wrote a script around those places. The characterization is nonsensical, the dialogue is first draft material, and the way the scenes connect is fundamentally broken. There’s no tension and not a single lasting horror image. Exorcise it from your watchlist. 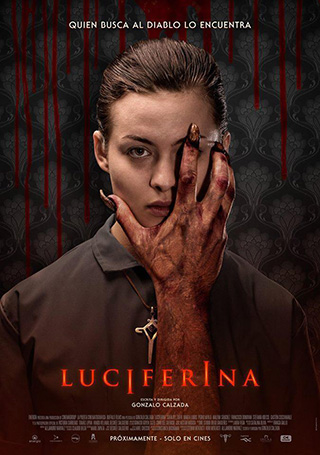