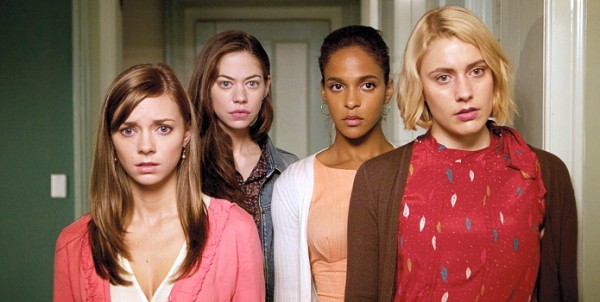 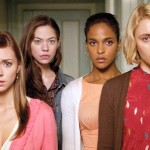 Damsels in Distress is perhaps the most pretentious screenplay ever filmed. I imagine there was a more comprehensible first draft and then writer/director Whit Stillman (“The Last Days of Disco”) pulled the thesaurus off the shelf and went to work. These damsels come across more as ridiculous caricatures than actual flesh and blood characters; nobody could retain any sort of patience around people who talk nonsense the way these girls do.

Lily (Analeigh Tipton) arrives as a new transfer student to Seven Oaks University. During orientation, a group of girls seemingly pick her out at random to join their group; perhaps it is because her name fits the floral naming scheme. Violet (Greta Gerwig) is the leader of the bunch followed by her one-dimensional acolytes, Heather (Carrie MacLemore) and Rose (Megalyn Echikunwoke). Violet talks incessantly about the goals of the group which include finding and improving boys who are not particularly good looking or intelligent and staffing the volunteer Suicide Prevention Center. The answer as to why a somewhat normal Lily would so eagerly say yes to joining up with this gang and rooming with them is not forthcoming, but then again, there would be no film if she did not.

The damsels have incredibly keen senses of smell and frequently sniff soap whenever unhygienic dorm dwellers walk by. They are also exceptionally open and frank about their feelings. Violet thanks Lily for chastising her for being hypocritical about arrogance and routinely references Lily as better looking and skinnier. This sounds duplicitous on Violet’s part, but it is not. She really is that open and sincere . . . and blatantly leans towards a more psychotic end of the mental spectrum.

Seven Oaks is not your normal university, either. Instead of a Greek system, they have Roman Letter Houses. So many students are depressed that they take to jumping off the roof of the education building; unfortunately it is only two stories tall so instead of killing themselves they only maim. As for suicide prevention, the route to recovery is neither mood altering pills or talk therapy, but tap dancing led by an instructor calling himself Freak Astaire (Nick Blaemire).

Like I told you, Damsels in Distress is pretentious beyond belief. 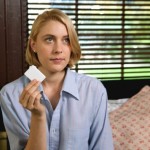 Holding a piece of paper.

There is no particular plot thread or story arc to tie the action in the movie together. It is more random episodes and contrived situations to spur more inane commentary about the student population and the subject of depression. There are men in the film who cause bits of conflict within the group such as Fred Packenstacker (Adam Brody) and Xavier (Hugo Becker) who has an unhealthy infatuation with a sexual maneuver best left unsaid. Furthermore, an undercurrent storyline is unashamed stupidity on the part of almost all of the males. One guy does not know primary colors and gets extremely upset when he sees a rainbow and another is fixated on his bean ball.

I want to impress upon all potential viewers out there that Damsels in Distress is truly as awful as it sounds. And Greta Gerwig, who eats up most of the screen time, (and on an unrelated note was excellent in “Greenberg”) is far too old to play the role of an undergraduate. It’s a noticeable unintentional laugh, because there are simply too few of the intentional variety to make sitting through this 99 minute calamity anything other than a waste of time.

'Movie Review: Damsels in Distress (2011)' has no comments 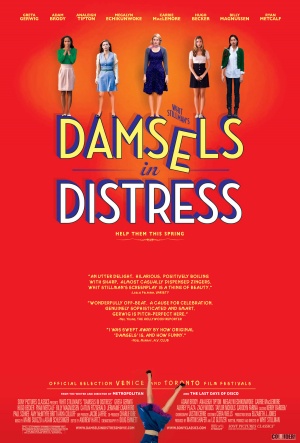