Years ago, I remember going to my local run-down McDonalds and while impatiently waiting for my greasy order to arrive, my restless eyes laid upon a bronze rectangular plaque of a middle-aged man named Ray Kroc. I wondered, “Who is this dude?” As I read the brief epitaph on the plaque, I learned he was the man who created McDonalds. But it turns out that isn’t quite true. While Kroc is a major reason why McDonalds is a giant fast-food corporation today, the forgotten tale of the original men who wore the McDonald name is even more fascinating and undeniably tragic.

Director John Lee Hancock (“Saving Mr. Banks”) returns to cook and serve us this buried story in the biographical drama, The Founder, which is all about the ramifications of ambition. Michael Keaton (“Spotlight”) stars as Ray Kroc, a struggling salesman, who gets a life-changing phone call from Dick and Mac McDonald (Nick Offerman, “Me and Earl and the Dying Girl” and John Carroll Lynch, “Ted 2”), two Californian brothers who sell hamburgers and make great milkshakes. As Kroc learns the meticulous process of how they produce high quality fast-food, his hope was to replicate that genius for the global masses. But the question for him and the film’s plot circles back to: “At what cost?”

Keaton plays Kroc as a seemingly decent man we can all relate to: A hard-working guy who hasn’t reaped the benefits of his labor. And although, Keaton’s appealing presence is the driving force of the story, he does not have the best performance. That title belongs to Nick Offerman as the perceptive half of the McDonald brothers, Dick. Offerman’s sincere portrayal of a quiet, understated man with integrity brings more magnetism than any other character in the film. And this happened because of how the story positions itself, which simultaneously helps and hurts its overall storyline.

By building its narrative around Kroc, it gives Keaton the perfect platform to run in the best actor nominee race for this current awards season. Unfortunately, he didn’t get it. And that’s not due to Keaton’s performance, but what the film deprives him of exploring. Sure, it’s cool to see Kroc’s plans (innovative and dastardly) during the meteoric rise of McDonalds during the 1960’s to the company we know today. But just as Kroc got inspired by how the McDonald brothers ran their operation, we need to see what sparks the heart of this aloof businessman.

This character dynamic not only reveals itself in his work, but more importantly, in his personal life. This sector primarily revolves around the film’s two female leads: Laura Dern (“The Master”) who plays his supportive but ultimately wronged wife Ethel, and Linda Cardellini (“Avengers: Age of Ultron”), a woman with business smarts who catches Ray’s eye. However, by trying to avoid certain plot clichés, Hancock and scribe Robert D. Siegel (“The Wrestler”) assume The Founder is better served by just getting to the point. Instead, by glossing over these relationships, the film actually bypasses the true meat of the story. It also deprives these women of having great performances and being good foils to Kroc. By exploring this avenue further with as much originality as possible, we would witness a fuller picture of Kroc and his complexities.

Unfortunately, this great flaw in its storytelling keeps The Founder from being a great character study. Nonetheless, whether or not you like McDonalds, the story presented is a well acted, nourishing cautionary tale on adulteration. Not just on how and what we eat, but on what really matters most — the purity in the way we live our lives. 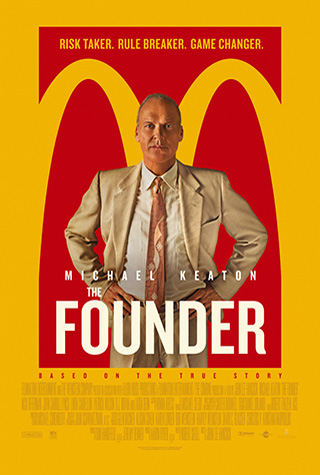