Like so many sequels, especially of comedy films, a serious drought of what made the first funny and charming takes place in Ted 2, forcing writers to substitute true laughs with obscenities (saying the “F” word over and over does not make it any more clever), crude jokes and, in this case, far too many scenes of the actors sitting around smoking pot.

There are sequences with bongs, joints and even fields of the dope, but none of it is even remotely interesting, unless one is high at the time of viewing. Sorry, I wasn’t, so I suppose I just didn’t get it. In fact, the only thing LESS funny than using marijuana is WATCHING someone ELSE use marijuana. Then again, I guess the higher one is, the funnier this picture might be.

That’s the main problem with Ted 2, the revisit of the surprise 2012 hit “Ted” with Mark Wahlberg (“Lone Survivor”) and “Family Guy” creator Seth MacFarlane, it just is not that funny. Hoping to get lightening to strike twice, these two (sans Mila Kunis) appear in another convoluted tale of the famous, profane teddy bear (voice of MacFarlane) who came to life via a wish by John Bennett (Wahlberg) in the first picture.

Here, Ted wants to marry his sluttish co-worker, Tami-Lynn (Jessica Barth, the ‘Pretty Blonde’ in “Next”). In one of the few humorous scenes, the wedding is officiated by Sam J. Jones (“Flash Gordon”), but there is no bliss here as the two fight (in most foul-mouthed and embarrassing ways) until only the suggestion of having a baby will keep them together.

Since Ted does not have, well, a male appendage, they try sperms donors, but Jones and Tom Brady are not very hip on the plan, so Ted and Tami-Lynn try an adoption agency. Unfortunately, this raises red flags with the state concerning Ted’s own status as a human and he is soon in court trying to show he is a person. Bumbling lawyer, Samantha (Amanda Seyfried, “In Time”), obviously cannot help and ends up only being eye candy and a tepid love interest for Wahlberg.

Then, in an attempt to corral a famed civil rights attorney (Morgan Freeman, “Now You See Me”) to head the appeal, the group gets into even more ridiculous situations (if that’s conceivable) on a road trip to New York and a session at Comic-Con. Another unnecessary holdover from the first movie, the crazed Donny (Giovanni Ribisi, “Selma”) arrives and brings the comedy level to a screeching halt, as does most everything else here, especially trying to associate Ted’s fight for personhood with the plight of blacks, gays and just about any other oppressed group in human history.

The only few real laughs include a scene with tough guy Liam Neeson (“Run All Night”) attempting to purchase Trix cereal (but worrying that since it’s “only for kids” he may get into trouble) and a send up of the trail on “Saturday Night Live” (which is much funnier that the actual show has been in several years), but not much after that.

Movie patrons, just save your money here and rent the original “Ted,” or even re-watch “Jurassic World” or “Inside Out” instead. You cannot do yourself any harm with any of these options and Ted 2 doesn’t stand a chance against any of them anyway. 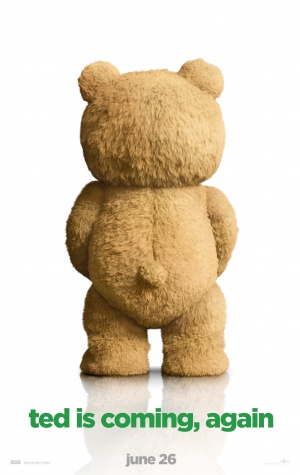