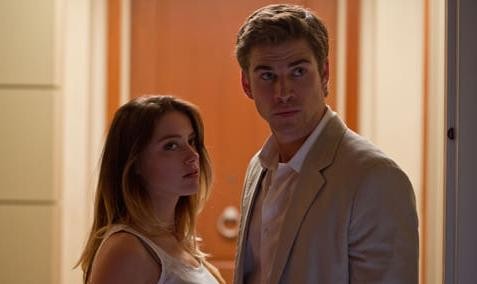 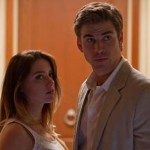 When one titles a film using a human emotion or condition (i.e., “Frantic” or “Frenzy” or “Psycho” or “Vertigo“), the bar needs to be set fairly high. In the case of Paranoia, however, that bar could not possibly get any lower. And despite starring several Academy Award-caliber performers (previous nominees Harrison Ford and Gary Oldman, as well as winner for 1977’s “The Goodbye Girl,” Richard Dreyfuss), this picture (directed by Robert Luketic, “Killers“) wastes that talent with an undercooked script that defies the viewer from finding anything near paranoid within the entire premise.

Using Liam Hemsworth (Thor’s little brother) in the lead is also a mistake. While he is certainly eye candy for the ladies, he is just too much of a lightweight at this point in his career to carry such a burden of emotional fragility throughout this endeavor. He is also completely out of his league with the three previously mentioned actors nor can he create a convincing or compelling love connection with co-star Amber Heard (“Syrup,” a film that supposedly made a little more than $600 at the box office).

Based on the Joseph Finder novel, here, Hemsworth is Adam Cassidy, a top-flight geek who toils at what passes as a modern technology firm, Wyatt Corp., creating new kinds of cellular phones with his equally geeky co-workers, mainly Kevin (Lucas Till, “Stoker“) and Allison (Angela Sarafyan, “The Twilight Saga: Breaking Dawn – Part 2“), all the while caring for his grumpy pappy (Richard Dreyfuss, looking more and more like Mr. Holland’s Old Puss with time).

When Adam and Co. decide to pitch an idea for a phone that can display things on a television set, Nicolas Wyatt (Oldman, fresh off his Oscar nod for “Tinker, Tailor, Soldier, Spy“) gets miffed and cans the lot of them. The gang then spends $16,000 from a corporate credit card at a night club (what?!), which then puts Adam in Wyatt’s debt. Threatened by a company thug, “Meechum ” (Julian McMahon, “Red,” think Wilford Brimley in “The Firm,” only not as frightening) into compliance, he is forced to become a spy and gather information on the firm of Jock Goddard (Harrison Ford, “42,” not only attempting the hairless Vin Diesel look, but trying to copy his acting style, as well). Conveniently, Adam is hired and immediately given almost unfettered access to all of Goddard’s secrets, including info on a cell phone that one can fold up like a wallet.

Even more conveniently, he beds Emma (Heard), who is also Goddard’s marketing or creative bigwig, or something like that. Honestly, it all gets pretty confusing, especially since Adam also designs a phone that can plant a GPS tracking device in someone’s e-mail (once again, I may be off here, considering Paranoia features flashes of technology that does not exist yet or might exist — who knows — and just expects us to go along with it without question). 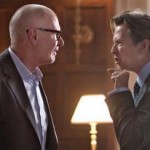 Nevertheless, the tension builds at a snail’s pace (“Turbo,” where are you when we need you?) while Adam gets a swanky new apartment and a corner office, goes to the Hamptons, makes love with Emma, runs from “Meechum,” is threatened by Wyatt, charmed by Goddard and sees Kevin run over by a car, among other things. Conclusion has the group trying to nail both company sharks and set them up for FBI intervention, while all I could ask was, “Hey, what happened to ‘Meechum’?”

With nothing new or original here, and plot “twists” that are telegraphed from a mile away, those who are impressed with flash and glitter and cell phones and night club scenes and slow, back-lit, obligatory love-making sequences will no doubt enjoy this movie. Anyone else, unfortunately, will have to watch one of the dozen or more better films this one rips off, including the goofy Michael J. Fox comedy, “The Secret of My Success,” which contains more corporate intrigue in any given scene than in one hour and 40 minutes of Paranoia. 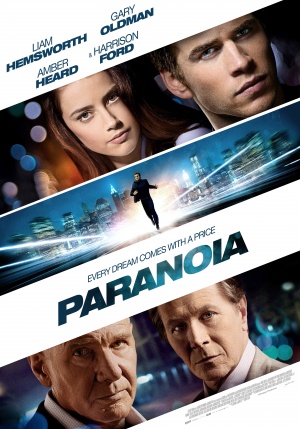