J.C. Chandor’s (“All Is Lost”) Amazonian heist thriller, Triple Frontier, has a stellar cast and equally impressive cinematography — as some of Hollywood’s most recognizable stars traverse South American rainforests and mountainous peaks to lift hundreds of millions of dollars off a local drug lord. While some of the narrative feels somewhat tired — as macho, A-Team-type action thrillers have long occupied studio schedules — it is director of photography Roman Vasyanov’s immersive scenes that set this film apart from scores of others. The visual component, coupled with Chandor and fellow scribe Mark Boal’s ambitious script, make for a worthy two hours.

The team draws on Pope’s meticulous preparation for the job and heads into the jungle, using the intelligence of Yovanna (Adria Arjona “The Belko Experiment”), a young woman who’d been forced into Lorea’s camp and seeks to flee the country. Under Redfly’s guidance, the team scopes out Lorea’s compound and strikes. The bulk of the film follows their multi-leg plan to flee the continent and deposit the drug money into offshore accounts.

Where Boal and Chandor’s dialogue lags — in flat exchanges between the war vets as they grapple with their middling nine-to-five jobs — both the director and Vasyanov make up for it in gritty scenery and a tense raid sequence. To the latter, compelling radio communication, soldierly planning and inner conflict make a “safe house” invasion scene quite memorable. Again, this is not groundbreaking cinematic territory; and while the film stumbles a bit out of the gate, it’s the harrowing escape and survival measures that give the movie its identity, as the ex-soldiers traverse the thick rainforest and 11,000-foot peaks.

In many ways, Triple Frontier steers clear of “Sicario”-like territory, instead venturing closer to a “Lone Survivor”-“Savages” hybrid. Chandor’s guidance seems to bring some nuance to the plot, plus a few of his characters — including Pope, Ironehad and Catfish. Affleck stands tall as the seasoned leader, a struggling Florida real estate agent, but elements of his role and demeanor also seem to clash. Pascal’s character feels too underused, falling beneath Redfly and Pope’s careful watch. Yet the helicopter pilot and all-around tough guy is perhaps the most dynamic of the group.

With a comfortable two-hour runtime, Triple Frontier is visually sprawling but narratively constricted — bound to age-old genre tropes. Despite the shackles, though, Chandor amasses a likable gang poised to bring unsanctioned justice to the lawless depths of South America. Moviegoers can forgive the dialogue lapses and perhaps even anticlimactic beats during the film’s loud exit from the drug den. That’s because the other filmmaking techniques and the believable cast add what we can call the engaging fourth frontier.

The film truly finds itself as the team inadvertently lands in a South American coca field. From that point on — and upward into the Andes — the film makes for top-rate viewing.

So, as an ensemble, the group is one to be reckoned with. At the helm, Chandor amplifies many elements of a familiar genre. Behind the lens, Vasyanov works magic. Altogether, these factors coalesce into a watchable heist thriller. Don’t expect an Oscar-worthy effort here, but for an option on a Friday night Netflix binge, give this one a shot. 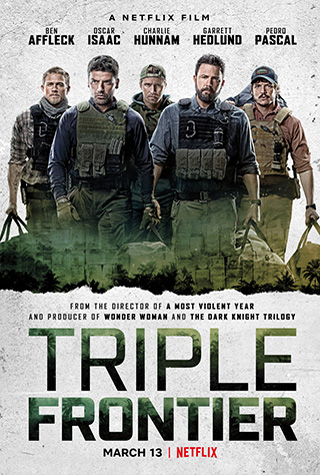