Set in post World War II Mississippi, Mudbound — based on Hillary Jordan’s Bellwether Prize-winning novel — tells the story of Henry and Laura McAllan, a white farming family, and Hap and Florence Jackson, the black sharecroppers who live on and work their land. Both families have — among other similarities and commonalities — relatives returning from and scarred by their wartime experiences, but this fact far from unites them. Of the novel, fellow author (and Bellwether founder) Barbara Kingsolver has said, “I love that you understand everybody, even though everybody isn’t right, and in the long run some people are very wrong. But you begin by feeling their own perspective, and you have some sympathy for every character.” Under Dee Rees’ assured direction, the film utilizes the book’s multi-narrative structure to maintain this empathetic balance and muddy the moral waters.

Voiceover accounts — and strong lead performances — on behalf of the six main characters punctuate the film, and there is plenty of story to tell as the narrative spans continents, generations and points of view. Despite, or maybe in spite of, the substantial subject matter, the film does not feel weighted down by these voiceovers. The passages are economically chosen and effectively used, distilling the narration to moving moments of interiority, which provide further insight into the characters’ psyches and their (often antagonistic) relationships with each other and this place in which they find themselves. There also exists a deftness to the editing and interesting symmetry in the narration and underlying montages. Hap Jackson (Rob Morgan, “Wetlands”) and Laura McAllan (Carey Mulligan, “Suffragette”) are particularly eloquent (and of different opinions) when speaking about their experiences in the muddy Mississippi Delta.

The film’s cinematic beauty and grandeur are presented in stark contrast with the daily horrors and violence accompanying country life in the Jim Crow south. In Laura’s mind, “violence is part and parcel of country life . . . my hands did these things, but I was never easy in my mind.” This tendency towards violence, and bifurcation of mind and body in committing such acts, haunts each chapter of the film. Ronsel Jackson (Jason Mitchell, “Straight Outta Compton”) and Jamie McAllan (Garrett Hedlund, “Pan”) risk life and limb fighting for their country, but the true depths of humanity’s horrors are not known until they return back home.

Mudbound is one of the year’s most captivating and difficult to watch films. It is a masterful showcase of the power of visually arresting imagery. Jordan’s novel is well-written and Dee Rees and Virgil Williams’ screenplay pulls the most moving passages directly from its pages. But the film’s true power comes from Rees’ vision of this world, as her wide angle shots frame the full scale of prejudice and injustice and reframe the larger issue of systemic racism that is as deeply rooted in this country as the McAllan’s cotton crop.

The characters’ association with the land are juxtaposed with an intimate portrayal of the relationships between parents and children, and more specifically the distinct betrayals perpetrated by both. The betrayals brought on by sons and brothers, husbands and wives are foregrounded amid the greater betrayal of an ungrateful country (and its countrymen) that allows a black man to risk his life for it and yet remains unwilling to recognize his humanity (or more than three-fifths of it) upon his return home. The film makes it clearer than mud that there is to be no hero’s return for Ronsel Jackson. Amid the film’s numerous deceptions, Rees remains true to the characters, her source material, and the cinematic form. Although, I may not have by streaming this film on Netflix and forsaking the full cinematic scale.

As of late, it has been impossible for me as a person and burgeoning cultural critic to separate the work from its larger cultural context. Likewise, one cannot separate this film from a larger conversation about the white entitlement and systemic racism that remains a muddy stain on this country’s history. As someone who was only betrayed by her country and the systems it upholds for the first time last November, perhaps for my own peace of mind or absolution, I desperately wanted the open to interpretation ending of Mudbound to amount to more than a fantastical representation of the American dream. During an early scene of Ronsel departing for the front-lines, Florence Jackson (Mary J. Blige, “Rock of Ages”) superstitiously narrates: “It’s bad luck to watch someone leave. It took all I had to not look back.” Ronsel, Hap and Florence carry that weight with them. They struggle with and desperately yearn to be the one who stays, the one who owns acreage and a stake in the land and their future. Those lines from early in the film take on new meaning during its final scenes as we watch Ronsel leave his home once more. The Jackson’s are looking forward now, but luck has nothing to do with it. 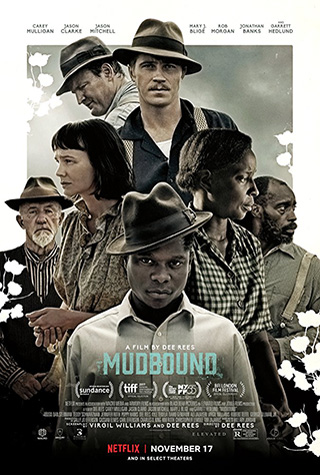