Chris Weitz, director of “American Pie” and co-writer on last year’s “The Mountain Between Us,” delivers a watchable and important effort in Operation Finale, depicting the capture and extradition of Holocaust mastermind Adolf Eichmann. It’s a well-intentioned take on one of the ugliest personalities of the 20th century. Yet, its middling characterization and preference for dialogue over plot progression often hold it back.

The historical drama is really more of a talker, yet there is a poignant second act of Matthew Orton’s screenplay that captures the manipulative, but nonetheless human, side of Eichmann (Ben Kingsley, who also depicted Itzhak Stern in Steven Spielberg’s “Schindler’s List”). The film is atmospheric and technically sound, especially in building the Argentine backdrop and burgeoning pro-fascist leanings in the country’s underground.

Even though the 74-year-old Kingsley plays a far younger former Nazi (who was 56 when he was executed in 1962), it is by no means a deal-breaker. Where the film teeters is in its genre confusion — the talker is more about Eichmann’s ultimate capitulation to the Israeli intelligence agency Mossad and security agents of Shin Bet than it is about the “catch and extract” elements.

Oscar Isaac (“Star Wars: The Last Jedi”) plays the film’s lead, the Mossad agent who captured Eichmann in Argentina, Peter Malkin. Isaac is effective as the tireless, still-grieving Israeli operative. Kingsley keeps viewers engaged as the bookish manipulator, and the cast is rounded out by stable performances from Mélanie Laurent (“Now You See Me”) as an Israeli doctor charged with sedating Eichmann; Michael Aronov (“The Drop”) as Zvi Aharoni, one of the Israeli interrogators in the safe house; and comedian Nick Kroll (“The House”), who takes a serious turn as one of the Shin Bet organizers of the capture, Rafi Eitan.

Operation Finale moves from Mossad headquarters to a suburb outside of Buenos Aires, and does so fluently. In these locales, Israeli agents are charged with extracting Eichmann — with the added endorsement of Prime Minster David Ben-Gurion (Simon Russell Beale, “The Death of Stalin”). Malkin and Aharoni are essentially the two set to strong-arm Eichmann into captivity, but they must contend with his shrewdness, a local gang with pro-Nazi leanings and inner conflict over their proximity to the notorious German exile. Their “hit squad” is brazen and certainly not forgetful, but Argentina’s political climate and their own slip-ups could mean Eichmann forever escapes justice.

Despite convincing performances, the ensemble cast weighs down the severity of the raid on Eichmann’s Argentine home. Outside of the secondary characters, the film also fails to visualize the horror of Eichmann’s reign — instead devoting dialogue to his claims of being a “cog in the killing machine,” bound to his desk 20 hours per day during the height and downfall of the Third Reich.

Flashbacks showing a younger Eichmann (Kingsley in SS garb) also fail to capture the raw emotion and depravity of his war crimes. He is shown placing a kerchief over his mouth amid the actions of his Nazi firing squad. Eichmann was, indeed, an architect of the Final Solution, which led to the murder of six million European Jews. These flashbacks or dialogue could’ve pointed to some of his more unforgivable actions.

Throughout his tenure in the Nazi party, Eichmann oversaw the deportation and extermination of Jews to ghettos and extermination camps. The Nazi was supposed to have said that he would “leap laughing into the graves” of the Holocaust victims. One for logistics, Eichmann took minutes in Reich department meetings on Jewish extermination, later asserting that he simply managed train schedules for the death camps. In his Israeli trial, Eichmann claimed to be a soldier in the Führerprinzip system, where what the Führer, Adolf Hitler, said was written law. Despite his claims, he was executed by hanging on June 1, 1962.

Where Operation Finale succeeds, and overwhelmingly, is in the close interaction between Eichmann as a captive and Malkin, whom he labels “Herr Captor.” Malkin addresses the unflappable Eichmann with equal wit and sincerity, ultimately pushing for a signature on a clearance document that would send the war criminal to stand trial in Israel. The camerawork in these scenes is intimate and elemental, with the lighting revealing the true disposition of each man.

Mid-operation scenes made to look suspenseful are not, and the cast lacks a palpable chemistry, but the attention to detail is precise and Weitz’s vision to define both vengeance and justice is clear.

Operation Finale is worth the watch, but comes off as more of a made-for-TV dramatization of heinous war crimes and their manipulative perpetrator. Those looking for “Schindler’s List”-type depth will leave the theater disappointed, although the movie does have a parting message: The Nazi officers were in fact living, breathing personalities that filled the ghastly, gray uniforms, each different in his adherence to grisly crimes and incisive plotting, but wholly equal in guilt. 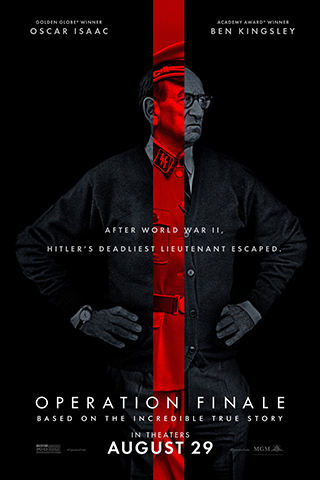