The Meg, the finally birthed form of a long-gestating adaptation of Steve Alten’s 1997 bestseller, has at least the first three ingredients in its formula, but it still bites.

What’s a giant shark movie to do? Director Jon Turteltaub (“Last Vegas”) sets the bar extremely low and still bonks his head on the way in. Apparently, having the screen’s largest shark to date and a fuzzy goal to make the audience both laugh and yelp is not enough to justify cutting corners and tossing them to a cheesy CGI monstrosity.

Turteltaub even has a workable slab of leading man granite in Jason Statham (“The Fate of the Furious”), whose cantankerous tough guy shtick still fits certain silly situations. And the core conceit, that scientists at a billion-dollar underwater research facility have discovered a penetrable hydrogen layer at the bottom of the Mariana Trench, is just concisely and easily ridiculous enough to open the door to some watery wonder.

A wink in the audience’s direction is quickly replaced by a gush of sentimentality, suggesting that Turteltaub can’t coherently clock his flick’s dramatic or comic timing. Some deaths intend to ironically elicit chuckles, while others practically come gift-wrapped with a complimentary box of Kleenex. It’s all just completely off, a rusty collection of overlapping pieces that have been assembled so soggily that the flick may as well have been edited underwater.

During some of the movie’s many Meg-less minutes, other traces of humor are found in little Meiying (Sophia Cai, “Somewhere Only We Know”), the young daughter of oceanographer and Statham’s love interest Suyin (Bingbing Li, “Resident Evil: Retribution”). Meiying tries to remain occupied while playing with her toys throughout the colossal research facility, but most of her scenes have her either in mortal danger or apparently auditioning for a part on “Kids Say the Darndest Things While Their Mom’s Future Boyfriend Hunts a Prehistoric Shark.”

The shtick gets old fast, but it remains indicative of the movie’s overarching problem: It’s soppily satisfied with being utterly unoriginal and ridiculously regurgitated. Sharksploitation movies are, by their very nature, regurgitation left in the wake of fin-tastic fish flick “Jaws,” but it’s nice when each new attempt, especially a rare expensive one like The Meg, has at least a hint of its own flavor.

All Turteltaub’s picture has is some tonal confusion and a visual style so flat that you’ll feel compelled to feed your useless 3D glasses that most screenings require to the digital shark on the big screen. There’s just no excuse for a movie this costly (if reports of a $150 million budget are accurate) to be this ugly and completely lacking in visual flair. Alexandre Aja’s similarly themed 2010 remake, “Piranha,” was much cheaper (a mere $24 million, supposedly), much gorier, and much clearer with its comic intentions.

The Meg is just a toothless take on the “don’t go in the water!” subgenre, one that’s been significantly run down by its long swim through Hollywood’s development hell. What we’re seeing on screen is probably the entrails of the project’s many iterations or perhaps this lame effort that bobs between humor and treacle is simply the version that everyone could agree on, so inoffensive and uninspired as to leave everyone shrugging their shoulders indifferently.

Whatever the case may be, this is the Meg we’re stuck with. It’s not fit for bargain bin chum. An expensive shark movie anchored by an experienced action star shouldn’t struggle this pitifully to generate a mere whiff of salty entertainment. The Meg feels like two hours of casually treading water in a shallow pool, made to look incomprehensibly difficult. Put some effort in, giant shark! Millions of years spent evading extinction and this is the best you’ve got? Apparently, some prehistoric fish make for a fresher fossil than a film. 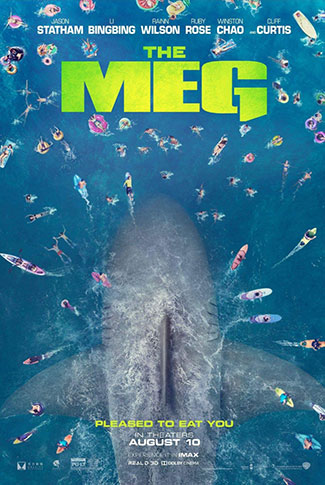