Tonal balance can be an esoteric, intangible concept: An alchemy of ingredients which depends upon a fluency in film language, particularly when attempting to combine ostensibly conflicting elements. Comedy-horror films rarely get the balance right, and in this Age of Meta it’s arguably even more difficult. Blessed with an intriguing setting, but cursed with a lack of internal consistency and logic, Blood Fest fails on most levels.

One night, a young Dax and his mom are watching Bela Lugosi’s “Dracula.” Mom goes into the kitchen and is murdered by one of Dax’s father’s psychiatric patients. Jump forward ten years and Dax (Robbie Kay, “Once Upon a Time” TV series) is regular teen working on a video store. He plans to go to Blood Fest, a huge celebration of horror. His father, Dr. Conway (Tate Donovan, “Argo”), won’t have it. The doc hates horror, blaming it for his wife’s murder.

Hold up a second. It’s understandable that Dr. Conway would be averse to violence. But to dismiss all horror fans — of which his son is one — as mere “freaks and degenerates” seems implausible when you consider that he is (seemingly) a psychiatrist with enough respect and talent to be invited to a prime-time TV interview. There’s a sound psychological underpinning to his character somewhere, yet he’s speaking with dribbling religious fervor.

Defiant Dax goes to Blood Fest anyway. His festival buddies are the proudly nerdy and secretly virginal Krill (Jacob Batalon, “Spider-Man: Homecoming”) and a charisma-free tomboy named Sam (Seychelle Gabriel, “The Last Airbender”). Tagging along is Ashley (Barbara Dunkelman, “Lazer Team”), an airhead who Krill regards as the most likely to satisfy his desire to get laid during the trip. “She refused to watch ‘Se7en’ because she missed the first six!” is a decent line, but it also underlines the cliché of the hot chick who settles for the dork because she’s too dumb and shallow to deserve a decent stud. Ashley’s Disney obsession is a quirk that exists purely to shoehorn in an awkward cameo from Zachary Levi (“Tangled”).

For the festival itself, director Owen Egerton does a decent job of depicting a bustling atmosphere on a limited budget. Subtle CGI is employed for crane shots, and the ground level scenes have good energy. However, the lack of licensing seriously limits our sense of immersion. Forget Shatner masks and Chuckie dolls — name-dropping is as far as Blood Fest can go. Dax may pray to George Romero instead of God, but visual horror motifs are conspicuous by their absence.

Suffice to say, the festival turns into a genuine bloodbath, and Dax and his newfound troupe — now including a reluctant horror writer named Hinckley (Chris Doubek, “White Reindeer”) — must traverse the various themed zones and fight their way out of the compound, encountering along the way a familiar crowd of zombies, psycho clowns, lusty vampires and horror novel supervillains. Together they are careering toward a plot twist which is only surprising because it makes no sense.

Which brings us to the film’s most violent battleground: Its irreconcilable narrative contradictions, inconsistencies and lack of logic. With whoops of excitement, these bona-fide horror fans dive eagerly into the festival, which is depicted as a hellscape of logo t-shirts and mass-produced tat. Moments later, the MC (Egerton himself) opens the festival by lamenting how consumerism has ruined the horror genre. From the frenzied reaction of the crowd, it’s not clear whether this a juxtaposition designed as an ironic allusion to the state of modern horror or simple wish fulfillment.

The MC goes on to talk about “making horror scary again” — a claim that dovetails with Dax’s constant references to “The Thing” or “Friday the 13th” or “Halloween.” Yet this promise is followed by a steady procession of in-jokes, self-references and digitally-enhanced gore, representing some of the worst impulses of modern mainstream horror. Blood Fest is harking back to classic late-century horror in the most superficial way, crucially forgetting that those movies had a hermetic self-seriousness which enabled them to be witty, camp and scary. It couldn’t be further from its stated touchstones. It’s closer in tone to something like Ruben Fleischer’s “Zombieland.” Except, like a ’90s crime comedy desperately aping the dialogue of Tarantino, it’s a bad piece of mimicry, therefore it comes off as mockery.

It’s a minor spoiler to reveal that the MC is the prominent bad guy of the piece: The puppeteer controlling the whole operation. He’s a wacky, cackling overlord with all the menace of a Saturday morning cartoon. But one must respect the sway he holds over his minions. He’s convinced a whole room full of people that the remote-controlled ghouls they’re commanding are merely avatars in a video game. Heck, some of his staff are openly aware of his genocide, and allegedly opposed to it, but go along with it anyway. Every employee, it seems, is a mildly reluctant mass-murderer.

As for Dax and his chums, there is a half-assed notion that they must follow the “rules” of horror in order to survive. But the conceit doesn’t extend beyond the occasional cry of “You never go upstairs in a horror movie!” The rest of the time they’re just winging it. There’s certainly no evidence of a cine-literate masterplan. Indeed, the ultimate mastermind overseeing everything is self-confessedly unaware of genre tropes, so survival by rule-following is nonsensical anyway.

Egerton is clearly aware of such tropes, but that knowledge doesn’t translate into a horror-comedy which is either scary or funny. The lack of tension-building is palpable, even risible at times. Mild horror moments are punctuated with far too many forced emotional beats and comical responses, undermining any sense of danger or desperation. It seems that for every half-decent idea Egerton has, he has a knack for undermining it. The result is mixed at best — and perhaps most damningly, true horror fans like Dax are least likely to enjoy it. 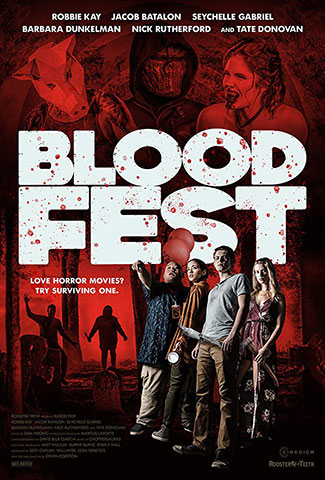