Lives online, lives offline. Activities that only happen because web cameras connect us to an anonymous multitude. What happens online may stay online, or overlap with the “real world.” What happens when a person is one thing on the Internet and another in the outside world? The questions around such alternative lives are pressing concerns in our current digital age, and make for prime dramatic material. In the case of Searching, director Aneesh Chaganty presents these lives and indeed their investigation through the digital devices that record lives. Throughout the film, the frame is filled with the display of computers, while all persons displayed are captured within web cameras, the footage of which is double mediated when the viewer sees them. The film’s conceit sets the stage for a journey into digital identities, footprints and indeed lives.

The conceit of Searching is not unique, having been used previously in “Unfriended,” “Friend Request” and “Unfriended: Dark Web.” Unlike these horror films that point to something malevolent or even supernatural on the World Wide Web, Searching takes the digital capture sub-genre (other labels are available) in a different direction.

The narrative of the film is a missing person thriller, as father David Kim (John Cho, “Columbus”) searches for his daughter Margot (Michelle La). Following Margot’s disappearance, the only traces that remain are digital. The film frame presents FaceTime, text and chats, video websites, traffic and surveillance cameras and the screens of several computers where the windows of various applications compete for space. This competition emphasizes the crowding of digital information, just how much there is and how dizzying it can be, as well as the level of exposure involved in going online. The early part of the film documents Margot’s life as captured and contained in computers. This charting of the technological development is interesting and somewhat nostalgic, and provides creative product placement for Microsoft, Apple, Google, Facebook and other names that have become as familiar as Mercedes, Coca-Cola and McDonalds. Margot’s life, from birth, through school, piano lessons, friendships and more is steadily charted and recorded through different devices. This history of a life, touched with major developments, including tragedy and triumph, is moving and affecting, as it shows the benefits of regular documentation in maintaining memories both sweet and bitter. Digital capture often receives a negative press, but Searching suggests that there is genuine experience and affection within digital capture.

This aspect of the film is the most interesting, and later scenes in which David reviews his daughter’s life on and offline are moving and even verge on the heartbreaking. The film’s style allows for a probing meditation on different identities, the facilities granted by the Internet and the dangers involved. Indeed, the film is almost essayistic in its limited presentation, as while the screens are multiple they are never omnipresent and no application provides the full story. What David and, by extension, the viewer sees, is inherently incomplete, and these limitations prompt questions about what lies beyond the frame, where the film’s world goes and what we are missing.

This investigation into identity and our relationship with technology is somewhat undermined by the film’s thriller narrative. On its own, the thriller narrative works: David’s increasing desperation as he learns more about Margot’s life and how this may have contributed to her disappearance is affecting. The relationships between David and his brother Peter (Joseph Lee, “Miracle That We Met” TV series) as well as Detective Vick (Debra Messing, “Like Sunday, Like Rain”) are convincing. However, the format does start to jar as the film progresses.

Every revelation is either found on Margot’s computer, or revealed in a conversation via video chat, text or e-mail, or on the phone when the web cam just happened to be left on. These developments smack of convenient artifice which jars with the mundanity the film struggles to present through its limited window(s). This problem is exacerbated as important information is recorded on devices that are always close to hand, ready to use and have reception. While narrative conveniences are nothing new, the insistence on only presenting what appears on the diegetic screens detracts from the everyday presentation of the characters. Some of this omnipresent IT is explained by the film being set in Silicon Valley and all of David’s work being contained in his laptop, but Chaganty incorporates multiple forms of communication that cumulatively become too convenient. This again feels like events are geared towards the necessity of capturing EVERYTHING on a single computer, and the effect is more than a little grating.

On the positive side, the family tensions and responsibilities are engaging and palpable, especially that between David and Peter as it provides an emotional arc across the film. Neither character is perfect and revelations about both of them lead to suspicion and tense confrontations. Furthermore, in a year that also features the box office success “Crazy Rich Asians,” the Asian-American family at the center of Searching feels progressive and inclusive (although mental health gets a less encouraging depiction). There are hints about online dangers and opportunities, all of which give the film a sense of heart and coming from the right place. Ultimately the story is compelling and the telling innovative, but the problem is that these two elements are not persuasively linked. As a result, the film is intriguing and at times compelling, but it ultimately feels rather gimmicky. 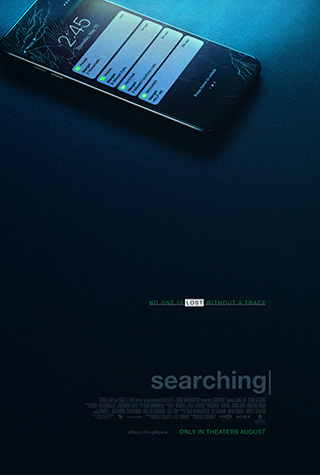