Jurassic World: Fallen Kingdom is, for lack of a kinder way of saying it, a prehistoric mess. Nestled between a passable 2015 sequel and a bookend to the trilogy coming in 2021, it is sloppy staging for what’s sure to be an underwhelming and anticlimactic third effort.

Largely dispensable characters quickly scour the island in a dinosaur rescue effort gone awry, and then get holed up in a secret dino lab. The stakes are never truly defined, the wider premise is laughable (weaponized dinosaurs in an age of missile guidance?) and the overt nods to Spielberg’s first two adaptations of Michael Crichton’s writings are more off-putting than constructive. It’s almost as if this outing is the genetically mutated offspring of the lowest moments from “Jurassic Park”: Joe Johnston’s “Jurassic Park III” and the comical Tyrannosaurus (T-Rex) blitz through San Diego in “The Lost World: Jurassic Park.”

The film picks up three years after the tragic (but largely predictable) events at the Jurassic World theme park. The grounds are overrun and the dinosaurs are still foraging and forming their own contained ecosystem. As luck would have it, the island was built on a long-dormant volcano that is now set to erupt and exterminate the remaining dinosaurs.

Enter Benjamin Lockwood (James Cromwell, “Marshall”), supposedly John Hammond’s (Richard Attenborough) partner in early genetic pioneering. Lockwood has his lackey, Eli Mills (Rafe Spall, “The Ritual”), recruit Dearing, now a dinosaur rights activist, to reenter park systems to “save” the dinosaurs. She’ll be joined by Grady, whose animal behavioral background will allow him to corral a surviving velociraptor. Much like the InGen operators in “The Lost World” (recall John Hammond’s nephew Peter Ludlow?), Mills’ intentions are not pure, and neither are the mercenaries he’s sent to the island alongside our trusty protagonists.

As the film moves from Isla Nublar to the Lockwood estate in California, the pacing gets skewed, the plot lifeless and the minor characters become cardboard cutouts. The main question: Can Owen and Claire save this batch of dinosaurs before they are leveraged for darker purposes? There is, of course, a more prophetic discussion here about genetics and technological prowess. Still, it doesn’t come to fruition and really gets lost in a hazy world of animatronics and monster mayhem. Where Spielberg used his dinosaurs to underscore scale and morality, Bayona, and more importantly the screenwriters, do so to service a two-dimensional plot.

To juxtapose this further, Spielberg’s well-rounded cast of characters each had roles to play in the moral dispute — from Sam Neill’s Alan Grant, to Bob Peck’s Robert Muldoon, to Jeff Goldblum’s Ian Malcolm (who incidentally makes a return here). In Jurassic World: Fallen Kingdom, the dialogue is surface-level only and does not service the narrative. While IT tech Franklin Webb (Justice Smith, “Paper Towns”) provides comedic relief, after a short while he’s simply irritating.

To be sure, this iteration is the franchise’s fifth film; the novelty is gone. That still shouldn’t be an excuse for sloppy storytelling or devaluing the original. The 1993 smash hit was an escapist film at its core, but it was also academic, as needed. Jurassic World: Fallen Kingdom, on the other hand, pales in comparison. In fact it seems amateurish.

Where these films need to succeed — outside of filling seats after numerous trailers with deafening T-Rex screams — is in the ingenuity. The answer may in fact be the construction of another park, and the ensuing existential baggage, but in a different exotic setting, with apocalyptic implications. The solution cannot be an “Indoraptor” or the “Indominus rex” and needless basement violence.

While Bayona brings some flashy camerawork to the table, the film simply lacks the same narrative through-line, urgency and flare of the original. The “expeditionary” segments of Jurassic World: Fallen Kingdom (captured nicely in both 1993 and the 1997 sequel) consume only minutes of screen time. Plus, Goldblum (“Thor: Ragnarok”) is criminally underused in his Dr. Malcolm cameo, and Toby Jones (“Morgan”) is clearly miscast as tough-guy auctioneer Gunnar Eversol. These are just a few of the film’s other many problems.

Fans of the franchise can only hope that the dino-chronicles come to a mediocre conclusion in the 2021 wrap-up. That, unfortunately, is where the bar’s been set. However, as the “Jurassic Park” franchise fizzles out, the emergence of smart studio-backed sci-fi films like “Annihilation” and “Arrival” should provide much-needed optimism in a cinematic world that’s leaned all too long on cheap thrills or superfluous CGI. 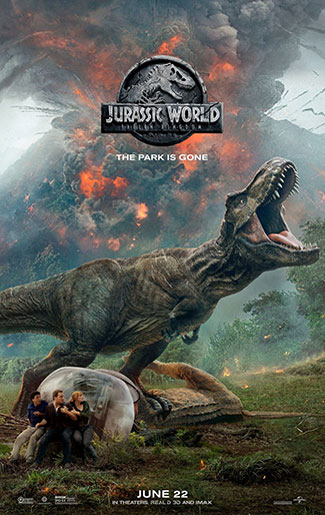