James Brown. Jackie Robinson. Thurgood Marshall. Besides being brilliant black pioneers in their respected careers, what do they have in common? They were all played by the same rising young Hollywood actor: Chadwick Boseman (“Gods of Egypt”). His name may not ring a bell since most of his movies haven’t exactly been major box office successes, however, this time next year that should change when he returns to the Marvel universe in “Black Panther.” For now, with Marshall, Boseman again tries to showcase his Oscar potential by portraying legendary Supreme Court Justice Thurgood Marshall.

With decent poise, Boseman plays a younger Marshall, the NAACP’s top lawyer who travels the country whenever there is an unjust incrimination against people of color. If this reminds you of the workings of a real-life superhero, you’re not mistaken. The metaphorical sentiment of the film is clear: Director Reginald Hudlin, who splashed on the scene with “House Party” in 1990, wants viewers to see Thurgood Marshall as “The Black Superman,” ready to rip out a giant letter “M” on his chest whenever injustice is near.

Unlike the understated persona of Jackie Robinson in “42,” Marshall gifts Boseman a character who speaks his mind and flexes some legal muscles in the courtroom. Unfortunately, Boseman doesn’t yet have the range to command the screen as a truly captivating figure from scene to scene. Although he tries to be stoic with great earnestness, his performance doesn’t come off as effortlessly. Because of this, Boseman is outshined by the amazingly nuanced Sterling K. Brown (“Righteous Kill”) who plays Joseph Spell, a meek chauffeur falsely accused of rape by his white employer (Kate Hudson, “Deepwater Horizon”), whom Marshall is asked to help represent at the behest of lead counsel Sam Friedman (Josh Gad, “Pixels”).

While Brown is the most talented actor in the cast, acclaimed veteran actor James Cromwell (“The Artist”) gives him a run-for-his-money with a solid supporting performance as one of the film’s antagonists, Judge Foster. Marshall’s chief (but narratively bland) rival is Loren Willis (Dan Stevens, “The Man Who Invented Christmas”) who is responsible for prosecuting Spell. Hudson, as the troubled accuser, is pivotal to the film’s mysterious plot although her screen time is limited. As for Gad, he continues to be type-casted as Hollywood’s goofy side-kick maestro. Regrettably, his few amusing moments aren’t enough to breathe life into the film’s dry and at times dull pacing.

It also doesn’t help that the plot for Marshall is essentially equivalent to a standard “Law & Order: Special Victims Unit” episode. However, since the life of Thurgood Marshall is new to the big screen (and most likely to most Americans), it is a huge and daring risk to explore a time before his more publicly known achievements. Hudlin and his filmmaking team are giving viewers a superhero origin story which is a truly interesting concept and worth applauding, but the film falters its own potential by not being the best story it could be. The case Marshall accepts toward the film’s end felt far more intriguing than the one chronicled. That’s not to say that the main storyline doesn’t have enough at stake (a man’s life is certainly important), but it lacks weight in its other narrative elements to keep one fully engaged for its 118 minute runtime.

Nevertheless, Reginald Hudlin is expanding a brand that will not and should not go away: Cinematic stories of the African American experience. Marshall, flaws and all, is another stepping stone to help advance this narrative movement. And while there are many great tales that still need to be told, three is enough — Chadwick Boseman should not play in them all. 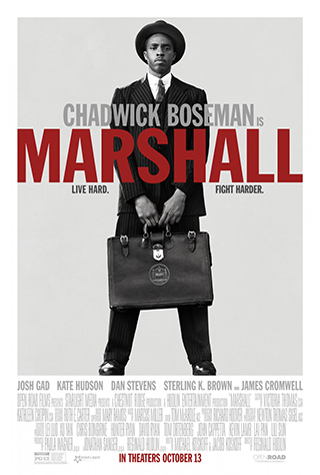