In 1960, primatologist Jane Goodall, the 26-year-old secretary of paleontologist Louis Leakey, was chosen to conduct research in Africa for his study of the influence of apes on primitive man. Though she was not a scientist and never attended university, her open mind, love of animals, and the strong support she received from her mother (who accompanied her to Africa) influenced his choice, one that turned out to be a very wise and important one. Reconstructed from over 100 hours of footage shot by nature photographer Hugo van Lavick, Jane Goodall’s life is brought to the screen in the riveting documentary simply called Jane.

Directed by Brett Morgen (“Cobain: Montage of Heck”), the film, which combines recent interviews with Jane, now 83, with the archival footage only discovered in 2014, transports us to the Gombe Stream National Park in Northwestern Tanzania, shortly before the country gained its independence from Britain in 1961. As narrated by Goodall from an audio recording of her 1999 book “Reason for Hope: A Spiritual Journey,” we witness Jane’s groundbreaking research into the behavior of chimpanzees in their natural environment, research that was initially questioned by the entrenched scientific community who said that her findings could not be taken seriously because she was a woman and lacked adequate training.

The first person to observe chimpanzees in the wild, Jane was forced to keep her distance until the animals could accept the presence of the “white ape.” Supported by the cinematography of Ellen Kuras and a moving score by Philip Glass, we see a silent Jane searching for observation points in the immaculate solitude of the mountains she grew to love. It was a process that required patience and fearlessness, which Jane tells us came from the fact that she did not know enough to be afraid. Her first important breakthrough occurred when she observed Greybeard, the oldest male chimp, using a twig tool to dig out termites from a brush. The discovery was contrary to the consensus opinion that only humans could use tools and was met with resistance, especially by religious groups.

Though we now know that chimpanzees are among the most intelligent primates and that there is 99% identical DNA between human beings and chimpanzees, the media reported the story of Jane’s accomplishments with the usual skepticism. Citing the fact that she gave the animals names instead of numbers, they asserted that it showed her tendency to anthropomorphize them and to over identify with the subjects she was researching. In spite of the critics, Jane received a grant from National Geographic to continue her work and, though she was initially resistant to the idea, they also sent her a Dutch filmmaker, Hugo van Lavick, to record her work on film.

Developing a relationship with Hugo, they eventually married and gave birth to a son they named Grub. It was Jane’s observation of the bond between Flo, an older female, and her baby Flint that provided her with some lessons in child rearing, though the bond between Flo and Flint did not end happily. In one troubling incident, after the chimpanzees began to steal bananas from their tent, Jane and Hugo began to supply them to the chimps, hoping this would prevent a more aggressive intrusion. It was a decision that had to be rethought, however, when the animals invaded their tent and stole everything they could get their hands on.

Even more distressing was an outbreak of polio among the community and the civil war that broke out between two factions of chimpanzees after the death of one of their maternal leaders, lending irony to Jane’s assertion that, “The more I learned the more I realized how much like us they were.” Unfortunately, Jane and Hugo began to drift apart when he lost the funding for his work in Gombe and left to photograph wild animals on the Serengeti Plain in Northern Tanzania, one of the natural wonders of the world.

Now designated as an engendered species, chimpanzees have already disappeared from four African countries, and are nearing extinction in many others. Millions of chimpanzees used to live throughout equatorial Africa, but today there are only 220,000 left in the world, a sad reminder of the increasing degradation of our planet. Thanks to The Jane Goodall Institute, an organization she founded that is dedicated to conservation, Jane has become an activist, traveling around the world talking about the need to protect endangered species, climate change, and the environment, attempting to build, in Werner Erhard’s phrase, “a world that works for everyone.” 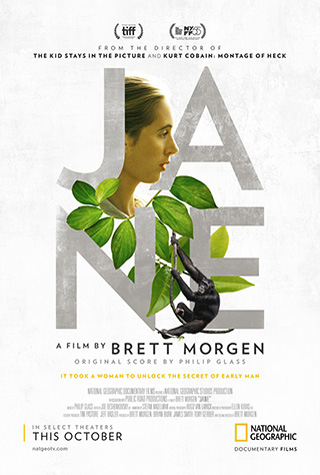