In Chinese culture, the number three is considered lucky for its similarity to the character meaning “life” or “to give birth.” As such, Mountains May Depart makes no small use of significant triptychs in telling its story. The film is segmented into three disparate chapters and time periods; its three main characters are caught up in a love triangle; and the audience encounters the main character, Tao, during three important stages in her life: Birth, marriage and death. The first and last of which are not her own, but nevertheless shape her experiences and determine the trajectory of her life.

The latest offering from acclaimed Chinese filmmaker Zhangke Jia is set in Fenyang, a northern coal mining city and the director’s hometown. The first of three chapters opens in 1999 with the excitement and uncertainty of the new millennium looming over the characters and China at large. 18-year-old Tao (Jia’s wife and muse, Tao Zhao, “A Touch of Sin”) is torn between two suitors: The quiet and attentive coal miner Liangzi (Jing Dong Liang, “Platform”) and the flashy entrepreneur Zhang (Yi Zhang, “Blood of Youth”). Despite poor writing and unconvincing performances in these early scenes, this love triangle is beautifully (and literally) set up in the film’s most well-composed shot of the threesome setting off fireworks along the bank of the Yellow River. Tao sees right through Zhang’s bravado, but cannot resist the promise of a better, more financially secure life. Humiliated, Liangzi leaves town.

These scenes, shot much earlier than the rest of the film, do not successfully stake emotional investment in the characters or their coupling. The unsteady camerawork, interrupted by interstitials of Chinese daily life, distracts from the main story instead of adding context. The sound design and background noises drown out the dialogue, which is fortunately subtitled.

The second chapter skips ahead fifteen years to 2014. Liangzi, diagnosed with cancer after years spent in the mines, returns to his hometown with his wife and child. Desperate to pay for medical treatment, he borrows money from Tao, who is now divorced from Zhang yet retains his wealth and social status. Tao and Zhang’s eight-year-old son, Dollar (Zishan Rong, “End of Summer”), lives with his father and stepmother in Shanghai. A family funeral reunites her and her son for a few days. This second chapter is more cohesive and coherent, effectively telling the story of a mother coping without her son. In 1999, Tao made her choice seemingly based on which man could provide the life she envisioned for herself. In 2014, she is grappling with the consequences of that decision and what it means to find herself living a life she has no wish to lead.

One of the most conspicuous and ambitious stylistic elements of Mountains May Depart is the changing aspect ratio. The first chapter is shot in letterbox 4:3 ratio, the second in the contemporary standard 16:9, and the last in widescreen format. This constant widening of the aspect ratio reflects not only the globalization of Chinese society and the characters’ emigration from their birthplaces, but also the more essential experience of change as it corresponds to human existence. Perhaps signaling to the ultimate price of technological advancements and modern globalization, the film’s scope and perspective broadens with each subsequent time jump and thus loses focus. Another unconventional feature is how conversations are filmed. The director repeatedly frames only one participant in the conversation, leaving the other party out altogether, as if to show just how poorly the characters communicate with one another. In later chapters, the characters are more communicative and likewise shot that way.

The final chapter is set in Australia in the near-future that looks much like our present, save for a couple new tech devices. In 2025, while driving in a car with his teacher, with whom he is becoming romantically involved despite her being closer in age to this mother, Dollar (now played by Zijian Dong, “Hide and Seek”) experiences a sense of déjà vu — the effect of having “lived this moment before.” She remarks that “life does repeat itself.” For as much as things change (mountains depart, cultures shift, modernization happens, people get divorced, and they die), life has a funny way of repeating itself. This crux of the film is thematically reinforced by recurring musical cues, symbolic sets of keys, and use of the color red (also a sign of good luck). One such musical cue is “Go West” covered by the Pet Shop Boys, an anthem ironically promoting western migration and ideals. The song opens with sounds of seagulls squawking and waves crashing. Sounds that are inexplicability echoed throughout the film (until the significance of which is finally revealed in the third act). For all the film’s flaws and miscalculations, its final scene — with callbacks to earlier scenes and experiences — shares wonderful symmetry with the opening one. Mountains May Depart is rarely subtle, but oftentimes obvious symbols can still hit the right emotional note.

'Movie Review: Mountains May Depart (2015)' has no comments 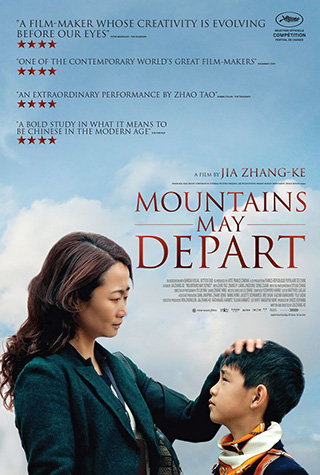