Mahal (Kelly Lou Dennis, “Three Tutus and a Gun”) is an aswang, an ancient race of vampires derived from Philippine folklore. But that aspect of her being is deeply repressed, and her role in present-day San Francisco is to be a member of an elite vampire-hunter squad. Mahal’s mission is to track down and kill Bampinay (Aureen Almario), a recent Asian immigrant — and an aswang herself — who is stalking the streets at night, slaughtering male politicians.

Mahal’s encounter with Bampinay does not go to plan. Bampinay takes mercy on her would-be assassin, and dedicates herself to unleashing Mahal’s forgotten vampire heritage — and using that hitherto untapped power to help Mahal avenge her father’s death.

Vampariah opens with a somewhat overwhelming voiceover explaining the backstory of the aswang, over the top of incomprehensible vampire-hunting footage, almost all of which constitutes the film’s trailer. It looks like a ’90s music video, and doesn’t bode well. But while this introduction may be papering over the cracks in the storytelling, ultimately it’s for the best because it gets some vital world-building out of the way swiftly and cheaply.

The central premise for the two empowered female leads is decent enough, with both Mahal and Bampinay wreaking not just personal revenge, but also striking back at misogyny more broadly (personified by Kilmore’s conflicted hatred and lust for Mahal). In terms of representation, men get a pretty raw deal generally, with the exception of computer whiz “Hack Daddy” (Roberto Divina, “Prophecy of Eve”), who is the Oracle to Mahal’s Batman.

There is a refreshing sense of minority representation throughout Vampariah — it is unusual to see so many Asian-Americans together on screen. Coupled with the revelation that the aswang were once a peaceful people, historically demonized by the march of Christian supremacy, and we see a faint reflection of some of the uglier prevailing ideologies in modern American society.

In the lead role, Dennis is as wooden as Van Helsing’s stake; and as her more mystical counterpart, Almario isn’t much better. But this is not the cinema (like it would ever see the inside of a cinema) of nuance — the best we can hope for is exciting action, good humor and some crazy ideas. Two out of three ain’t bad since the action is junk. Poorly edited, boringly choreographed and lacking any kind of weight, the fight scenes look like rehearsals. And the airborne battles, rendered in lame CG, fare even worse.

Airborne battles, you say? Yes, there is an inherent absurdity to Vampariah, which is fully embraced. This is necessary in a film where the main creature sprouts wings and leaves its own legs standing on the ground while it fights. (There’s a lovely moment when Bampinay is scooting around the room on a wheeled office chair). The aswang attacks with an extendable tongue, which can disembowel a lascivious politician with a single lick. And Mahal even has a wand for warding off the undead, which appears to be a stick with paper tassels.

So, Vampariah possesses and abundance of ideas; and even if most of them are risible, it’s never boring. Anyone expecting Buffy levels of wit or imagination, though, should look elsewhere. There is a good deal of humor, albeit not very sophisticated, and mostly it’s at the expense of men. One character has a tattoo which he believes is his name in Chinese — yet the subtitles confirm it to mean “dumb ass.”

The film is cheap-looking, and the color-grading is a murky mess, but Abaya at least makes an effort to keep things visually vibrant. There’s a fun scene when we learn of Bampinay’s childhood, and Abaya shoots it like a silhouetted puppet show. It’s only when things start moving — and the shock-and-awe editing really kicks in — that the visuals are distractingly poor.

The sound edit does not help either. At one point, Mahal breaks a window with her elbow and it sounds like a marshmallow landing on a pillow. Then there are the guns — unfortunately suffering from the VOD curse of superimposed muzzle flashes — which have all the impact of Pringles lids being popped. Foley artist, you have chosen . . . poorly.

Vampariah basically has the whiff of a cheapo TV pilot. At the end, Mahal even states that she’s ready for “the next level.” Best to leave it, I feel. But as it is, there’s something likeably overambitious about Abaya’s attempts at fashioning his world — something he achieves with a modicum of style and wit, whilst keeping the plot straightforward, and containing it all within 90 minutes. The result is mediocre, but endearingly so. 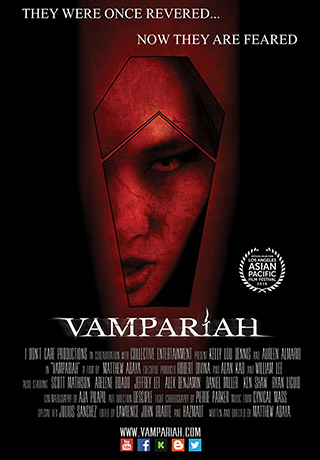