Matthew McConaughey (“Interstellar”) stars in Gold, a dreary rags-to-riches-to-rags-to-riches-to-rags tale directed by Stephen Gaghan (“Syriana”) that, while the Academy Award-winning actor (for “Dallas Buyers Club”) gives a passionate, above average performance (along with a perky Bryce Dallas Howard, “Pete’s Dragon”) in, the narrative of a 1980s mining company striking it rich is often muddled and uninvolving to the average viewer.

It’s 1981 and Ken Wells (McConaughey) is running his father’s (Craig T. Nelson, “Get Hard”) mining concern, but we jump cut seven years and he is down on the skids and an orphan if you will. Balding, pasty and flabby (in fact, he looks like Woody Harrelson in “Kingpin”), no one will use his services and he cannot even get old friends to return phone calls. Almost hitting rock bottom, even his loving wife, Kay (Howard), is growing tired of his drunken rages and little or no income from the declining company. Wells, though, has a dream that he discovers gold in Indonesia. However, with no money and prospects, this particular vision is likely to remain unfulfilled . . . that is until he meets Michael Acosta (Edgar Ramírez, “The Girl on the Train”), an engineer who finds a huge copper deposit, but has also fallen upon hard times.

Both sign a contract and while Wells goes back to New York to raise start-up funds (these scenes resemble “The Wolf of Wall Street” without the laughs), Acosta hires a group of natives (cannibals and headhunters, according to the script) to begin the drilling and exploration procedures. Of course, we know in movies like Gold, the plan will fail, but will ultimately be successful. Here, Wells contracts malaria and spends minutes writhing in a feverish stupor and when he comes out of it, everything is fine and the company has made the biggest gold strike in history.

Now, everyone is knocking on Wells’ door, begging to invest in his good fortune, especially the firm he was turned down by earlier and a big Wall Street conglomerate represented by Brian Woolf (Corey Stoll, “Ant-Man”). Even his wife claims that she has faith in him all along and the company stock goes public for $70 a share (twice what Facebook went for on its opening day).

With cash and amenities pouring in and with no end in sight, Wells spends like a cliché movie rich guy where money is no object, but, once again, we know he is bound to fall. At first, Wells turns down more than $300 million offered by Woolf’s firm, as well as a possible partnership with a holding company run by Mark Hancock (Bruce Greenwood, “Wildlike”) because his name was removed from the company and Kay leaves him after a blow up in a fancy hotel (he’s caught cheating, equating wealth and success with infidelity).

After this, the Indonesian military takes over the mine under orders from the country’s leader, Sukarna, but Wells and Acosta are fast enough on their feet to make a deal with the president’s prodigal son (suffice to say, a tiger and a Cadillac are involved) and the mining outfit is saved — for a while, anyway. During this sequence, Wells and Acosta are voted the “Golden Pickaxe,” from “Gold Diggers” magazine (stupid me, I had NO clue there was such an award or even such a magazine).

Later, Acosta comes under suspicion for suspicious behavior and once again gums up the works, leading to the convenient denouement. Like previously written, McConaughey and Howard are fine in their roles, and other than these two, there is really no compelling reason to waste time and money on this. Plus, while Ramírez gives adequate support, Gaghan’s direction is almost non-existent, as is the picture’s pacing, while the script from the pens of John Zinman and Patrick Massett (both responsible for “Lara Croft: Tomb Raider”) provides no comfort. And, as a product of the late 1980s, I expected a halfway decent soundtrack (sort of like “Adventureland”), but, alas, I was extremely disappointed in the depressing tunes that accompanied this feature.

Like another picture starring Matthew McConaughey, “Fool’s Gold,” very little about Gold shines and it will be quickly forgotten from the box office and the collective minds of the movie going public. 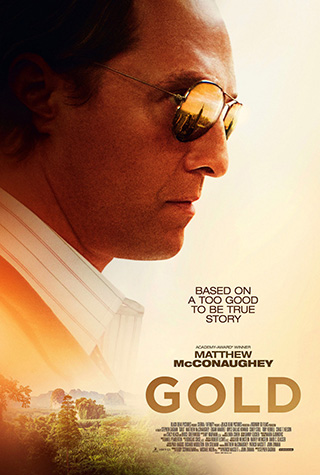