In his film “Of Gods and Men,” director Xavier Beauvois tells the story of seven Roman Catholic French Trappist monks kidnapped from their monastery in a village in Algeria by radical Islamists during the Algerian Civil War, and the sacrifices that people of good will in both religions were willing to make. Sacrifice is also a theme of Beauvois’ latest film, The Guardians (Les Gardiennes), his first film shot in digital. It is a superbly realized and emotionally engaging film that depicts the strength and courage of the women left behind during World War I when all able-bodied men were fighting in the trenches. A quiet, contemplative film, it is beautifully photographed by Caroline Champetier (“Holy Motors”) who captures the bucolic loveliness of the Limousin area of south central France.

Now part of the new region of Nouvelle-Aquitaine, it is the least populated region of Metropolitan France and most likely has not changed much since the years in which the film takes place. Based on a 1924 novel by war veteran Ernest Pérochon, Beauvois and his co-writers Frédérique Moreau and Marie-Julie Maille gradually reveal the impact of the war on one family whose two sons and son-in-law have left for the front. Supported by a moving score by Michel Legrand (“The Price of Fame”), the film covers a period of five years from 1915 to 1920, the years during and following the Great War in Europe, one that would claim an estimated 45 million military dead and wounded and 7.7 million missing or imprisoned.

The Guardians opens in 1915 in a combat zone where we see the bodies of dead soldiers lying in the mud. The scene abruptly shifts to the Paridier farm in France, a place of quiet beauty that stands in sharp contrast to the heartbreak of the battlefield. It is a difficult time for the farm which is run by widowed matriarch Hortense Sandrail (Nathalie Baye, “It’s Only the End of the World”) with the help of her daughter Solange (Baye’s real-life daughter Laura Smet, “Yves Saint-Laurent”) and her elderly father Henri (Gilbert Bonneau). Beauvois shows the heroism of the women furrowing, seeding, harvesting, grinding wheat and taking it to market. It is backbreaking work and will be years before combines and tractors are introduced.

As the men periodically return home on leave, it becomes clear that each of them is damaged in some way. Hortense’s oldest son Constant (Nicolas Giraud, “Taken”), a former schoolteacher, tells his mother that he endured, “two years of hell, some people went mad,” and says (without any evidence) that “after the war, it will be different.” Clovis (Olivier Rabourdin, “My Golden Days”), Solange’s husband drinks heavily and stands up for the humanity of the Germans (“they are just like us”) in opposition to the feelings of the family and the community. Finally, it is Hortense’s son Georges (Cyril Descours, “Red Sky”) who carries himself with a certain pride and even arrogance.

Frustrated by the need for another person to help her run the farm during the harvest season, Hortense hires Francine, a twenty-year-old auburn-haired orphan, remarkably performed by newcomer Iris Bry. In addition to the chores, Hortense must contend with some rowdy American soldiers stationed in the village awaiting their orders, while looking after Marguerite (Mathilde Viseux), Clovis’s daughter from his first marriage. Complications arise when Francine and George fall in love, much to the chagrin of the much younger Marguerite, assumed to be the girl that George would marry. The friction between members of the family forms the centerpiece of the film and Beauvois weaves a complex and unpredictable story without resorting to melodrama.

Unfortunately, when the town’s rumor mill goes into high gear spreading all kinds of rumors, Francine’s future is left on shaky ground. Even more disturbing is the sad news from the front delivered by a local official who just appears at the door. As events unfold, we are drawn closer to each character, able to relate to their hopes and sorrows as if we have known them all of their lives. Though The Guardians is a film of subtlety and restraint, it is also a work of compelling emotional force and one of the year’s best films. 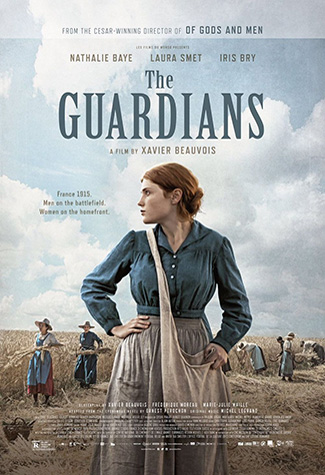