Xavier Dolan opens It’s Only the End of the World with the caption: “Somewhere a while ago, already.” The comma is extremely important, as it plays with the past tense of a while ago and the present tense of the already, almost as a physical presence, already there. It was a while ago since I saw this film, and gave it time to see whether the comma had any merit on its own, whether the film was going to stay with me, carrying over the past to the tense I am in now, already here. But didn’t. The caption could have clearly dispensed with the comma, as, in my experience, it feels like a while ago already, and few has remained from it.

Dolan, that enfant terrible who, at 27, has amassed already an impressive body of work with six films, decided to singlehandedly adapt to screen one of the most widely staged playwrights of the 20th century, Jean-Luc Lagarce, and, for the first time, found himself with a force similar to his: Obscure, intense, longwinded, effusive, indulgent and self-referential, autobiographical to points of diluting the lines between life and work. Yet, it’s clear that Dolan’s sensitivity, as much as it could have been touched by the French writer’s play, is still not quite ready to translate other people’s art (and pain) into his — his thing so far has been placing himself at the center of his work. Even in the comprehensive and, at times, penetrating “Laurence Anyways,” which seems to be telling the story of someone very much other than him, the film (particularly in its most lyrical passages) seems to stem from dreams and fears and fantasies and questions the director has been having/asking about himself. Self-exploration (which has sometimes gotten in the way of self-indulgence, up to the point of aesthetic masturbation) has been Dolan’s dramatic crux. His latest feature departs from this route, and decidedly flies low.

The film opens with Louis (Gaspard Ulliel, “Saint Laurent”) in a flight to visit his family and, basically, “announce [his] death to them.” With his head against the windowpane, Louis’ blood thickens at the mere prospect of flying back after 12 years of absence — then he gets there and we can see why. The place is a shit show. No one really talks to each other; they are much more prone to yell on top of one another, constantly correcting what the other has said or is about to say, whether syntactic, semantic or mnemonic errors that just keep moving towards no direction at all.

This kind of interaction, in which Louis keeps silent, trying to cut a piece of peace so that he can drop the bomb on them, looks like little snippets of resentment. You can see that on their gazes, nearly toxic gases emanating as they look into each other’s eyes and don’t let anybody finish their thought, idea or sentence. A long sentence seems to have hung on them for the longest time, the one Louis tried to escape — perhaps the source behind such ill-feelings, whether they say it or not. The one question that keeps coming as we watch is whether this bipolarity that rules over the household exists as well in Louis’ absence or is it his stay that triggers this mercurial synergy — an orgy of nothingness.

The tense household is divided (emphasized by Dolan’s symmetrical framing, oft from close up to close up to close up) in two sides: Those falling into silent awkwardness, both Louise’s bilious brother, Antoine (Vincent Cassel, “Jason Bourne”), and this latter’s wife, the compassionate and culturally clumsy Catherine (Marion Cotillard, “The Immigrant”), and those falling into riotous noise, Louise’s mother and matriarch of the clan, the overacting (and overacted) Martine (Nathalie Baye, “The Assistant”), and Louise’s sister, the youngest of the brood and nihilistically anxious Suzanne (Léa Seydoux, “Spectre”). Yet, when they’re all together, the only bond between them is a silence that consumes it all, that sucks all the air there is between their bodies. Every exchange bloats like a bubble of methane hydrates erupting into a void, sinking every word, every attempt to communicate anything at all. Those postcards Louise sent to keep some kind of relationship with his family (what Suzanne calls his “elliptic bits”) look like a much more reasonable vehicle to put a message across them, since everyone talks to their self and no one else. The problem is, Dolan seems to do so too.

For Lagarce, this play is not only his most popular, but also one of his most personal. It was like a goodbye letter from a man who was sentenced by AIDS and who knew the time he had left was quite limited. All the subtext in his wordiness emerges from the boiling certainty of his nearing death. The stage, a space (and medium) that allows for this kind of exercises where conversation (or lack thereof, along with the barriers that ensue from trying) and isolation can coexist and, more importantly, where words can drive the motions and movements of both characters and story, cannot be literally translated into film. The best scenes in It’s Only the End of the World are those bereft of words, those where Dolan can set free his own imagination and filmic voice (obsession and self-exploration included), and thus come in those couple of flashbacks where we see Louis doing his best to remember why he still feels such a strong bond to this place.

These flashbacks originate, though, at a film in which it is the absence of memories that drives the whole disconnect amidst its characters. For Suzanne, this is literal, as she has “zero memories” of her brother, and has only idealized the gift he has, the one that has taken him to fame — the gift of writing that has helped him to leave that house (that, as Antoine says, is nothing but a shithole) but that is “of no use for us.” And this absence of memories, and connections, comes in an ever increasingly claustrophobic environment, for more than two thirds of the film happens indoors, with long sequences in each room, and long dyads (they aren’t dialogues) between Louis and each member of his family, including his sister-in-law, who he’s just met that day.

It is at these dyadic exchanges that It’s Only the End of the World delivers its strongest insights as to the estranged relationship between Louis and them — his family. The reasons behind the estrangement are never spelled out (although Antoine does his best to articulate them at what would be the build-up to the climax), yet they are floating, crystal clear, in-between what is said and told. For Louis, these exchanges mean an understanding of his motivations to leave and forget. It is as though he had written every word in his plays to rewrite his memory, where time freezes and where the impossibility to relate to reality can be overridden. Each character shows a deeper side of their self during these alone time with Louis. And that is much appreciated after several bearably watching scenes between people pathetically trying to get along and being clearly unable to do so.

Then we get to realize that Louis has been using his writing, perhaps too much, to create a false nostalgia for himself, and therefore false memories about his family, where color is continuously threatened by the reality he must face with his visit (all in monochromatic blues and grays). What is just a memory for him, healed and treated by distance, is a continued reality for his mother and siblings. And that is what, in part, seems to stand between him and the rest of that world.

So what can Louise do with his past? Keep demanding, for so he has done with his writing. His craft, we see, has been a way to demand from the time that has been left behind to live up to what it was not. The problem he has (that’s why he came back) is that he has less and less time left. The message that took him there is not nearly as important as ending his demands to a time that will leave him behind just as well, a time that will transform him into a physical absence, and not only a figurative one — the one he’s most used to dealing with. So those “things he makes up to fill the void” between him and his family (as Antoine ragingly puts it) are, Louis knows, at the brink of being nothing but a big waste of time. And that’s what he fears more than anything else.

The problem, not so much for Louis as for Dolan, is that this fear kind of grabs the director’s adaptation and cinematographic feel for it. The void, a constant in the director’s work, gives us now no time for release, and, to some extent, it leaves us wasted — and so our time. It is as though It’s Only the End of the World opened a box, peeked inside, and then failed to show us its contents . . . it may be the case that not even Dolan himself knows what’s in it.

So the fear is justified after all — it’s a justified fear. What if it’s all a stylistic gimmick? What if it’s just talent boiling down with nothing there to say? Dolan rambles right to the point: There’s no point. No point in asking, no point in saying anything. He rather takes the route of squeezing a symbol in his finale to kind of make this point come across the room, and the audience. But like the symbol, the point falls flat, as it flies aimlessly, with nowhere to go. 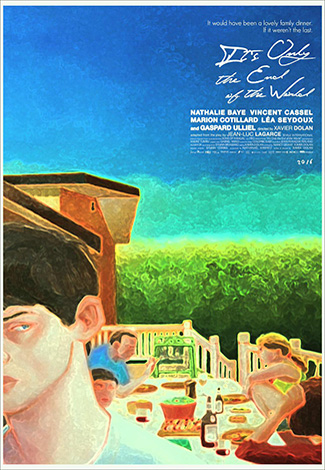